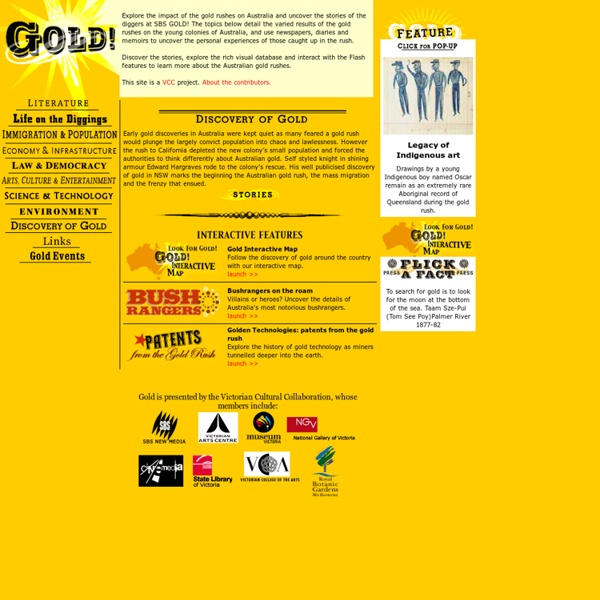 Gold! Gold Rush in Australia Gold is found in rocks and in the ground. People came to look for gold in Australia. Gold is a soft, yellow precious metal. Gold in California and Australia In 1851, during the time that there was a gold rush in California USA, a gold rush began in Australia. However, in Australia, it was not unusual for gold nuggets, some very large, to be found. The California Goldfields. The Largest Australian Nuggets In October 1872 Holtermann's Nugget was found. The Australian gold rush begins Small amounts of gold were found in New South Wales in the early days of the colony, but the authorities hushed it up. Within a week there were over 400 people digging there for gold, and by June there were 2000. Between 1851 and 1861, Australia produced one third of the world's gold. The Victorian goldfields In August 1851, part of New South Wales was made a separate colony, and was named Victoria after the Queen. Click here to see a map showing a few of the main Australian goldfields.

Australian gold rush The 1850s gold rush attracted many Chinese people to Australia in search of a fortune. In this scene, Chinese and European diggers methodically search for gold using various devices and techniques. When gold was discovered When gold was discovered in Australia, the volume of Chinese immigration significantly increased. The Chinese immigrants referred to the Australian gold fields as 'Xin Jin Shan', or the New Gold Mountain. Australian Gold Rush In fact they only got worse. A powerfully disruptive hysteria seemed to grip the State along with the rest of the country. Farmhands simply left their employers with harvests they could no longer reap and thousands of workers fled Melbourne leaving empty industries in their wake. Wages tripled due to scarce labour. To raise money, many property owners put their houses on the market. But as there was no one interested in buying, house prices collapsed. Luckily however, this was not to last. And of course, lucky miners returning from the gold fields spent extravagantly easing the pressure on the suffering Melbourne. The incredible wealth that poured out of Victoria was unthinkable. Robert Coupe says in his book Australia's Gold Rushes (New Holland, 2000) that: "When the first reports of gold in the colonies were published in English newspapers late in 1851, few took much notice. This wealth brought many imports and improvements to Australia.

Australian Gold The community, owners and staff of the Original Gold Rush Colony in Mogo (NSW South Coast Australia) have a wealth of information to share. The information has been gathered over time from their own research and experiences initially through the efforts of Bill Mitchell, Corey Peterson, Sam and Martyn Lloyd and Charlie Hyde, building on the base material provided by Ron Prior. As we gave information, so we received anecdotal input from passionate tourists. This has led to a collation of stories from the wider communities south of Sydney New South Wales - Batemans Bay, Nelligen, Araluen and surrounding South Coast regions and beyond to provide an on-line resource center. This is a collection of fascinating information and bits & pieces covering a wide range of topics including Australian Gold Rush History, 1800s Living Conditions, Gold Information and Australian Aboriginal Culture.

Gold Rush in Australia! The transportation of convicts to Australia was phased out between 1840 and 1868. By 1860, the continent of Australia had been divided into FIVE separate colonies (not officially states yet, mate but seperation away from New South Wales), each not seeing eye-to-eye and exhibiting more loyalty to London to each other. A major force within the colonies was the “squatocracy” – the rich officers and settlers a.k.a. opportunists who had followed the explorers into fertile hinterlands. Gold was originally discovered in Australia by Rev. [NEXT: the birth of a new nation!

The Australian gold rush JCF Johnson, A Game of Euchre, col. wood engraving, Australasian Sketcher Supplement [Melbourne], 25 December, 1876. Image courtesy of the : nla.pic-an8927787. The gold rushes of the nineteenth century and the lives of those who worked the goldfields - known as '' - are etched into our national . There is no doubt that the gold rushes had a huge effect on the Australian economy and our development as a nation. The camaraderie and '' that developed between diggers on the goldfields is still integral to how we - and others - perceive ourselves as Australians. Indeed, mateship and defiance of authority have been central to the way our history has been told. Even today, nothing evokes more widespread national pride than groups of irreverent Aussie 'blokes' beating the English at cricket, or any other sport for that matter! It is this early flowering of a national identity that makes any study of the gold rush days so intriguing. The discovery that changed a nation Gold frenzy Racism Vindication

Australian gold rushes An Australian gold diggings circa 1855 After the California gold rush began in 1848, causing many people to leave Australia for California to look for gold there, the New South Wales government rethought its position, and sought approval from the Colonial Office in England to allow the exploitation of the mineral resources and also offered rewards for the finding of payable gold.[2] The first gold rush in Australia began in May 1851 after prospector Edward Hargraves claimed to have discovered payable gold near Bathurst, at a site he called Ophir.[3] Hargraves had been to the Californian goldfields and had learned new gold prospecting techniques such as panning and cradling. Hargraves was offered a reward by both the Colony of New South Wales and the Colony of Victoria. Before the end of the year, the gold rush had spread to many other parts of the state where gold had been found, not just to the west, but also to the south and north of Sydney.[4] Pre-rush gold finds[edit] F. At E.

Federation The Federation Kiosk, Centennial Park, Sydney at the Proclamation of Federation, 1 January 1901. Image courtesy of the. It's hard to imagine in contemporary Australia, but prior to Federation each of the Australian colonies was more like its own country with customs houses, railway gauges and even their own military. Colonial politicians like Alfred Deakin, Henry Parkes and Edmund Barton waged a long campaign to turn the six colonies of 3.7 million people into a country in its own right. The Father of Federation Henry Parkes. (1815-1896) is often called the 'Father of Federation' for his role as a long-time agitator for the cause. Parkes was five times the Premier of NSW and one of the most prominent men in colonial politics. After a life at the forefront of the Federation movement Henry Parkes died in 1896 without ever seeing his dream realised. The movement gathers momentum The first Referendum In 1898, a referendum was held so that people in the colonies could vote on the constitution.

The Australian Gold Rush www.patricktaylor.com | articles First published April 28th, 2006 The Australian Gold Rush - Diggers (State Library of NSW) Many people associate the Gold Rush with California or the Klondike, but the Australian gold rush remains the world's richest. The discovery of Australian gold Isolated gold finds had been reported in New South Wales since the 1820s, but it was another thirty years before a fully-fledged gold rush would take its hold on the British penal colonies in Australia. In February 1851 Hargraves took his pan and rocking-cradle and with his guide, John Lister, set out on horseback to Lewes Pond Creek, a tributary of the Macquarie River close to Bathurst. Word spread quickly and within a few days 100 diggers were frantically tunnelling for instant wealth. Edward Hargraves did not make a fortune from gold. The discovery in New South Wales and the resulting rush of labour from the adjoining state of Victoria prompted the Governor of Victoria, Charles J. The British perspective

The changing face of early Australia Millions of people from all over the world have made Australia their home. Their lives and experiences have influenced all aspects of Australian life. In particular, the new arrivals, or immigrants, have contributed significantly to the working life of Australia—from , the , the sugar cane fields, and construction sites through and luggers to factories, , cafés and many other business. A lady holding a small child [Quarantine Station], Tom Gray Collection, 3. Eventually, the arrival of people from diverse societies created a cultural diversity that is now an integral part of Australian society and identity. Arrival at the colonies The of Sydney, Melbourne and Fremantle were the main arrival points for people arriving in the colonies from the early 1800s. The development of the port towns of the far north - Brisbane, Townsville and Cairns, from the mid-1800s owed much to the commercial shipping and trading companies, such as Howard Smith and Burns Philp. North Head Quarantine Station . . .