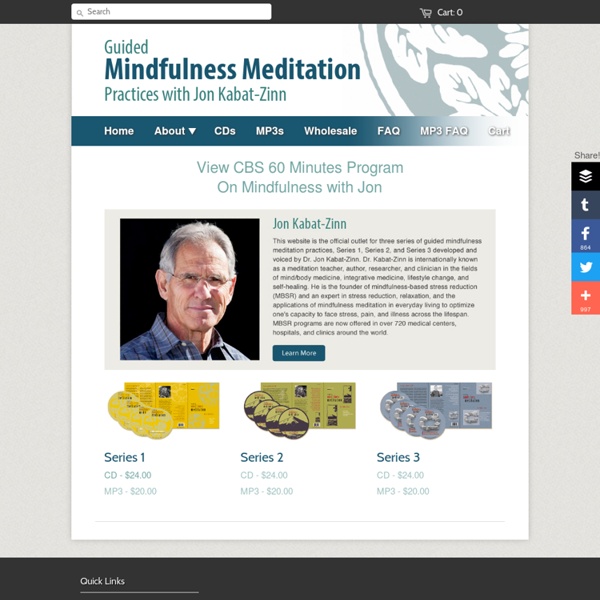 One Half Of Adult Depression Cases Originate In Adolescence Researchers at Bangor and Oxford Universities have discovered that almost 50 percent of adults suffering from clinical depression have had their first encounter with this particular problem in adolescence, noting that lately depression is more commonly found between the ages of 13 and 15. Professor Mark Williams from the Oxford University says that depression cases are increasingly found in teenage patients, unlike several decades ago when depression was mostly observed in middle-aged patients. The appearance of depression in younger patients has turned depression into an important health problem in the past few years. Depression The current study was conducted on 275 patients who were experiencing recurring episodes of depression. Researchers say that depression is known for its recurrence. However, depression can be avoided. Like this: Like Loading...

Eckhart Tolle Eckhart Tolle (/ˈɛkɑrt ˈtɒlə/ EK-art TO-lə; German pronunciation: [ˈɛkaʁt ˈtɔlə], born Ulrich Leonard Tolle on February 16, 1948) is a German-born resident of Canada,[1] best known as the author of The Power of Now and A New Earth. In 2011, he was listed by the Watkins Review as the most spiritually influential person in the world.[2] In 2008, a New York Times writer called Tolle "the most popular spiritual author in the United States".[3] Tolle has said that he was depressed for much of his life until he underwent, at age 29, an "inner transformation". He then spent several years wandering and unemployed "in a state of deep bliss" before becoming a spiritual teacher. Later, he moved to North America where he began writing his first book, The Power of Now, which was published in 1997[4] and reached the New York Times Best Seller lists in 2000.[5] Tolle settled in Vancouver, Canada, where he has lived for more than a decade. Early life and education[edit] Inner transformation[edit]

Meditation: There May Be No Better Time Than Now. « Spacesuit Yoga For those who have been following the Mumbai Siege and the news on the New York Wal-Mart mob murder, I suspect you are as stunned and horrified by the tragedy and madness of late. These are (sigh)… challenging times. Yet in today’s edition of The New York Times‘ Week in Review, we read the following: ‘No matter how stressful the conditions, some of us are just genetically inclined towards calm…. or else we learn to manage the neuroticism.’ I’m not sure claims of suffering from high level cortical stress count in a case of neuroticism. Sure, in Jewish and Italian jokes this side of the Pacific, the motif of the suffering mother lends itself to Freudian and Hollywood overtones. But we’re in the age of a paradigm shift, where cultural stereotypes give way to real time strategies that manage the sweaty, messy corporeality of stress: Crying, Screaming, acting out — the drama of human emotion makes it damn near impossible for some of us to calm ourselves down. QuBitTechnologies, 2007 Dr.

Ramana Maharshi Ramana Maharshi /ˈrʌmənə məˈhɑrʃi/ (1879–1950) is widely acknowledged as one of the outstanding Indian gurus of modern times. He was born as Venkataraman Iyer, in Tiruchuli, Tamil Nadu [note 1] Tamil Nadu (South India). His first years were spent in solitude, but his stillness and his appearance as a sanyassin soon attracted devotees. In later years, he responded to questions, but always insisted that silence was the purest teaching. His verbal teachings flowed "from his direct knowledge that consciousness was the only existing reality." In later years, a community grew up around him, where he was available twenty-four hours a day to visitors. Venkataraman was renamed Bhagavan Sri Ramana Maharshi by one of his earliest followers, Ganapati Muni. Biography[edit] Early years (1879–1896)[edit] Temple of Tiruchuli, Tamil Nadu Family background[edit] Childhood (1879–1895)[edit] Awakening (1895–1896)[edit] After leaving Scott's Middle School, Venkataraman went to the American Mission High School.

How Exercise Fuels the Brain Shannon Stapleton/ReutersDoes exercise keep your brain running? Moving the body demands a lot from the brain. Exercise activates countless neurons, which generate, receive and interpret repeated, rapid-fire messages from the nervous system, coordinating muscle contractions, vision, balance, organ function and all of the complex interactions of bodily systems that allow you to take one step, then another. This increase in brain activity naturally increases the brain’s need for nutrients, but until recently, scientists hadn’t fully understood how neurons fuel themselves during exercise. For many years, scientists had believed that the brain, which is a very hungry organ, subsisted only on glucose, or blood sugar, which it absorbed from the passing bloodstream. That’s where the Japanese researchers came in. The findings of their subsequent follow-up experiment, however, were even more intriguing and consequential. The levels, however, had dropped back to normal within about 24 hours.

Karaniya Metta Sutta: The Discourse on Loving-kindness 1. "He who is skilled in (working out his own) well being, and who wishes to attain that state of Calm (Nibbana) should act thus: he should be dexterous, upright, exceedingly upright, obedient, gentle, and humble. 2. "Contented, easily supportable, with but few responsibilities, of simple livelihood, controlled in the senses, prudent, courteous, and not hanker after association with families. 3. "Let him not perform the slightest wrong for which wise men may rebuke him. 4.& 5. 6. 7. 8. 9. 10.

Audio: Meditation Guided Meditations with Malcolm Huxter Body Scan gives instructions on bringing awareness to bodily sensations. For the most part this exercise is relaxing. Progressive Relaxation gives guidance for a common muscle tension and release exercise often used for stress management. Calming the body with the breath, describes a mindfulness of breath exercise coupled with relaxation. Cultivating peace and joy with the breath, is an extension of the track "Calming the body with the breath". Mindful Standing and Walking, provides simple instructions for mindful standing and walking. Mindfulness of Breath gives instructions for mindfulness of breath, as is it experienced as movement in the abdomen. Mindfulness of sound and thought, firstly instructs on how to use sound as an object of meditation then asks the listener to shift attention to thoughts. Open awareness. A guided Loving kindness meditation.