This Will Make You Smarter: 151 Big Thinkers Each Pick a Concept to Enhance Your Cognitive Toolkit 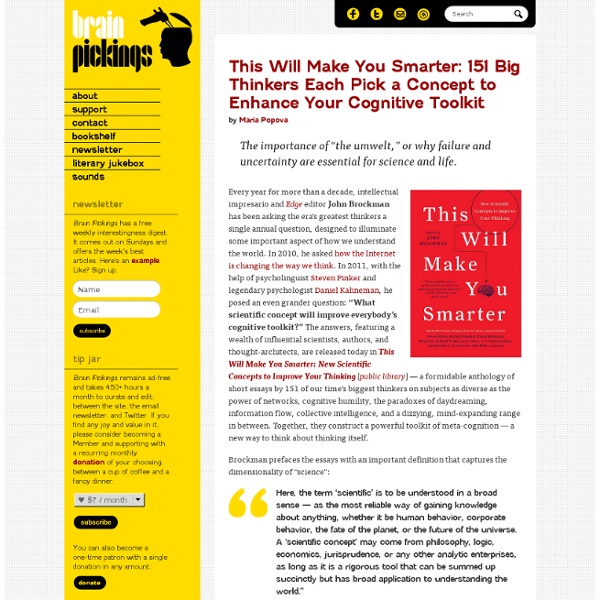 by Maria Popova The importance of “the umwelt,” or why failure and uncertainty are essential for science and life. Every year for more than a decade, intellectual impresario and Edge editor John Brockman has been asking the era’s greatest thinkers a single annual question, designed to illuminate some important aspect of how we understand the world. In 2010, he asked how the Internet is changing the way we think. In 2011, with the help of psycholinguist Steven Pinker and legendary psychologist Daniel Kahneman, he posed an even grander question: “What scientific concept will improve everybody’s cognitive toolkit?” Brockman prefaces the essays with an important definition that captures the dimensionality of “science”: Here, the term ‘scientific’ is to be understood in a broad sense — as the most reliable way of gaining knowledge about anything, whether it be human behavior, corporate behavior, the fate of the planet, or the future of the universe. Marketers exploit the focusing illusion.

Be brave. Even if you're not, pretend to be. No... #random but #inspirational by @koqoo #kkoolook series by @koqoo 20 more awesomely untranslatable words from around the world If only you could use these words in Scrabble. Photo: Jeremy Mates When linguists refer to “untranslatable” words, the idea is not that a word cannot somehow be explained in another language, but that part of the essence of the word is lost as it crosses from one language to another. This often is due to different social and cultural contexts that have shaped how the word is used. In the novel Shame, Salman Rushdie’s narrator suggests: “To unlock a society, look at its untranslatable words.” 25 Handy Words That Simply Don’t Exist In English Approximately 375 million people speak English as their first language, in fact it's the 3rd most commonly spoken language in the world (after Mandarin Chinese and Spanish). Interestingly enough it's the number 1 second language used worldwide - which is why the total number of people who speak English, outnumber those of any other. But whilst it's the most widely spoken language, there's still a few areas it falls down on (strange and bizarre punctuation rules aside).

Wabi-Sabi: Translating the Beauty in Imperfection Wabi-sabi. It’s a concept, an aesthetic, and a worldview. It’s also a phrase that doesn’t translate directly from Japanese into English, and the ideas behind it may not immediately translate in the minds of those who haven’t encountered it before. Creativity Quotes From Mycoted The quotations here fall into two main categories. The first category is from people who have had a very restricted vision, with hindsight their comments can be used as powerful examples of what can happen if you don't allow creative thoughts to flourish. The second category is from people who have had a much more creative, open view of life. "Computers in the future may weigh no more than 1.5 tons."

Biblical names: meaning and etymology of Hebrew, Greek and Latin Bible names Abarim Publications' world famous Biblical Name Vault ← Biblical names: meaning and etymology Use the menu to the left to peruse our vast and ever growing collection of articles on Hebrew and Greek names that occur in the Bible. For each Biblical name you'll find: Feast Your Eyes on This Beautiful Linguistic Family Tree 552K 18.4KShare337 When linguists talk about the historical relationship between languages, they use a tree metaphor. An ancient source (say, Indo-European) has various branches (e.g., Romance, Germanic), which themselves have branches (West Germanic, North Germanic), which feed into specific languages (Swedish, Danish, Norwegian). Lessons on language families are often illustrated with a simple tree diagram that has all the information but lacks imagination. There’s no reason linguistics has to be so visually uninspiring.

Adult Numeracy Themes: Competence and Self-Confidence; Part I COMPETENCE AND SELF-CONFIDENCE The loss of self-confidence in math, the lack of understanding of particular math concepts, and the fear of math inhibits power. Many adults do not feel confident, competent, nor comfortable in math. Many adult learners are frustrated because they do not feel comfortable in math. Adults fear math. For some, frustration with math spreads to frustration in other areas of school as well. Is this lack of confidence in math because people are limited or lack the ability to learn?

Math Success Math Success Math Success + MBA Online Degrees = Rewarding Career Options Students who are successful in other subjects often have difficulty with math. Learning Guitar After Age 40 So I bought my wife a guitar a couple years back, and suggested that she takes guitar lessons. She only played it a couple of times as it wasn't really her thing, but she did notice that I was fascinated by it. Not long after, my wife and my daughter, bought me a Seagull S6 Original guitar.

DIY » Something Turquoise {daily bridal inspiration} We are SO glad that you have found your way to our creative wedding blog! Everyday we share new and unique wedding inspiration that is carefully curated for the DIY bride. Take some time to click around our site to get to know us, follow us on your favorite social media channel and be sure to check out our DIY page... we have well over 250, detailed tutorials to help you craft the perfect wedding - one project at a time.

Related:
Related:  janiceheal   -  The Horror that We can somehow become   -  Meyiwa’s murder shocks the nation   -  Get smarter   -  How to become a freelance reporter? 10 resources   -  Birth of our Nation   -  Smarter Content   -  How to become a personal development coach   -  Smarter Balanced Digital Library   -  My Phone is Smarter That I AM   -  Brainz — Learn something new today.   -  Interview : Pierre Lévy   -  Oddity Central - Weird Places, Odd Events, Bizarre News, Strange People and A Lot More   -  elephant journal: Yoga, Sustainability, Politics, Spirituality.   -  SytiNet Sommaire   -  The Obama Deception HQ Full length version - YouTube   -  Art Clothing, Sublimation Tees, Art Prints, Visionary Artwork   -  Paste the text you want to speed read   -  Home - Smarter Balanced Assessment Consortium   -  An Optical Illusion that Explains the Origins of Imaginary Monsters   -  Baked Almond Feta   -  The Australian gold rush | australia.gov.au   -  12 Rules for Being a Human Being   -  The Science of Procrastination and How to Manage It, Animated | Brain Pickings   -  25 Documentaries Everybody Should Watch | High Existence   -  BQO | Big Questions Online   -  The Science of “Intuition” | Brain Pickings   -  How Life Works   -  How To Design a Lucky Life   -  Do we live in a computer simulation? UW researchers say idea can be tested   -  What Are Your Values? - Decision-Making Skills from MindTools.com   -  PsyBlog’s 10 Most Popular Psychological Insights From 2012 — PsyBlog   -  MOOC List | Massive Open Online Courses a complete list of free* online courses offered by the best universities and entities   -  How to Identify Your Passions   -  Why Focus Makes Us Smarter--and 8 Ways to Sharpen Yours | Big Think   -  A Scientific Guide to Saying "No": How to Avoid Temptation and Distraction - The Buffer Blog   -  Lawrence Lessig: We the People, and the Republic we must reclaim | Video on TED.com   -  Michel Bauwens: Four Scenarios for the Collaborative Economy - YouTube