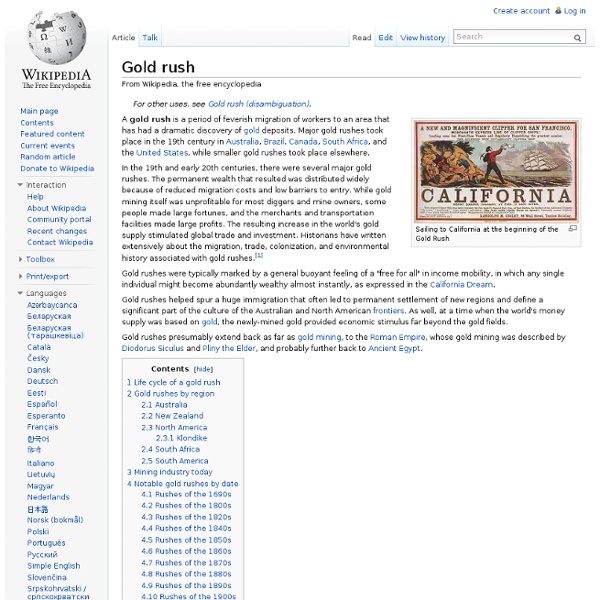 Sailing to California at the beginning of the Gold Rush A gold rush is a period of feverish migration of workers to an area that has had a dramatic discovery of gold deposits. Major gold rushes took place in the 19th century in Australia, New Zealand, Brazil, Canada, South Africa, and the United States, while smaller gold rushes took place elsewhere. In the 19th and early 20th centuries, there were several major gold rushes. The permanent wealth that resulted was distributed widely because of reduced migration costs and low barriers to entry. While gold mining itself was unprofitable for most diggers and mine owners, some people made large fortunes, and the merchants and transportation facilities made large profits. Gold rushes were typically marked by a general buoyant feeling of a "free for all" in income mobility, in which any single individual might become abundantly wealthy almost instantly, as expressed in the California Dream. Life cycle of a gold rush[edit] Australia[edit]

The Australian gold rush JCF Johnson, A Game of Euchre, col. wood engraving, Australasian Sketcher Supplement [Melbourne], 25 December, 1876. Image courtesy of the : nla.pic-an8927787. The gold rushes of the nineteenth century and the lives of those who worked the goldfields - known as '' - are etched into our national . There is no doubt that the gold rushes had a huge effect on the Australian economy and our development as a nation. It is also true to say that those heady times had a profound impact on the national psyche. Gold Rush in Australia! The transportation of convicts to Australia was phased out between 1840 and 1868. By 1860, the continent of Australia had been divided into FIVE separate colonies (not officially states yet, mate but seperation away from New South Wales), each not seeing eye-to-eye and exhibiting more loyalty to London to each other. A major force within the colonies was the “squatocracy” – the rich officers and settlers a.k.a. opportunists who had followed the explorers into fertile hinterlands. They simply laid claim to or “squatted” upon enormous tracts of land, often 20,000 acres and more.

Australian Gold Rush In fact they only got worse. A powerfully disruptive hysteria seemed to grip the State along with the rest of the country. Farmhands simply left their employers with harvests they could no longer reap and thousands of workers fled Melbourne leaving empty industries in their wake.

Gold! Gold Rush in Australia Gold is found in rocks and in the ground. People came to look for gold in Australia. It was called the Gold Rush. Clarke brothers Thomas (1840?-1867) and John Clarke (1846?-1867) were Australian bushrangers from the Braidwood district of New South Wales responsible for a series of high-profile robberies and killings in the late 19th century so notorious that they led to the embedding of the Felons' Apprehension Act (1866), a law that introduced the concept of outlawry and authorised citizens to kill criminals on sight.[1] Active on the southern goldfields from 1865, Thomas, John, their brother James and a host of relations were responsible for a reported 36 hold-ups and the deaths of five policemen - four of them "special constables" bounty hunters - looking to bring them in. In 1866, the gang held the town of Michelago, New South Wales captive while awaiting the arrival a gold escort from Kiandra. Some modern-day writers have described the Clarkes as the "bloodiest" bushrangers of all.

Australian gold rushes An Australian gold diggings circa 1855 After the California gold rush began in 1848, causing many people to leave Australia for California to look for gold there, the New South Wales government rethought its position, and sought approval from the Colonial Office in England to allow the exploitation of the mineral resources and also offered rewards for the finding of payable gold.[2] The first gold rush in Australia began in May 1851 after prospector Edward Hargraves claimed to have discovered payable gold near Bathurst, at a site he called Ophir.[3] Hargraves had been to the Californian goldfields and had learned new gold prospecting techniques such as panning and cradling.

Australian gold rush timeline, HSIE, Discovering gold, Gold! Year 6, NSW The first major mineral discovery - gold - was a watershed (a turning point or landmark) for Australian society. The initial stages of the gold rush were responsible for tremendous changes in the community, bringing Australia's first great waves of immigration from countries other than England and Ireland. Ambitious prospectors from Asia, Europe and America made the trek to the goldfields of Ballarat and Bendigo in Victoria, and Bathurst in New South Wales, in the hope of striking it rich.

Gold Rush Facts As of July 1, 2013 ThinkQuest has been discontinued. We would like to thank everyone for being a part of the ThinkQuest global community: Students - For your limitless creativity and innovation, which inspires us all. Fun Facts and interesting information of the gold rush era. Miners made any where from twelve to thirty-five dollars per ounce of gold. This may seem like it was a lot of money for one ounce of gold and it was in those days. All of the supply prices were increased due to supply and demand.

John Clarke (Baptist minister) John Clarke (8 October 1609 – 20 April 1676) was a medical doctor, Baptist minister, co-founder of the colony of Rhode Island and Providence Plantations, author of its influential charter, and a leading advocate of religious freedom in the Americas. Clarke was born at Westhorpe in the county of Suffolk, England on October 8, 1609, to Thomas and Rose (Kerrich) Clarke. He was one of eight children, six of whom moved to America and settled in New England. According to the well known genealogical work One Hundred and Sixty Allied Families,by John Osborne Austin (Salem, Massachusetts 1893), Clarke's first wife was Elizabeth Harges, daughter of John Harges. John Clarke was married three times according to this source. His second wife was Jane Fletcher, a widow, and his third wife was Sarah Davis, by whom he left a long line of American descendants.