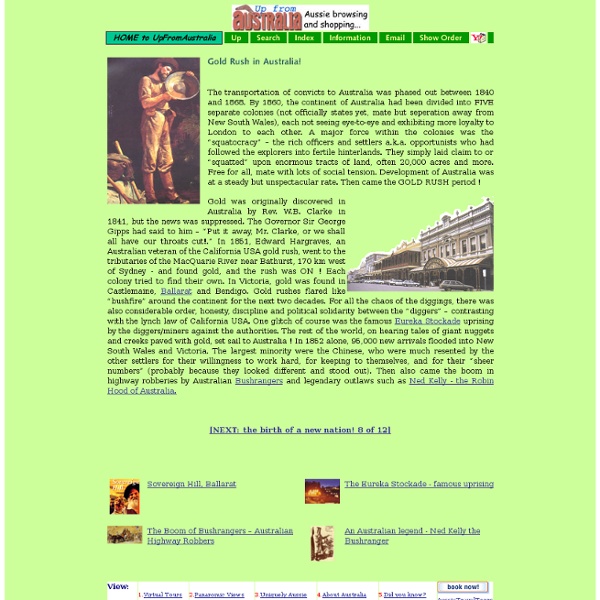 The transportation of convicts to Australia was phased out between 1840 and 1868. By 1860, the continent of Australia had been divided into FIVE separate colonies (not officially states yet, mate but seperation away from New South Wales), each not seeing eye-to-eye and exhibiting more loyalty to London to each other. A major force within the colonies was the “squatocracy” – the rich officers and settlers a.k.a. opportunists who had followed the explorers into fertile hinterlands. They simply laid claim to or “squatted” upon enormous tracts of land, often 20,000 acres and more. Free for all, mate with lots of social tension. Development of Australia was at a steady but unspectacular rate. Gold was originally discovered in Australia by Rev. [NEXT: the birth of a new nation!

Australian gold rushes An Australian gold diggings circa 1855 After the California gold rush began in 1848, causing many people to leave Australia for California to look for gold there, the New South Wales government rethought its position, and sought approval from the Colonial Office in England to allow the exploitation of the mineral resources and also offered rewards for the finding of payable gold.[2] The first gold rush in Australia began in May 1851 after prospector Edward Hargraves claimed to have discovered payable gold near Bathurst, at a site he called Ophir.[3] Hargraves had been to the Californian goldfields and had learned new gold prospecting techniques such as panning and cradling. Hargraves was offered a reward by both the Colony of New South Wales and the Colony of Victoria. Before the end of the year, the gold rush had spread to many other parts of the state where gold had been found, not just to the west, but also to the south and north of Sydney.[4] Pre-rush gold finds[edit]

Australian Gold Rush In fact they only got worse. A powerfully disruptive hysteria seemed to grip the State along with the rest of the country. Farmhands simply left their employers with harvests they could no longer reap and thousands of workers fled Melbourne leaving empty industries in their wake. Wages tripled due to scarce labour. To raise money, many property owners put their houses on the market. But as there was no one interested in buying, house prices collapsed.

The Australian gold rush JCF Johnson, A Game of Euchre, col. wood engraving, Australasian Sketcher Supplement [Melbourne], 25 December, 1876. Image courtesy of the : nla.pic-an8927787. The gold rushes of the nineteenth century and the lives of those who worked the goldfields - known as '' - are etched into our national . There is no doubt that the gold rushes had a huge effect on the Australian economy and our development as a nation. Clarke brothers Thomas (1840?-1867) and John Clarke (1846?-1867) were Australian bushrangers from the Braidwood district of New South Wales responsible for a series of high-profile robberies and killings in the late 19th century so notorious that they led to the embedding of the Felons' Apprehension Act (1866), a law that introduced the concept of outlawry and authorised citizens to kill criminals on sight.[1] Active on the southern goldfields from 1865, Thomas, John, their brother James and a host of relations were responsible for a reported 36 hold-ups and the deaths of five policemen - four of them "special constables" bounty hunters - looking to bring them in. In 1866, the gang held the town of Michelago, New South Wales captive while awaiting the arrival a gold escort from Kiandra.

Australian gold rush timeline, HSIE, Discovering gold, Gold! Year 6, NSW The first major mineral discovery - gold - was a watershed (a turning point or landmark) for Australian society. The initial stages of the gold rush were responsible for tremendous changes in the community, bringing Australia's first great waves of immigration from countries other than England and Ireland. Ambitious prospectors from Asia, Europe and America made the trek to the goldfields of Ballarat and Bendigo in Victoria, and Bathurst in New South Wales, in the hope of striking it rich. This influx of people brought many social changes, including an increase in racial tensions with the persecution of some groups, notably the Chinese. Government Surveyor James McBrien discovers traces of gold in the Fish River, east of Bathurst. Explorer and geologist Paul de Strzelecki discovers small amounts of gold in silicate near Hartley in the Blue Mountains.

Eureka! The rush for gold The gold rushes and the diggers who worked the goldfields are etched into Australian folklore. Follow the story of the people who sought the glittering prize. Edward Hammond Hargraves is credited with finding the first payable goldfields at Ophir, near Bathurst, New South Wales, on 12 February 1851. News of gold spread quickly around the world and in 1852 alone, 370,000 immigrants arrived in Australia. Gold! Gold Rush in Australia Gold is found in rocks and in the ground. People came to look for gold in Australia. GOLD The gold fields were Australia’s first experience of a truly diverse population. The largely British population expanded to include people from all over the world, creating a diverse mix of language and culture. Polish digger Seweryn Korzelinski wrote in his memoirs "a happy-go-lucky German tailor, a brawny English smith, a slightly-built French cook, a Polish Jew, an American or Dutch sailor, watchmaker, confectioner, a Swiss hat-maker, an impoverished Spanish hidalgo, gather near a mound of earth and one can see amongst them here and there a black Negro head, a brown Hindu face or the olive countenance with slanting eyes of a ‘child of the sun’. Elsewhere in a group a Swedish sailor away from his whaling ship, a Norwegian reindeer herdsman, a gaucho from La Plata, a Creole from Malabar or Mozambique and many others sit together. The diggers’ life Most of these migrants lived harmoniously on the gold fields.

Gold rush Sailing to California at the beginning of the Gold Rush A gold rush is a period of feverish migration of workers to an area that has had a dramatic discovery of gold deposits. Major gold rushes took place in the 19th century in Australia, New Zealand, Brazil, Canada, South Africa, and the United States, while smaller gold rushes took place elsewhere. In the 19th and early 20th centuries, there were several major gold rushes. Discovery of Gold Discovery of Gold - A Brief History In 1837, under pressure of a bad drought, Thomas Learmonth and a group of squatters explored the area to the north of their settlement near Geelong in search of better watered regions. On this journey they reached and climbed Mt. Bonan Yowing (now Buninyong) and were thus the first to see the Ballarat area. In March 1838, two squatters, Yuille and Anderson, settled with their flocks on the banks of an area known as Black Swamp, now Lake Wendouree. During the next 13 years, shepherds and their flocks roamed in the area with Buninyong becoming the service township for the settlers.