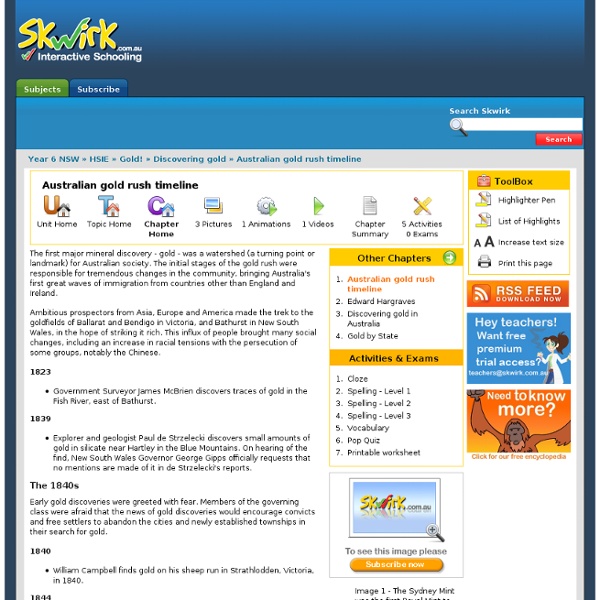 The first major mineral discovery - gold - was a watershed (a turning point or landmark) for Australian society. The initial stages of the gold rush were responsible for tremendous changes in the community, bringing Australia's first great waves of immigration from countries other than England and Ireland. Ambitious prospectors from Asia, Europe and America made the trek to the goldfields of Ballarat and Bendigo in Victoria, and Bathurst in New South Wales, in the hope of striking it rich. This influx of people brought many social changes, including an increase in racial tensions with the persecution of some groups, notably the Chinese. Government Surveyor James McBrien discovers traces of gold in the Fish River, east of Bathurst. Explorer and geologist Paul de Strzelecki discovers small amounts of gold in silicate near Hartley in the Blue Mountains. The 1840s Early gold discoveries were greeted with fear. William Campbell finds gold on his sheep run in Strathlodden, Victoria, in 1840.

Stage 3 Gold Virtual Build July 3, 2012 by mrsbooth006 · 3 Comments · Education Stage 3 classes finished up with their HSIE Gold! unit last week. Many of the grade 5 students had been working on a virtual simulation of a gold rush town and the end result is wonderful. Mrs Booth filmed the build today but there were a few glitches with the program she was using! The Australian Gold Rush www.patricktaylor.com | articles First published April 28th, 2006 The Australian Gold Rush - Diggers (State Library of NSW)

Discovery of Gold Discovery of Gold - A Brief History In 1837, under pressure of a bad drought, Thomas Learmonth and a group of squatters explored the area to the north of their settlement near Geelong in search of better watered regions. On this journey they reached and climbed Mt. Bonan Yowing (now Buninyong) and were thus the first to see the Ballarat area. Stage 3 Gold! June 23, 2012 by mrsbooth006 · No Comments · Education Coffs Harbour Public School Stage 3 students were transported back in time to the days of the gold rush on Wednesday. During term 2, they all have been working on a HSIE unit on the discovery of gold in Australia. Last Wednesday students were involved in a variety of activities including barn dancing, making a campsite (they had to have at least 3 items including a tent per group), stockade, BBQ, weighing gold, photos, alluvial gold hunt etc. It was a great day and the students enjoyed themselves immensely.

The Australian gold rush JCF Johnson, A Game of Euchre, col. wood engraving, Australasian Sketcher Supplement [Melbourne], 25 December, 1876. Image courtesy of the : nla.pic-an8927787. The gold rushes of the nineteenth century and the lives of those who worked the goldfields - known as '' - are etched into our national . There is no doubt that the gold rushes had a huge effect on the Australian economy and our development as a nation. It is also true to say that those heady times had a profound impact on the national psyche. The camaraderie and '' that developed between diggers on the goldfields is still integral to how we - and others - perceive ourselves as Australians. Australian Gold Rush In fact they only got worse. A powerfully disruptive hysteria seemed to grip the State along with the rest of the country. Farmhands simply left their employers with harvests they could no longer reap and thousands of workers fled Melbourne leaving empty industries in their wake. Wages tripled due to scarce labour.

Searching for Gold: A Collaborative Inquiry Project ReadWriteThink couldn't publish all of this great content without literacy experts to write and review for us. If you've got lessons plans, activities, or other ideas you'd like to contribute, we'd love to hear from you. More

Australian Gold Rush Diggers - Immigrants to Australia Prior to Edward Hargraves' 1851 discovery of gold near Bathurst, New South Wales, Britain regarded the distant colony of Australia as little more than a penal settlement. The promise of gold, however, attracted thousands of "voluntary" settlers in search of their fortune, and ultimately ended Britain's practice of transporting convicts to the colonies. Within weeks of Hargraves' discovery, thousands of laborers were frantically digging at Bathurst, with hundreds more arriving daily. This prompted the Governor of Victoria, Charles J. La Trobe, to offer a £200 reward to anyone who found gold within 200 miles of Melbourne. Australia's migration history timeline Era: 1840 - 1900Cultural background: Chinese, EnglishCollection: Powerhouse MuseumTheme:Gold Government Labour Movement Miners Riots Settlement Licence for gold mining, 1853. Courtesy of the Powerhouse Museum

Gold! Gold Rush in Australia Gold is found in rocks and in the ground. People came to look for gold in Australia. It was called the Gold Rush. It was a hard life digging for gold. Gold rush history - Australia's Golden Outback The Western Australian gold rush began with the first discovery of gold in the late 1890s. News of the gold spread as fast as the region’s wildfires and soon gold prospectors were arriving to seek their fortune and set up gold rush towns in the dusty landscapes of the Kalgoorlie, Goldfields and Murchison regions. They came slowly at first, but as the finds grew so too did the population. Lonely clusters of tents and rough bough sheds were soon transformed into booming Western Australian gold rush towns. Grand hotels lined the main streets and bustling town centres soon boasted butchers, bakers, schools and churches. And with the completion of the Golden Pipeline, this arid region was given a constant supply of fresh water.

Gold Rush in Australia! The transportation of convicts to Australia was phased out between 1840 and 1868. By 1860, the continent of Australia had been divided into FIVE separate colonies (not officially states yet, mate but seperation away from New South Wales), each not seeing eye-to-eye and exhibiting more loyalty to London to each other. A major force within the colonies was the “squatocracy” – the rich officers and settlers a.k.a. opportunists who had followed the explorers into fertile hinterlands. They simply laid claim to or “squatted” upon enormous tracts of land, often 20,000 acres and more. Free for all, mate with lots of social tension.