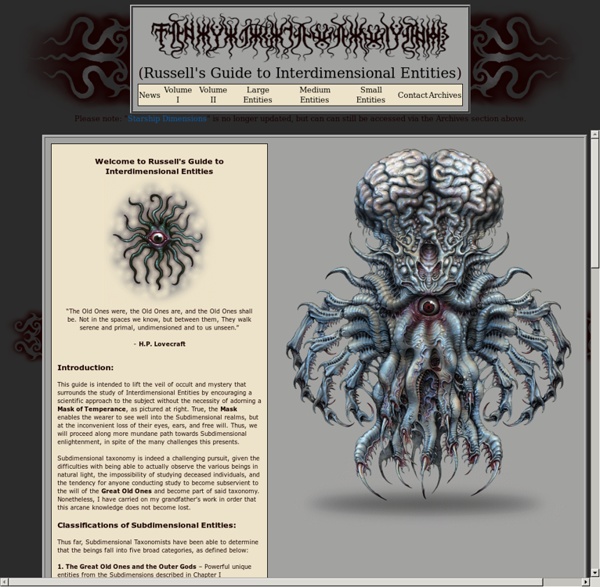 qcOSC Description The plug-in was created because there seems to be a problem with the built-in OSC receiver in QC in that it sometimes outputs 0’s instead of the last received numeric value, causing something best described as “stuttering” when used for visual output. Additionally the plug-in automatically creates its outlets when receiving messages and advertises its input port via Zeroconf (otherwise know as Bonjour in Apple-land.) Installation

Larissa Meek » Blog Archive » 26 Cakes Perfect for Geeks Here is the most awesome list of cakes and cupcakes (perfect for Geeks). 1. Geek Cupcakes!!! Too Cute! These are by far my favorite cupcakes EVER! The Metropolitan Museum of Art, New York - StumbleUpon The exhibition, organized by The Costume Institute, celebrated the late Alexander McQueen’s extraordinary contributions to fashion. From his Central Saint Martins postgraduate collection of 1992 to his final runway presentation, which took place after his death in February 2010, Mr. McQueen challenged and expanded the understanding of fashion beyond utility to a conceptual expression of culture, politics, and identity. His iconic designs constitute the work of an artist whose medium of expression was fashion. The exhibition featured approximately one hundred ensembles and seventy accessories from Mr. McQueen’s prolific nineteen-year career.

Brand identity style guides from around the world This is great! The University of Connecticut has a nice one designed by Peter Good. Web and link to PDF version. Control Tutorial – how to create your own widgets Control user boblemarin, who is the author of the impressive Sprite3D javascript library, has made a couple of interesting new widgets. The first is a circle sliced into triangles; each segment can be used to trigger, for example, slices of a loop. He made a short demo video of two of these widgets doing exactly that: He also has an interface using particles that are generated by touch and send out note messages whenever they bounce off the walls of the interface.

Lucy Knisley - The First Six Books! These are awesome! I love the style. And 'Cho the one that I want' is one of the very best puns I've ever heard. Bravo. Pick & Chose from these 300+ Winterboard & Summerboard Themes screenshotst Advertisements I’ve been collecting for a good while now all the full sized Screenshots of Winterboard themes I could put my hands on and decided to make them available online here. This adds up to over 300 themes for now and I’ll be updating as fresh new ones come out. If you have any to share with me please send me them I’ll be glad to add them to the list. Most of these Winterboard & Summerboard themes are available for free via Cydia or the installer.app. Swedish VJ Union I couldn’t have imagined a better start of the year when it comes to software and hardware. So many good things has been announced and released already. Let’s have a look at some stuff that relates to us visualists. Read more →

How to backup and convert Blu-ray to MP4 HD or MKV HD - VideoHelp Forum This guide will describe how to convert your own Blu-ray Disc video to a single MP4 HD or MK4 HD file that can be played on computers, HTPC and media centers like the Popcorn Hour, Tvix, etc. You could also use this guide to just shrink Blu-ray and output as a new Blu-ray Disc / AVCHD. You need of course a Blu-ray reader like a Blu-ray ROM or Blu-ray Writer and lots of HDD space. Tools required:AnyDVD($110) or you could try free DumpHD but it does not support newer movies with BD+.Ripbot264(free) and it requires that you have installed .Net Framework 2.0, Avisynth, ffdshow, Haali media splitter.suprip (if you need subtitles).Preparation Install AnyDVD.If you are in Windows Vista, you have to disable UAC(User Account Control) and run as administrator.