Catalina Sky Survey. Light Curve of a Planet Transiting Its Star. Methods of detecting exoplanets. Number of extrasolar planet discoveries per year through September 2014, with colors indicating method of detection: Any planet is an extremely faint light source compared to its parent star. 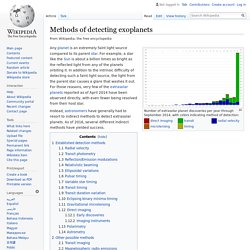 For example, a star like the Sun is about a billion times as bright as the reflected light from any of the planets orbiting it. In addition to the intrinsic difficulty of detecting such a faint light source, the light from the parent star causes a glare that washes it out. For those reasons, very few of the extrasolar planets reported as of April 2014[update] have been observed directly, with even fewer being resolved from their host star. Instead, astronomers have generally had to resort to indirect methods to detect extrasolar planets. 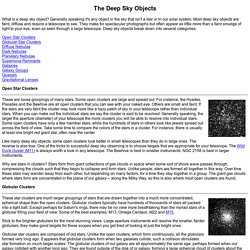 Generally speaking it's any object in the sky that isn't a star or in our solar system. Most deep sky objects are faint, diffuse and require a telescope to see. They make for spectacular photographs but often appear as little more than a faint smudge of light to your eye, even as seen through a large telescope. Deep sky objects break down into several categories: Open Star ClustersGlobular Star ClustersDiffuse NebulaeDark NebulaePlanetary NebulaeSupernova RemnantsGalaxiesGalaxy GroupsQuasarsGravitational Lenses Open Star Clusters These are loose groupings of many stars. Like many deep sky objects, some open clusters look better in small telescopes than they do in large ones. Why are stars in clusters? Globular Clusters These star clusters are much larger groupings of stars that are drawn together into a much more concentrated, spherical shape than the open clusters. Stick to the brighter globulars for the most stunning views.

Diffuse Nebulae Dark Nebulae Galaxies. Big Cigar Astronomy. What is apparent magnitude? Astrophysics. Grandfather paradox. The grandfather paradox is a proposed paradox of time travel first described by the science fiction writer René Barjavel in his 1943 book Le Voyageur Imprudent (Future Times Three).[1] The paradox is described as following: the time traveller went back in time to the time when his grandfather had not married yet. 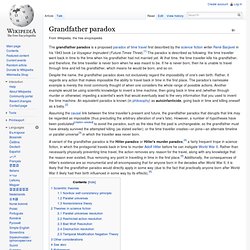 Rather, it regards any action that makes impossible the ability to travel back in time in the first place. Getting started. Interesting note here. I'm sure it occurs in… Universe & Multiverse. Add further research on videos: Cosmos: A SPACETIME ODYSSEY on FOX - Watch the "Standing Up In The Milky Way" Episode. Lecture - Stephen Hawking and site. Directions on youtube. Fred Hoyle. Antigravity - youtube search. Black Holes - Science Background. A few words from the scientist Selected references Science background: The following information is provided to give the teacher some additional knowledge about the effect of gravity and black holes. 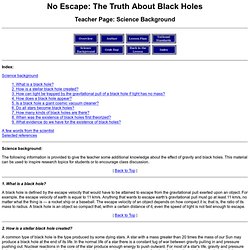 This material can be used to inspire research topics for students or to encourage class discussion. | Back to Top | 1. A black hole is defined by the escape velocity that would have to be attained to escape from the gravitational pull exerted upon an object. 2. A common type of black hole is the type produced by some dying stars. To create a massive core a progenitor (ancestral) star would need to be at least 20 times more massive than our Sun. 3. Newton thought that only objects with mass could produce a gravitational force on each other.

One way to picture this effect of gravity is to imagine a piece of rubber sheeting stretched out. 4. A black hole itself is invisible because no light can escape from it. 5. Astrophysics. Lagrange Points of the Earth-Moon System. A mechanical system with three objects, say the Earth, Moon and Sun, constitutes a three-body problem. The three-body problem is famous in both mathematics and physics circles, and mathematicians in the 1950s finally managed an elegant proof that it is impossible to solve. However, approximate solutions can be very useful, particularly when the masses of the three objects differ greatly. For the Sun-Earth-Moon system, the Sun's mass is so dominant that it can be treated as a fixed object and the Earth-Moon system treated as a two-body system from the point of view of a reference frame orbiting the Sun with that system. 18th century mathematicians Leonhard Euler and Joseph-Louis Lagrange discovered that there were five special points in this rotating reference frame where a gravitational equilibrium could be maintained.

That is, an object placed at any one of these five points in the rotating frame would stay there, with the effective forces with respect to this frame canceling. Is Warp Drive Physically Possible?