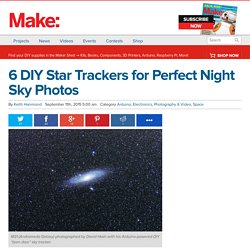 To photograph the stars, you need a gadget that can track the revolving night sky in a perfectly timed arc. Otherwise all you’ll see is streaks and blurs. You can buy fancy motorized “equatorial mounts” for telescopes and cameras, but it’s way cheaper and more satisfying to build your own simple “barn door” tracking mount using a long bolt or threaded rod as a drive screw. Tangent Error Minimized Tracker: a Double Arm Drive « Synergous.com. Tangent Error Minimized Tracker: a Double Arm Drive Double Arm Drives have been used to photograph the night sky for over 20 years. 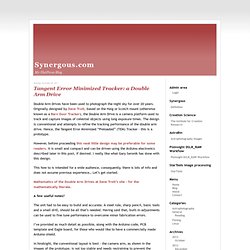 Originally designed by Dave Trott, based on the Haig or Scotch mount (otherwise known as a Barn Door Tracker), the Double Arm Drive is a camera platform used to track and capture images of celestial objects using long exposure times. The design is conventional and attempts to refine the tracking performance of the double arm drive. Hence, the Tangent Error Minimized “Preloaded” (TEM) Tracker - this is a prototype.

However, before proceeding this neat little design may be preferable for some readers. How to Turn Your Old 35mm SLR into a New 21 Megapixel Digital SLR. If you have a 35mm film SLR camera laying around you may have some options that you have never considered. 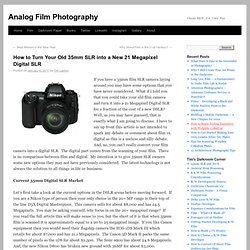 What if I told you that you could take your old film camera and turn it into a 21 Megapixel Digital SLR for a fraction of the cost of a new DSLR? Well, as you may have guessed, that is exactly what I am going to discuss. I have to say up front this article is not intended to spark any debate or comment about film vs. digital as this is a useless and silly debate. And, no, you can’t really convert your film camera into a digital SLR. The digital part comes from the scanning of your film. Current 35mm Digital SLR Market. Double Arm Barn Door Drive. Astronomy Links Page. In 1971, when I started building telescopes, finding parts meant visiting plumbing supply houses, junkyards, surplus warehouses, and making lots and lots of phone calls. 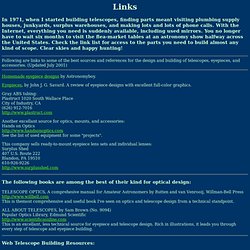 With the Internet, everything you need is suddenly available, including used mirrors. You no longer have to wait six months to visit the flea-market tables at an astronomy show halfway across the United States. Check the link list for access to the parts you need to build almost any kind of scope. Clear skies and happy hunting! Following are links to some of the best sources and references for the design and building of telescopes, eyepieces, and accessories. Homemade eyepiece designs by Astronomyboy.

Eyepieces, by John J. Gray ABS tubing: Plastruct 1020 South Wallace Place City of Industry, CA (626) 912- Another excellant source for optics, mounts, and accessories: Hands on See the list of used equipment for some "projects". Reflector telescopes. Easier to build, easier to use, and less expensive than a Dobsonian! 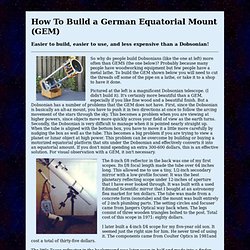 So why do people build Dobsonians (like the one at left) more often than GEMS (the one below)? Probably because many people have woodworking equipment but few people have a metal lathe. An Affordable, Motorized Barn Door. Dave Trott - Double Arm Barn Door. Barndoor Mount. Telescope Barndoor Project. While being able to track stars accurately may seem a daunting challenge, it is really quite easy, as long as we are talking about wide angle to slight telephoto camera lenses. 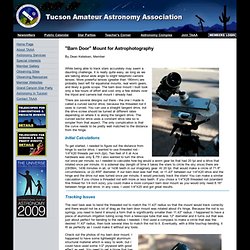 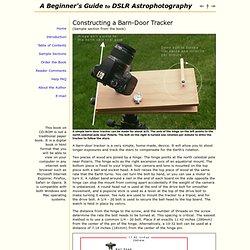 It will allow you to shoot longer exposures and track the stars to compensate for the Earth's rotation. Two pieces of wood are joined by a hinge. The hinge points at the north celestial pole near Polaris. The hinge acts as the right ascension axis of an equatorial mount. Astronomy Boy: Barn Door Tracker. Build a Barn Door Tracker How was the 100 Hz drive frequency determined? 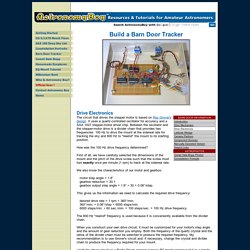 First of all, we have carefully selected the dimensions of the mount and the pitch of the drive screw such that the screw must turn exactly once per minute (1 rpm) to track at the sidereal rate. We also know the characteristics of our motor and gearbox: motor step angle = 1.8° gearbox reduction = 30:1 gearbox output step angle = 1.8° ÷ 30 = 0.06°/step. CN FORUMS ARCHIVE Telescope Reviews: Simple Home-made Equatorial Tracking Platform. THE HINGED ASTROPHOTOGRAPHIC TRACKERBuilding a Simple Mount to Track the Sky In order to capture stunning views of the cosmos without trailing or blurry images you must track the sky to prevent the sky’s apparent motion from ruining your images. 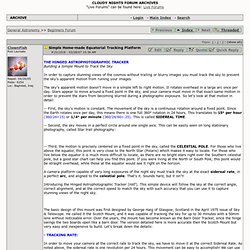 The sky's apparent motion doesn’t move in a simple left to right motion. It rotates overhead in a large arc once per day. Stars appear to move around a fixed point in the sky, and your camera must move in that exact same motion in order to prevent the stars from becoming blurred during a photographic exposure. So let’s look at that motion in detail: -- First, the sky's motion is constant. -- Second, the sky moves in a perfect circle around one single axis.