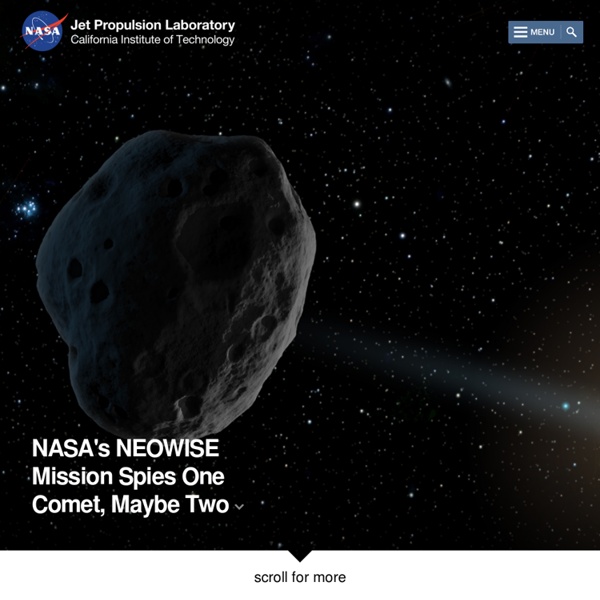 Black hole glimpsed playing cosmic billiards - BBC News Astronomers have witnessed two big blobs of plasma, shot into space by a black hole, cannoning into each other in a dramatic cosmic billiard-shot. The supermassive black hole sits at the heart of the sixth brightest galaxy in our sky, blasting out a jet of plasma at 98% of the speed of light. A fast-moving knot within that jet bore down on another, in a dazzling impact. It was captured in a series of images snapped by the Hubble Space Telescope, spanning 20 years.

Map of Rhea - November 2009 Annotated imageClick on the image for larger version This global digital map of Saturn's moon Rhea was created using data obtained by NASA's Cassini and Voyager spacecraft. The map is an equidistant projection and has a scale of 417 meters (1,400 feet) per pixel in the full size version. The mean radius of Rhea used for projection of this map is 764.1 kilometers (474.8 miles). This map is an update to the version released in February 2010 (see PIA12561).

The Beginning of the Universe and the Limit of Knowledge “Despite its name, the big bang theory is not really a theory of a bang at all. It is really only a theory of the aftermath of a bang.” -Alan Guth So you finally understand it. The Big Bang tells us that the Universe was hotter, denser, and expanding at a faster rate in the past. Image credit: original source unknown.

Deep Impact NASA's Deep Impact probe hits Comet Tempel 1 (NASA) Deep Impact is the name of a NASA space mission whose primary objective was to study Comet Tempel 1 (a.k.a. 9P/Tempel). It was launched on 12 January, 2005, and the smart impactor crashed into the comet on 4 July, 2005. Oh, and yes, Deep Impact is also the name of a movie … but the two have no connection (the science team came up with their name independently of the Hollywood studio), other than that they both concern a comet! Comets had been the focus of several space probes before Deep Impact, perhaps the most famous of which is the ESA’s Giotto flyby of Comet Halley.

Wow! signal The Wow! signal was a strong narrowband radio signal detected by Jerry R. Ehman on August 15, 1977, while he was working on a SETI project at the Big Ear radio telescope of Ohio State University, then located at Ohio Wesleyan University's Perkins Observatory in Delaware, Ohio.[1] The signal bore the expected hallmarks of non-terrestrial and non-Solar System origin[citation needed]. It lasted for the full 72-second window that Big Ear was able to observe it, but has not been detected again. The signal has been the subject of significant media attention.

Bathymetry Bathymetry is a digital image of the undersea land surface and water depth. Bathymetry is the underwater equivalent of land topography. In the maps provided here, shading indicates changes in slope or depth. Much of the data on ocean bathymetry come from "soundings." To collect a sounding, scientists use sonar devices to emit a sound wave that passes into the water. By measuring how long it takes the sound wave to bounce off the ocean floor and return to the sonar, scientists can estimate the depth of the water. Time Machines and Event Horizons » Undivided Looking I've written a pop-article about Time Machines and Event Horizons, which has appeared on the Scientific American blog Critical Opalescence. George Musser, my host, is an editor at Scientific American, and kindly gave me this opportunity to talk about some of my ideas in my article, The Generalized Second Law implies a Quantum Singularity Theorem. If you have any questions about the physics in the article, please feel free to leave comments on this post here.

What's in the heart of a comet? What's in the heart of a comet? A comet's nucleus, or heart, is the solid chunk of something in the center of its fuzzy coma. As it approaches the Sun, some of its surface boils off and creates a long tail. This mesmerizing video shows how incredibly vast space really is Light travels at about 186,000 miles per second. That's an incomprehensibly fast speed — faster than any other object in the universe. But the video above shows how huge just our corner of the galaxy is, even for a photon of light traveling at that remarkable speed. The film, by artist Alphonse Swinehart, gives you the view you'd see if you were a particle of light traveling from the sun across the solar system — even though it's 45 minutes long, you still don't even reach Saturn. This video is a striking reminder that even though we grow up looking at diagrams of the solar system with the planets neatly packed together, it's actually almost entirely made up of empty space.

February, Blue Marble Next Generation w/ Topography Blue Marble: Next Generation offers greater spatial detail of the surface and spans a longer data collection period than the original. The original Blue Marble was a composite of four months of MODIS observations with a spatial resolution (level of detail) of 1 square kilometer per pixel. Blue Marble: Next Generation offers a years worth of monthly composites at a spatial resolution of 500 meters. These monthly images reveal seasonal changes to the land surface: the green-up and dying-back of vegetation in temperate regions such as North America and Europe, dry and wet seasons in the tropics, and advancing and retreating Northern Hemisphere snow cover.

125 Great Science Videos: From Astronomy to Physics & Psychology Astronomy & Space Travel A Brief, Wondrous Tour of Earth (From Outer Space) - Video - Recorded from August to October, 2011 at the International Space Station, this HD footage offers a brilliant tour of our planet and stunning views of the aurora borealis.A Universe from Nothing - Video – In 53 minutes, theoretical physicist Lawrence Krauss answers some big enchilada questions, including how the universe came from nothing.A Year of the Moon in 2.5 Minutes – Video – The Lunar Reconnaissance Orbiter has been orbiting the moon for over a year. The footage gets compressed into 2 slick minutes.A Day on Earth (as Seen From Space) – Video – Astronaut Don Pettit trained his camera on planet Earth, took a photo once every 15 seconds, and then created a brilliant time-lapse film.Atlantis’s Final Landing at Kennedy Space Center - Video - After more than 30 years, the space shuttle era comes to a close. Video runs 30 minutes. Physics

Space Probes A space probe is an unpiloted, unmanned device sent to explore space and gather scientific information. A space probe is launched from Earth with a set of scientific instruments and tools used to study the atmosphere and composition of space and other planets, moons, or celestial bodies. A probe may operate far out in space, or it may orbit or land on a planet or a moon. It may make a one-way journey, or it may bring samples and data back to Earth. Most probes transmit data from space by radio. Inflatable, 20km tall 'space elevator' could replace rockets A Canada-based space company has patented an inflatable "space elevator" designed to propel astronauts up into the stratosphere before they blast off into space. If the maverick "ThothX Tower" were ever actually built, it would soar 20km (12.4 miles) into the sky, and would reduce the cost of space launches by 30 percent in fuel costs alone, according to estimations. It's even hoped that the lift could replace some kinds of satellites. Thoth Technology's Brendan Quine, who invented the prototype, explained: "Astronauts would ascend to 12 miles by electrical elevator. From the top of the tower, space planes will launch in a single stage to orbit, returning to the top of the tower for refuelling and reflight."

Crafting the Blue Marble : Elegant Figures : Blogs One of the best surprises of my life was turning on my brand-new iPhone—before it had even been activated—glancing down at the screen, and seeing an image I had made. Apple chose the NASA Blue Marble for the default welcome screen and wallpaper, and I had no idea beforehand. Here’s how I did it.