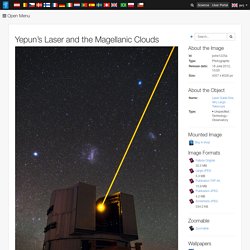 To counteract this, astronomers use a technique called adaptive optics, in which computer-controlled deformable mirrors are adjusted hundreds of times per second to correct for the distortion of the atmosphere. This spectacular image shows Yepun [1], the fourth 8.2-metre Unit Telescope of ESO’s Very Large Telescope (VLT) facility, launching a powerful yellow laser beam into the sky.

The beam creates a glowing spot — an artificial star — in the Earth’s atmosphere by exciting a layer of sodium atoms at an altitude of 90 km. This Laser Guide Star (LGS) is part of the VLT’s adaptive optics system. The light coming back from the artificial star is used as a reference to control the deformable mirrors and remove the effects of atmospheric distortions, producing astronomical images almost as sharp as if the telescope were in space. Notes Links. The Lyrids meteor shower. Usually active between April 16 and April 25 every year. 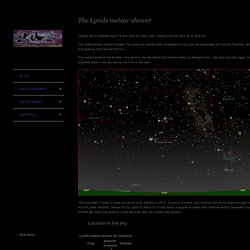 Peaking around April 22 or April 23. The oldest known meteor shower, the Lyrids are named after constellation Lyra and are associated with comet Thatcher, which takes about 415 years to orbit around the Sun. Japan scientists test tether to clear up space junk. Jan 16, Astronomy & Space/Space Exploration This artist's impression released September 1, 2011 by the European Space Agency shows the debris field in low-Earth orbit based on current data, not items in their actual size or density Japanese space scientists are set to trial a tether they hope will help pull junk out of orbit around Earth, clearing up tonnes of planetary clutter, they said Thursday. 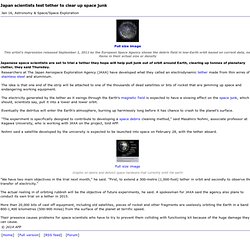 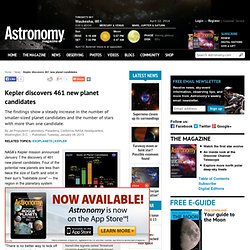 Four of the potential new planets are less than twice the size of Earth and orbit in their sun's "habitable zone" — the region in the planetary system where liquid water might exist on the surface of a planet. Based on observations conducted from May 2009 to March 2011, the findings show a steady increase in the number of smaller-sized planet candidates and the number of stars with more than one candidate. "There is no better way to kick off the start of the Kepler extended mission than to discover more possible outposts on the frontier of potentially life-bearing worlds," said Christopher Burke of the SETI Institute in Mountain View, California.

Since the last Kepler catalog was released in February 2012, the number of candidates discovered in the Kepler data has increased by 20 percent and now totals 2,740 potential planets orbiting 2,036 stars. 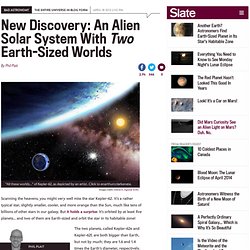 Aguilar (CfA) Scanning the heavens, you might very well miss the star Kepler-62. It’s a rather typical star, slightly smaller, cooler, and more orange than the Sun, much like tens of billions of other stars in our galaxy. But it holds a surprise: It’s orbited by at least five planets… and two of them are Earth-sized and orbit the star in its habitable zone! The two planets, called Kepler-62e and Kepler-62f, are both bigger than Earth, but not by much; they are 1.6 and 1.4 times the Earth’s diameter, respectively.

Given the temperature and size of the parent star, this means that both planets are inside the zone around the star where water on the surface could be a liquid. Or it might not. Also, the best computer models we have, based on what we know about how planets form and change over time, indicate that these planets could very well have water on them (it is, after all, incredibly common both in our solar system and in the Universe at large). Hubble Space Telescope Spies Comet ISON. The Hubble Space Telescope's photo of Comet ISON. 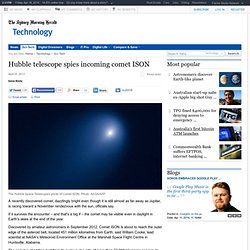 Photo: NASA/AFP A recently discovered comet, dazzlingly bright even though it is still almost as far away as Jupiter, is racing toward a November rendezvous with the sun, officials say.

For how I did these tests I refer to the explanation on this page. The measured exposures of the SPC900NC at different exposure settings, framerates and 640x480 resolution. 5. To prepare for the long exposure mod several measurements must be done to know which signals have to be controlled. Because of the two board design with the processing and control components on different boards, there were high hopes that the long exposure signals could be connected to the large black connector, so that the lifting of pins and cutting of traces could be avoided. 20120119_183400_anim.tim-den.