Astrolabe report (inventory number 35146) There are two different styles of script on this astrolabe. 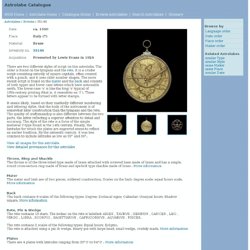 The older is found on the tympans and the rete. It is a cruder script consisting entirely of square capitals, often created with a punch, and it uses older number shapes. The more recent script is found on the mater and the back and consists of both upper and lower case letters which have noticeable serifs. The lower-case 's' is like the long 's' typical of 16th-century printing (that is, it resembles an ‘f’). These letters appear to be formed with letter stamps. It seems likely, based on their markedly different numbering and lettering styles, that the body of the instrument is of somewhat later construction than the tympans and the rete. View all images for this astrolabe View detailed provenance for this astrolabe Throne, Ring and Shackle. 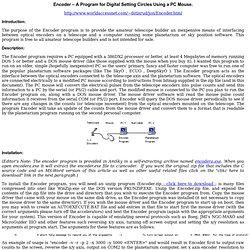 Introduction: The purpose of the Encoder program is to provide the amateur telescope builder an inexpensive means of interfacing between optical encoders on a telescope and a computer running some planetarium or sky position software. This program is free to all amateur telescope builders and is not intended for sale. Description: The Encoder program requires a PC equipped with a 386DX2 processor or better, at least 4 Megabytes of memory running DOS 5 or better and a DOS mouse driver (like those supplied with the mouse when you buy it).

Installation: (Editor's Note: The encoder program is provided in AmSky in a self-extracting archive named encodera.exe. To install the Encoder program, you will need an unzip program (Encoder.zip - click here to download - is many files compressed into one) like WinZip.exe or the DOS version PKUNZIP.EXE. -h A short help message to remind you of the arguments. Setup: Making a Sturdy Wood Tripod - How To. Making a Sturdy Wood tripod out of a (flimsy / cheap / shaky) aluminium tripod. 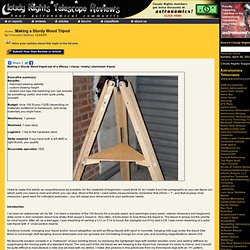 I tried to make this article as comprehensive as possible, for the newbiest of beginners I could think of, so I made it out into paragraphs so you can figure out which parts you need to read and which you can skip. Most of the time I used metric measurements; remember that 25mm ~ 1”, and that anyway most measures I gave were for indicative purposes – you will adapt your dimensions to your particular needs.

Introduction. International Collaboration in Meteor Science. SAAF:S. The Andromeda Project. Arduino Bluetooth Digital Setting Circles for Telescope. I decided to build an Arduino digital setting circle for my mount because it's really hard to buy Tangent Instruments boxes cheaply, and the Argo Navis (the Lexus of telescope digital setting circles) is quite expensive. 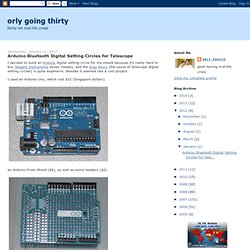 Besides it seemed like a cool project. I used an Arduino Uno, which cost $32 (Singapore dollars) Gary's Motorized Big Binocular Chair - by Gary Honis - Detailed Construction Procedure - Page 1 of 7. Another DIY Parallelogram Binocular Mount. Another DIY Parallelogram Binocular Mount Submitted: Wednesday, 28th March 2007 by Dennis Simmons Introduction At the Queensland Astrofest in 2003 I stood mesmerised by the sight of a fellow astronomer, gliding effortlessly around the cosmos on his commercial, motorised, binocular chair, replete with GoTo capability. 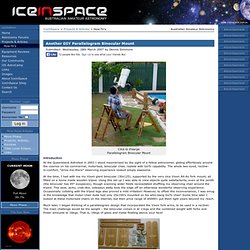 The whole two-eyed, recline-in-comfort, “drive-me-there” observing experience looked simply awesome. At the time, I had with me my Vixen giant binocular (30x125), supported by the very nice Vixen Alt-Az fork mount, all fitted on a home made wooden tripod. Much later, I began thinking of a parallelogram design that incorporated the Vixen fork arms, to be used in a recliner. I started the design at the fork mount support end, working backwards to select components and materials that would support this substantial cantilevered weight. My Comet Couch! - Article. My Comet Couch! 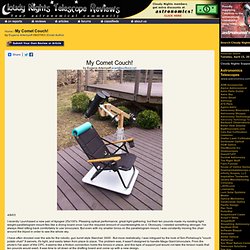 By Eugene Artemyeff ecart@surfbest.net I recently I purchased a new pair of Apogee 25x100's. Pleasing optical performance, great light gathering, but their ten pounds made my existing light weight parallelogram mount flex like a diving board once I put the required amount of counterweights on it. Obviously, I needed something stronger. Lists and Plots: Comets. Space Situational Awareness, services provided by PROBA2. PolHors. Toward the end of the fourteenth century there lived in England a man named Geoffrey Chaucer. He was a customs officer of the king and, because of his position, he was able to travel in England and Europe. He met people who owned books (that was not a very common thing then!) And he read as many books as he could get his hands on.

He may have read, or at least skimmed thru, a great number of the books that were then in existence. In the Middle Ages very few people could read. Now when Geoffrey Chaucer decided to write his own books he didn't write them in Latin. Geoffrey Chaucer celebrated the music of his native tongue. In this "book" I've tried to tame one lion for you - the one that guards the distance between Chaucer's fourteenth century Middle English language and our twenty-first century American English language. Actually, the Treatise on the Astrolabe, also called Bread and Milk for Children, was written for one child.