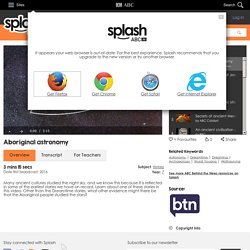 But most people in the know, reckon that Stonehenge was actually one massive star map. While there are still some arguments about its purpose one thing everyone agrees on is its age. Stonehenge is old like 7,000 years old. The world's oldest observatory? How Aboriginal astronomy provides clues to ancient life. Updated Media player: "Space" to play, "M" to mute, "left" and "right" to seek. 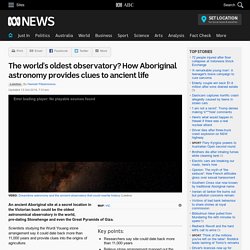 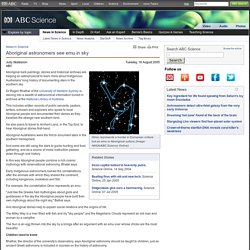 Dr Ragbir Bhathal of the University of Western Sydney is delving into a wealth of astronomical information buried in archives at the National Library of Australia. This includes written records of public servants, pastors, writers, scholars and explorers who spoke to local Aboriginal people and documented their stories as they travelled the strange new southern land. He also plans to travel to Arnhem Land, in the Top End, to hear Aboriginal stories first-hand.

Virtual Tours » Beginner's Guide to the Night Sky (ABC Science) The Southern Cross – or Crux to astronomers – is the best known constellation in the southern hemisphere, and the only one on our flag! 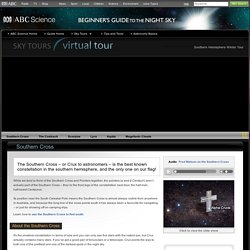 While we tend to think of the Southern Cross and Pointers together, the pointers (α and β Centauri) aren’t actually part of the Southern Cross – they’re the front legs of the constellation next door, the half-man, half-beast Centaurus. Its position near the South Celestial Pole means the Southern Cross is almost always visible from anywhere in Australia, and because the long line of the cross points south it has always been a favourite for navigating – or just for showing off on camping trips. Learn how to use the Southern Cross to find south. How Aboriginal Australians Saw the Stars - Vice. The Emu. 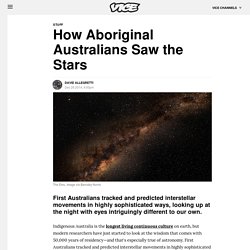 Image via Barnaby Norris Indigenous Australia is the longest living continuous culture on earth, but modern researchers have just started to look at the wisdom that comes with 50,000 years of residency—and that's especially true of astronomy. First Australians tracked and predicted interstellar movements in highly sophisticated ways, looking up at the night with eyes intriguingly different to our own. Stories in the sky: Indigenous Astronomy. The stars hold great significance for Australia’s indigenous people. 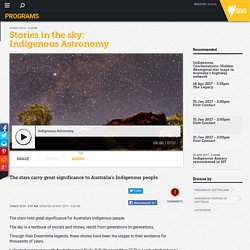 The sky is a textbook of morals and stories, retold from generations to generations. Through their Dreamtime legends, these stories have been the stages to their existence for thousands of years. Let’s start our journey with Australian poet Stella P. Bell’s poem Man Of This Land, which takes us into Australia’s starlit outback. A Silhouette, stark against a red evening sky. Stories from the sky: astronomy in Indigenous knowledge. Indigenous Australian practices, developed and honed over thousands of years, weave science with storytelling. 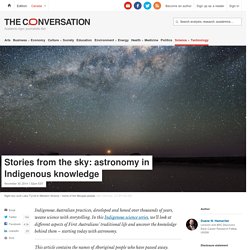 In this Indigenous science series, we’ll look at different aspects of First Australians’ traditional life and uncover the knowledge behind them – starting today with astronomy. This article contains the names of Aboriginal people who have passed away. Indigenous Australians have been developing complex knowledge systems for tens of thousands of years. These knowledge systems - which seek to understand, explain, and predict nature - are passed to successive generations through oral tradition. As Ngarinyin elder David Bungal Mowaljarlai explains: “Everything under creation […] is represented in the ground and in the sky.” Indigenous Astronomy: The Australians. At European contact there was no single, homogeneous Aboriginal society. 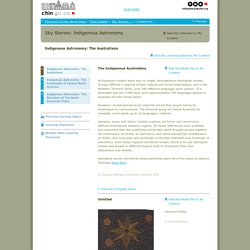 Groups differed in aspects of their cultural and social organisation, and in the Northern Territory alone, over 100 different languages were spoken. It is estimated that pre-1788 there were approximately 700 languages spoken in Australia and the Torres Strait. Existence of widespread social networks meant that people had to be multilingual to communicate. The Arrernte group of Central Australia for example, could speak up to 10 languages / dialects. STAR STORIES OF THE DREAMING - TRAILER HD. Faculty of Arts, Monash University. New Research Hamacher, D.W., 2017. 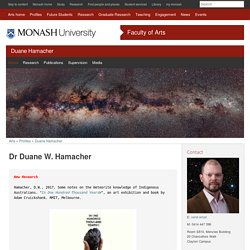 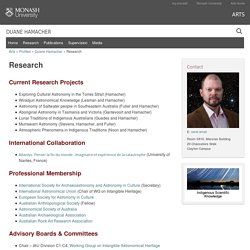 Indigenous Scientific Knowledge (use the 4 links to the four broad topics) Astronomy & Sky | Environment & Landscape | Ecology & Medicine | Mathematics & Technology The rich knowledge systems of Indigenous Australians contain a scientific component used for subsistence survival and social economy. Complex traditions enabled Aboriginal and Torres Strait Islander cultures to hand this knowledge down over tens of thousands of years. Lateline - 12/10/2016: Dreamtime astronomy and the ancient observatory that could rewrite history. Australian Broadcasting Corporation Broadcast: 12/10/2016 Reporter: Hamish Fitzsimmons. The world's oldest observatory? How Aboriginal astronomy provides clues to ancient life. Aboriginal Astronomy: 25/10/2016, Behind the News. Scientists think they may have found the world's oldest astronomical map right here in Australia. The sacred Aboriginal site is believed to have been made to map the position of the sun, moon and stars in the sky.

And studies suggest it might be old enough to predate some much more famous examples from overseas. Aboriginal and scientific views of Kandimalal, Wolfe Creek Crater. Wolfe Creek Crater by John Goldsmith The sight of a dramatic meteor appearing in the night sky is a source of fascination and wonder to people and cultures throughout the world.

Many Australian Aboriginal communities have stories about the night sky, including the Seven Sisters, the Emu in the sky, and meteors (shooting stars). Australian Indigenous Astronomy. Independent Nation through pre-existing and continuing Statehood. When the ancient wisdoms of the universe held by the oldest culture on earth meet modern astrophysics a new concept is born - cultural astronomy. That faint rising tone, physicists say, is the first direct evidence in Western Science of gravitational waves, the ripples in the fabric of space-time that Einstein predicted a century ago. Video and audio below Ghillar Michael Anderson Sovereign Union 12 February 2016 Euahlayi cultural astronomy parallels with latest gravitational waves detection.