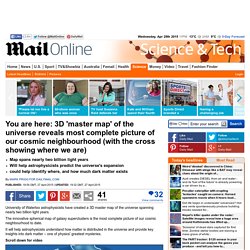 The innovative spherical map of galaxy superclusters is the most complete picture of our cosmic neighbourhood to date. It will help astrophysicists understand how matter is distributed in the universe and provide key insights into dark matter – one of physics' greatest mysteries. Scroll down for video A slice through the 3D Map of the nearby Universe. The map spans nearly two billion light years from side to side. Regions with many galaxies are shown in white or red, whereas regions with fewer galaxies are dark blue. How many stars are there in the universe? - Sky & Telescope. How far is the closest star? Hubble image of Proxima Centauri, the closest star to the Sun.NASA The Sun is the closest star to Earth, about 93 million miles away. 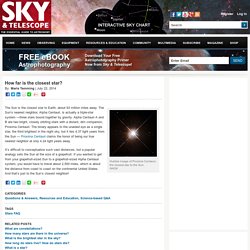 The Sun’s nearest neighbor, Alpha Centauri, is actually a triple-star system —three stars bound together by gravity. Alpha Centauri A and B are two bright, closely orbiting stars with a distant, dim companion, Proxima Centauri. The binary appears to the unaided eye as a single star, the third brightest in the night sky, but it lies 4.37 light years from the Sun — Proxima Centauri claims the honor of being our true nearest neighbor at only 4.24 light years away. It’s difficult to conceptualize such vast distances, but a popular analogy sets the Sun at the size of a grapefruit. Light Year in Miles. By Fraser Cain on September 9, 2009 The Trifid Nebula. 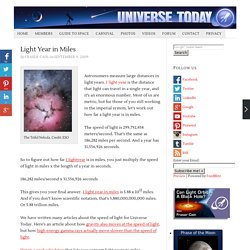 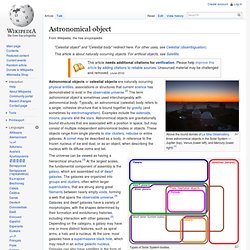 Astronomical objects or celestial objects are naturally occurring physical entities, associations or structures that current science has demonstrated to exist in the observable universe.[2] The term astronomical object is sometimes used interchangeably with astronomical body. Typically, an astronomical (celestial) body refers to a single, cohesive structure that is bound together by gravity (and sometimes by electromagnetism). Light-year.

The light-year is most often used when expressing distances to stars and other distances on a galactic scale, especially in non-specialist and popular science publications. 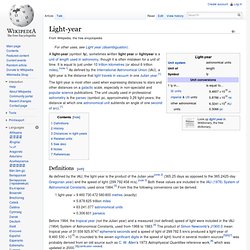 The unit usually used in professional astrometry is the parsec (symbol: pc, approximately 3.26 light-years; the distance at which one astronomical unit subtends an angle of one second of arc).[1] Definitions[edit] As defined by the IAU, the light-year is the product of the Julian year[note 2] (365.25 days as opposed to the 365.2425-day Gregorian year) and the speed of light (299792458 m/s). [note 3] Both these values are included in the IAU (1976) System of Astronomical Constants, used since 1984.[3] From this the following conversions can be derived. Other high-precision values are not derived from a coherent IAU system. History[edit] Luminosity. Image of galaxy NGC 4945 showing the huge luminosity of the central few star clusters, suggesting there are 10 to 100 supergiant stars in each of these, packed into regions just a few parsecs across. 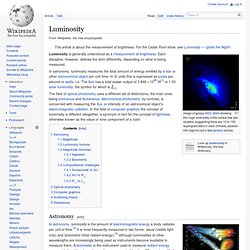 Luminosity is generally understood as a measurement of brightness. Each discipline, however, defines the term differently, depending on what is being measured. In astronomy, luminosity measures the total amount of energy emitted by a star or other astronomical object per unit time. In SI units this is expressed as joules per second or watts. I.e. Astronomy[edit] A star's luminosity can be determined from two stellar characteristics: size and effective temperature.[2] The former is typically represented in terms of solar radii, , while the latter is represented in kelvins, but in most cases neither can be measured directly.

Blue and white supergiants are high luminosity stars somewhat cooler than the most luminous main sequence stars. . . . , meaning their radii are just a few tens of. Astrophysics. Astrophysics (from Greek astron, ἄστρον "star", and physis, φύσις "nature") is the branch of astronomy that deals with the physics of the universe, especially with "the nature of the heavenly bodies, rather than their positions or motions in space. 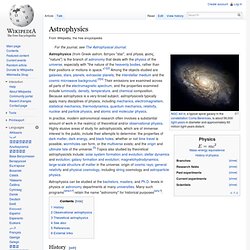 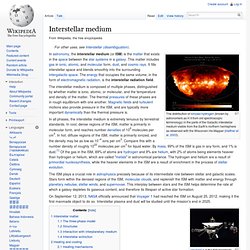 This matter includes gas in ionic, atomic, and molecular form, dust, and cosmic rays. It fills interstellar space and blends smoothly into the surrounding intergalactic space.