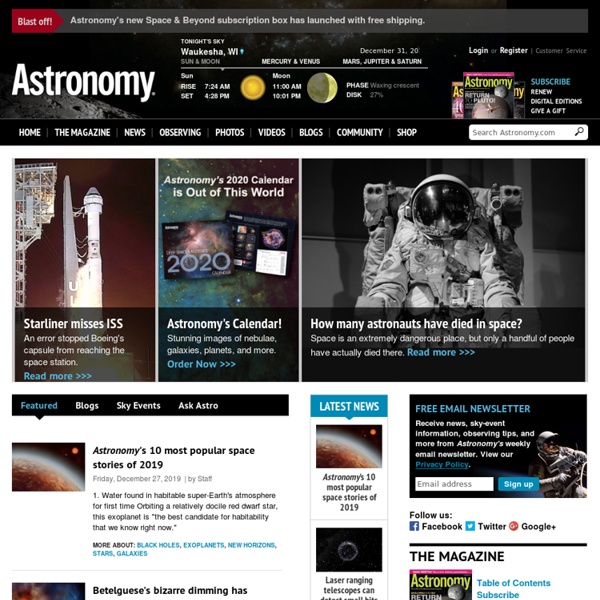 PICTURE OF THE DAYsee all » This image shows part of the North America Nebula (NGC 7000) in the constellation Cygnus the Swan. The orange supergiant Xi Cygni (also known as 62 Cygni) is the central star, together with the “west coast” of NGC 7000. (2.4-inch Takahashi FS-60C refractor at f/6.2, Quantum Scientific Instruments QSI 540wsg CCD camera, Hydrogen-alpha/RGB image with exposures of 60, 10, 10, and 10 minutes, respectively)

Jodrell Bank Centre for Astrophysics Highlights of the Month April - Mars at Opposition. Image NASA. Mars, lying above Spica in Virgo, reaches opposition on April 8th when its magnitude will be -1.5 and its angular diameter 15.1 arc seconds. Quantum leap: Magnetic properties of a single proton directly observed for the first time Most important milestone in the direct measurement of the magnetic moment of the proton and its anti-particle has been achieved / Focusing the matter-antimatter symmetry Researchers at Johannes Gutenberg University Mainz (JGU) and the Helmholtz Institute Mainz (HIM), together with their colleagues from the Max Planck Institute for Nuclear Physics in Heidelberg and the GSI Helmholtz Center for Heavy Ion Research in Darmstadt, have observed spin quantum-jumps with a single trapped proton for the first time. The fact that they have managed to procure this elusive data means that they have overtaken their research competitors at the elite Harvard University and are now the global leaders in this field.

MOLO - Database The Molecular Logic Database is designed to provide teachers and students with easy access to our model-based activities. The activities are derived largely, but not entirely, from projects of the Concord Consortium sponsored by the National Science Foundation (NSF). The models are primarily of interactions of atoms and molecules, or rule-based genetics. The model-based activities are presented in a variety of sizes, styles, and degrees of teacher support, but a subset of Stepping Stones (See Overview of Stepping Stones) has been built to provide entries to larger domains.

Cookies must be enabled. You have cookies turned off To use this website, cookies must be enabled in your browser. To enable cookies, follow the instructions for your browser below. Facebook App: Open links in External Browser Hubble data predicts Milky Way galactic collision When Galaxies Collide! It sounds like an early science fiction novel. However, analysis of Hubble measurements shows that our own Milky Way galaxy is moving toward a head-on collision with our nearest neighbor, the Andromeda galaxy (also known as M31). The collision will start in about four billion years, and over the following three billion years the two spiral galaxies will coalesce into a large elliptical galaxy. Based on this data, NASA has produced a video of the upcoming collision. View all

Chemistry Freeware On this page I post reviews and links to freeware chemistry programs available for download at other sites around the internet. All of the programs are ones that I have used, or currently use. None-the-less, I take no responsiblity for any problems you might experience as a result of installing any of these applications. Unless otherwise noted, the programs are for Windows systems. ACD/ChemSketch 12 Freeware. ACD continues to release updates to the outstanding Chemsketch freeware. Supreme Court Allows Texas To Enforce The Most Draconian Voter ID Law in The U.S.A. By a vote of 6-3 The Supreme Court is allowing Texas’ draconian voter ID law to be enforced for this year’s election. According to Scotusblog, this is the first time since 1982, the Supreme Court allowed enforcement of a restrictive voting law after a Federal Court ruled the law is unconstitutional. In a blistering six page dissent Justice Ginsberg, joined by Justices Kagan and Sotomayor said,

Hubble Wallpaper Videos See the universe come to life via animations, scientific visualizations, expert commentary, and more. Eagle Cam: Turtle Bay Exploration Park: Human. Nature. Unfortunately this was an unsuccessful nesting season, as all three eggs were lost. At this point in time we are unsure what happened. If we learn more, we will be sure to let you know. BALD EAGLE FACTS Although Bald Eagles have been removed from the Endangered Species List, bald eagles are still protected under the Migratory Bird Treaty Act and the Bald and Golden Eagle Protection Act. Are native only to North America!