Top 10 strangest phenomena of the mind 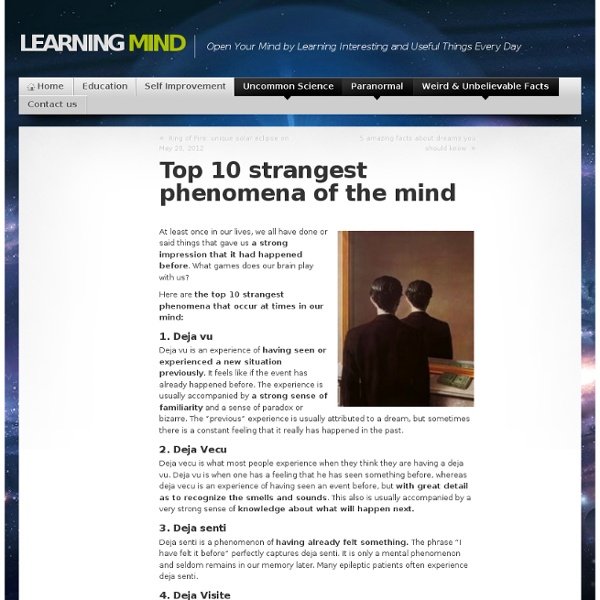 At least once in our lives, we all have done or said things that gave us a strong impression that it had happened before. What games does our brain play with us? Here are the top 10 strangest phenomena that occur at times in our mind: 1. Deja vu Deja vu is an experience of having seen or experienced a new situation previously. 2. Deja vecu is what most people experience when they think they are having a deja vu. 3. Deja senti is a phenomenon of having already felt something. 4. Deja visite is a less common experience and includes an unexplained knowledge of a new place. 5. Jamais Vu describes a familiar situation that we do not recognize. 6. Presque Vu is very similar to the feeling in the “tip of the tongue”. 7. L’esprit de l’escalier is when a smart thought comes to you when it is too late. 8. Capgras Delusion is a phenomenon when a person believes that a close friend or a family member has been replaced with an identically looking one. 9. 10. The following two tabs change content below.

logic and perception - topical index -The Skeptics Dictionary - Skepdic.com Last updated 20-Nov-2015 Recommended Reading Critical Thinking Mini-Lessons 6 Tips To Make Small Talk With Anyone Whether you’re trying to be social at a party, make a friend or get a date, the art of making small talk can be a little difficult if you are not endowed with the gift of gab. Let’s face it—sometimes you just feel instant chemistry between yourself and a stranger, but you don’t have the balls to say something to them. What we’ve got here are 6 tips to make small talk with anyone. Try them out if you see someone who you’d like to get to know better.

The True Hallucinogens Twelve Constellations of the Girdle of Gaia "The Tree of Life bears twelve manner of monthly fruit and the leaves are for the healing of the nations"- Revelation Entheogens, the Conscious Brain and Existential Reality 2012 The purpose of this article is to provide a state of the art research overview of what is currently known about how entheogens, including the classic psychedelics, affect the brain and transform conscious experience through their altered serotonin receptor dynamics, and to explore their implications for understanding the conscious brain and its relationship to existential reality, and their potential utility in our cultural maturation and understanding of the place of sentient life in the universe. Sacrament, Consciousness and Sexual Paradox The Spirits or Mothers of the Plants - Pablo Amaringo

Sensitive Children Who Develop Significant Anxiety In recent months I happened to work with a number of elementary-age children who had developed anxiety symptoms such as resistance to separation, excessive worrying, nightmares, restricted activity, and “meltdowns.” They were all very bright, creative children who engaged in a lot of fantasy play and were described by their parents as very sensitive. While excessive anxiety is not limited to this cohort of personality factors, I do believe that they represent a majority of the children who, in fact, get immobilized by their fears. The good news is that those same characteristics can be used to help them change from feeling powerless and overwhelmed into children who feel capable of solving their problems. In other words, these children learn to be more resilient. When I ask parents in my workshops what qualities or strengths they most want for their children, I usually hear a list that includes happiness, health, kindness, sociability, and achievement.

8 - Polar Mythology ©2011, montalk.net (Version 0.1 – changelog provided at end of article) The Meaning of Myth How Quantum Suicide Works& ­­A man sits down before a gun, which is pointed at his head. This is no ordinary gun; i­t's rigged to a machine that measures the spin of a quantum particle. Each time the trigger is pulled, the spin of the quantum particle -- or quark -- is measured. Depending on the measurement, the gun will either fire, or it won't. If the quantum particle is measured as spinning in a clockwise motion, the gun will fire. If the quark is spinning counterclockwise, the gun won't go off. Psychological ("personality") Types Psychological ("personality") Types According to Jung's theory of Psychological Types we are all different in fundamental ways. One's ability to process different information is limited by their particular type. These types are sixteen. People can be either Extroverts or Introverts, depending on the direction of their activity

The Power of Coincidence Targ's research was impressive enough that the National Institutes of Health gave her $1.5 million to carry out two more distant-prayer studies, one on AIDS and another on glioblastoma multiforme, an aggressive and almost inevitably fatal brain tumor. In Europe and the U.S. there are approximately two to three new cases per 100,000 people annually. "It is a particularly gnarly disease from which people rarely recover," says her father, "and that's why she wanted to study it." Two months later, Targ, who was 40, began fertility treatments: she and her fiance, physicist Mark Comings, wanted a family. That spring, however, she began finding it difficult to pronounce words with the letter "b," and one morning the left side of her face sagged. A high-resolution MRI revealed that she was suffering from a rapidly growing grade 4 glioblastoma multiforme brain tumor.

Out of the ordinary Beauty Tips that work Use toothpaste on yellow nails. This usually happens when you let nail polish stay on your nails for very long and when you’ve used cheap nail polish. Whiten them all up by rubbing toothpaste to remove the stains. You can also add a few drops of lemon for extra whitening, it’s a natural bleaching agent. The Benjamin Franklin Effect The Misconception: You do nice things for the people you like and bad things to the people you hate. The Truth: You grow to like people for whom you do nice things and hate people you harm. Benjamin Franklin knew how to deal with haters. Born in 1706 as the eighth of 17 children to a Massachusetts soap and candlestick maker, the chances Benjamin would go on to become a gentleman, scholar, scientist, statesman, musician, author, publisher and all-around general bad-ass were astronomically low, yet he did just that and more because he was a master of the game of personal politics. Like many people full of drive and intelligence born into a low station, Franklin developed strong people skills and social powers.