Creative Writing Prompts: Secrets and Lies for Your Characters 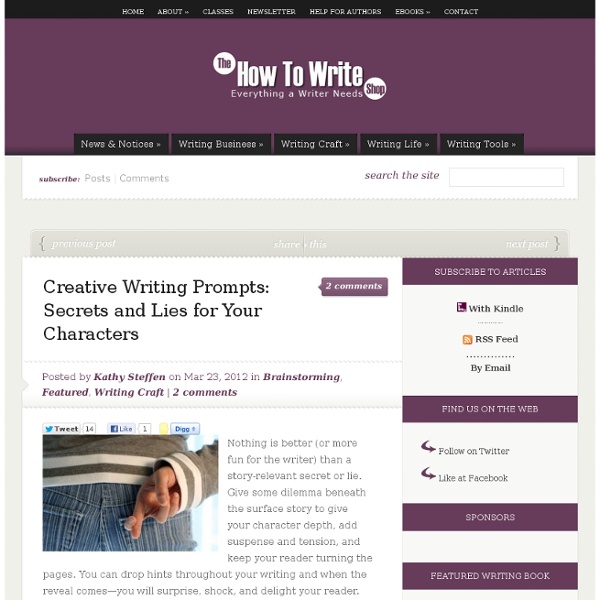 Nothing is better (or more fun for the writer) than a story-relevant secret or lie. Give some dilemma beneath the surface story to give your character depth, add suspense and tension, and keep your reader turning the pages. You can drop hints throughout your writing and when the reveal comes—you will surprise, shock, and delight your reader. Creating a character with a strong internal conflict, secret, or burden makes for one compelling read! (To see more on writing a compelling protagonist, check out The Compelling Protagonist Part 1 and Compelling Protagonist Part 2.) It’s vital to have conflict in every scene, and when the action is quiet in your book, internal conflict will keep a reader turning the pages. Below are writing prompts to help you find some ideas for internal secrets, lies (and therefore conflict) for your characters. Write about a broken promise. Write about a secret. Write about a lie that protects. Write about a lie that is told to hurt.

Tips To Write Better Royalty, Nobility, & Other Upper-Class & Important Characters You may have seen this one before: a young woman gets roped into attending an upper-class party of some kind. She hates the dress. She can’t stand the chit-chat that goes on between the guests. And she looks upon her father, Lord Westmoore, with disdain and contempt for attempting to flatter and get on the good side of a more influential and more powerful lord. Our heroine hates the whole noble scene. What’s more, we’re supposed to agree with her and all of her opinions and choices up to this point. Problem is, scenarios like these are typically built up on a lot of stereotypes and misunderstandings of just what being nobility or upper class entails. There’s often a lot of responsibility that goes with the status and title. One problem that plagues a lot of fiction where characters of status and title are concerned is that their actual responsibilities get overlooked. Maybe Lord Westmoore isn’t just being some kind of sad little suckup just to climb the social ladder.

Character Chart for Fiction Writers - EpiGuide.com If you're a fiction writer -- whether you're working on a novel, short story, screenplay, television series, play, web series, webserial, or blog-based fiction -- your characters should come alive for your reader or audience. The highly detailed chart below will help writers develop fictional characters who are believable, captivating, and unique. Print this page to complete the form for each main character you create. IMPORTANT: Note that all fields are optional and should be used simply as a guide; character charts should inspire you to think about your character in new ways, rather than constrain your writing. If this character chart is helpful, please let us know! Looking for more character questionnaires / charts? The Worst Thing That Can Happen to Your Character This week’s video examines the advice to “think of the worst thing that can happen to your character, then make it worse.” Writers are always being told to think of the worst thing that could happen to their characters—and then to make it worse. Being something of a literalist, the first time I heard that, my original thought was something like, The worst thing? You mean like kill him? With maybe a few interpretative exceptions, death is pretty much the worst thing that can happen to any of us. So what did they have in mind? The point of this exercise is not only to up the stakes and create conflict, but more importantly to generate character growth and advance his personal arc in the story. For example, if your character is about to propose marriage to the woman he loves, his worst thing might be her discovery of a secret in his past. Tell me your opinion: What is the worst thing that could happen to your character at this point in your story?

Assassins: Tips & Guidelines To Write & Play Them More Believably When people imagine assassins, they often envision sleek, seductive figures armed with pretty little stabby blades or some other kind of special super weapon. Sensuous scenes are called to mind - eg, a black-clad assassin creeping into the room of a sleeping prince to stab him in his sleep. But the reality is, these fantastic images are just that - fantasy. Real and realistic assassinations and assassins are typically anything but glamorous and sexy, and in general, they wouldn’t work very much at all like people tend to imagine. Clothes: Any decent assassin is going to want to blend in. This doesn’t mean wearing sleek black catsuits, but rather clothes that someone with legitimate business in the area might be wearing. Unique/rare weapons: Unique/rare weapons are generally easier to trace and more difficult to replace, service, or find ammo for. Seduction as a tactic: This is plausible in a world where DNA testing does not yet exist. Children-as-assassins make little sense, either.

How to Write Better: 7 Instant Fixes Does your writing stand out? Do you worry whether your writing is good enough? I can see you nodding your head. You are not alone. Every writer has doubts about his or her writing. The good thing is that writing is a journey. On this journey, you can either travel the long road – or use shortcuts. Using shortcuts means learning to spot and fix mistakes in order to write better. Here are seven instant fixes that will improve your writing. But … what is good writing? Inexperienced writers think that ‘good’ writing is elaborate. No, good writing is simple. 1: The art of natural Check out an example of elaborate writing below (I’ve sourced examples of writing from free Kindle books chosen at random). This is from a story about a young girl who is at home with her young brother when a thunderstorm strikes. An ebony abyss claimed the den. I take this to mean, “The room went dark.” Maybe the author consulted a Thesaurus to create a sentence with special words. Your words should sound natural. Careful!

Traits of Human Consciousness Several Steps Further: Aside from the listing above, traits of human consciousness can be viewed from a number of other perspectives. Here are several: Traits Organized from Psychological (Inner-oriented) to Social (Outer-oriented) Human personality/character traits can be divided by those that are inner/psychological; and those that are outer-oriented/social. Traits Expressing in the Vertical Scale of Human Consciousness (Physical, Vital, Mental) The individual human expresses exits at three fundamental planes or levels of being -- mental, vital, and physical. ARTICLE: Positive and Negative Human Traits (from a spiritual perspective) New Fundamental Traits/Capacities that Enable Higher Achievement and Personal Growth From our research, we have determined that there are certain fundamental human traits and capacities that enable an individual to accomplish at a higher level, as well as rise in consciousness and fulfillment in life. Personal and Society's Values

Characters With Conflict & Backstory Seven Steps To Creating Characters That Write Themselves Creating characters that are believable takes time and discipline. Creating dynamically real individuals and not imposing your own thoughts and impressions upon them is not easy to do, and is often the difference between a novel or screenplay that sits in a closet and one that finds its way around town and into the hands of audiences. Spending your time building your characters before they enter the world of your story makes the process of writing an easier and more enjoyable ride, and creates a finished product that agents, publishers, producers and readers can truly be excited by. You must first agree to operate from the understanding that the three-dimensionality of your characters is not created magically. The complexity that you desire comes through: 1. The first key to deepening your work is finding the major motivators in the lives of your characters that drive their actions. 2. 3. 4. 5. Emotions are extreme. 6. 7.

Spies: A Few Things Writers & Roleplayers Should Know About Them Spies are pretty popular characters both in fiction and in roleplays, but there's quite a bit of confusion on what spies are supposed to do and exactly how they might go about doing it. So here's a basic look into that. Spies and assassins are not the same thing. Many people treat spies and assassins as if they're one and the same thing. In fact, spies and assassins perform different functions, even if assassins must occasionally rely on subterfuge to see their goals met. Where assassins are hired to kill people, spies are hired to collect and relay information to someone else. While it might be tempting to justify a spy doubling as an assassin by saying that the spy needs to be able to get rid of of people who get too suspicious or nosy, mysterious disappearances and dead bodies are about as suspicious as it gets, especially if they have connections to highly sensitive things. The techniques and tools are often less exciting and glamorous than Fictionland portrays.

Basic Tips To Write Better & More Despicable Villains Show your villain personally doing something despicable. A villain that does nothing but sit on a throne (or peer down from the top of a giant tower) is hardly a villain at all. It's hard to feel even remotely intimidated by a guy or gal who just sits around giving scary orders all day. A perfect example of this is Galbatorix in the first book of The Inheritance Cycle, whose most villainous acts are ordering the destruction and torture of some terrorists (because yes, that's what the Varden are), taxing the people, and destroying some villages we didn't even care about. Don't make the same mistake. Put some grime on your villains' hands. Have the villain do something awful to something or someone we care about. If we aren't emotionally invested in something or someone the villain harms, we aren't really going to be affected by its death or destruction. Rationally, we know that Darth Vader destroying Alderaan to make Princess Leia talk was utterly despicable. Avoid bargain bin Nazis.