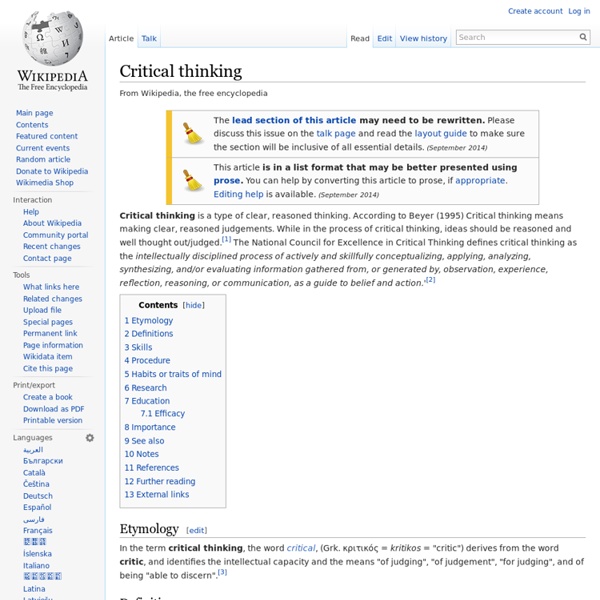 Critical thinking is a type of clear, reasoned thinking. According to Beyer (1995) Critical thinking means making clear, reasoned judgements. While in the process of critical thinking, ideas should be reasoned and well thought out/judged.[1] The National Council for Excellence in Critical Thinking defines critical thinking as the intellectually disciplined process of actively and skillfully conceptualizing, applying, analyzing, synthesizing, and/or evaluating information gathered from, or generated by, observation, experience, reflection, reasoning, or communication, as a guide to belief and action.'[2] Etymology[edit] In the term critical thinking, the word critical, (Grk. κριτικός = kritikos = "critic") derives from the word critic, and identifies the intellectual capacity and the means "of judging", "of judgement", "for judging", and of being "able to discern".[3] Definitions[edit] According to the field of inquiry [weasel words], critical thinking is defined as: Skills[edit] In sum:

Critical Thinking From The Ground Up Critical Thinking From The Ground Up by John Jensen Images of critical thinking in full bloom abound—teams in furious concentration to send rockets to Mars, the ferment of ideas in businesses like Apple and Google, and the patient concentration of a Nobel Prize-winning scientist. Education’s work, however, is with the early seedlings of these fruits that present fewer pictures. If a child needs a 2-degree course correction to find his way to intellectual greatness, making the change early is easiest and cheapest if we can understand how to guide him. My work has enabled me to observe many children with similar school experiences that seldom include a foundation for critical thinking.

Critical and Creative Thinking - Bloom's Taxonomy What are critical thinking and creative thinking? What's Bloom's taxonomy and how is it helpful in project planning? How are the domains of learning reflected in technology-rich projects? Benjamin Bloom (1956) developed a classification of levels of intellectual behavior in learning.

Propaganda Techniques Propaganda designers have been putting messages into television commercials, news programs, magazine ads, and other things we read and see for years. These messages have been carefully designed to influence our opinions, emotions, attitudes and behavior. Their purpose is to persuade us to believe in something or to do something that we would not normally believe or do. These messages have been designed to benefit someone, and that someone may not be you! 10 Powerful Tips to Increase Fan Engagement on Facebook Facebook is the social network preferred by most businesses when planning and implementing their social media marketing strategy. Even though Twitter and YouTube are large social media networks, Facebook provides a marketing ecosystem that is multi-media rich and broad. There are literally tens of thousands of apps that can assist business with marketing on Facebook. Even though it feels like Facebook has been part of our lives forever it must be noted that Facebook “Pages” for Business have only been with us for barely 3 years!

Always be innovating: Preloaded on success, failure and games with purpose - edugameshub I’ve been following the fortunes of games agency Preloaded for several years now, and worked with them on a number of projects. During that time, they’ve grown considerably and had some impressive successes. I wondered: what do they think is behind that success, and what advice might they have for others who want to create educational games? I interviewed their managing director, Paul Canty, to find out his thoughts on this and their new venture showcasing games with purpose. 249 Bloom's Taxonomy Verbs For Critical Thinking Bloom’s Taxonomy’s verbs–also know as power verbs or thinking verbs–are extraordinarily powerful instructional planning tools. In fact, next to the concept of backwards-design and power standards, they are likely the most useful tool a teacher-as-learning-designer has access to. Why?

CREATIVITY, CRITICAL THINKING and CONTENT « LJHS Social Studies Blog I divide each Social Studies unit into content and conceptual mastery, analysis and creative interpretation because public education, has three core objectives: 1. To impart a body of knowledge and academic skills deemed valuable by society. Campaign reaction — Not Ever Campaign reaction Fault versus precautions “Those who rape does not care about this campaign. It's like telling people not to steal or kill. You can ignore the fact that some people do not respect you OR you could be responsible and take precautions. I can say: "It's the thieves fault I was robbed!".

Deeper Learning: Authentic Student Assessment Is it possible to systemically embed deeper learning outcomes for students? Dressed to the nines, Alexis, a senior at an Envision School, stands in front of a panel of adults from his school community -- teachers, counselors, administrators and other school staff -- explaining how his Political Campaign Project analytical paper is not only evidence of his ability to write at a college ready level and demonstrates his knowledge of US Government content standards, it is concrete evidence that he can think critically and communicate effectively. Alexis pulls specific examples from his essay and compares them to the standards addressed in Envision Schools' rubric for Critical Thinking and Communication. The panel questions and probes Alexis thinking through hard evidenced based questions. After conferring as a panel, they certify that Alexis has met the criteria for graduation from his Envision School based on his performance and defense of that work.

Vialogues, a Web 2.0 tool supporting 21st Century learning skills Address: Vialogues is a Web 2.0 tool providing a platform for asynychronous discussions centered around videos. While videos can engage students, the addition of meaningful commentaries increases student learning. This Web 2.0 teaching tool is easy to integrate into the curriculum. Art Lynch's Blog: Listening and Critical Thinking Listening and Critical Thinking a. Adults listen 50% or less b. Teenagers listen 25% or less How to Get Website Traffic From Facebook Fan Pages Facebook is the largest growing social networking site on the world. It has 750,000,000 unique visitors per month (estimated). So it is also the fastest growing site which can give your blog a lot of traffic. In this article I will talk about getting more website traffic from your Facebook page.

16 Flipped Classrooms In Action Right Now Flipped classrooms require educators to reconstruct traditional classrooms by sending lectures home and providing more face-to-face time at school, but elementary- through university-level instructors are finding good reasons to try them out. Frequently traced back to Colorado teachers Aaron Sams and JonathanBergmann, who were quick to experiment with posting videos online in 2008, the flipped classroom concept is small, simple and has shown positive results. The general idea is that students work at their own pace, receiving lectures at home via online video or podcasts and then devoting class time to more in-depth discussion and traditional “homework.” Where: Clear Brook High School, Harris County, Texas At the beginning of the school year, geometry teacher Leticia Allred told her Pre-AP Geometry class at Texas’ Clear Brook High School that their only homework would be watching 15-minute YouTube videos and taking notes.