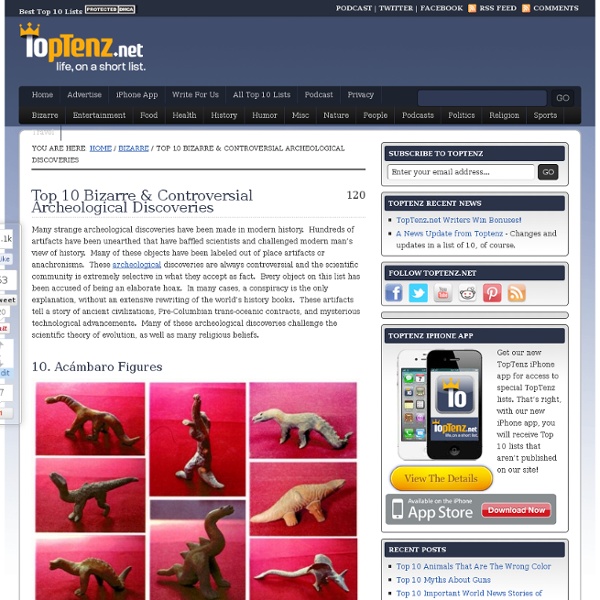 Many strange archeological discoveries have been made in modern history. Hundreds of artifacts have been unearthed that have baffled scientists and challenged modern man’s view of history. Many of these objects have been labeled out of place artifacts or anachronisms. 10. Discovered: 1944 Attempts have been made to date these figures using Thermoluminescence, or TL dating, and the results suggested a date around 2500 BCE. 9. Discovered: 1938 The alleged story of the Dropa Stones is as follows. The disks were labeled the Dropa Stones. Tsum Um Nui claims that an alien spacecraft crashed in the Bayan Har Shan region 12,000 years ago. 8. Discovered: 1880s It was not the first time that gigantic horned skulls have been unearthed in North America. 7. Discovered: 1999 In 1999, a professor at Bashkir State University in Russia named Alexander Chuvyrov made a remarkable archeological discovery. The map also contains numerous inscriptions. 6. Discovered: 1974 5. 4. Discovered: 1929 The Topkap? 3. 2.

Nerd Paradise : How to Write a 20 Page Research Paper in Under a Day Posted on: 10 Cado 7:0 - 5.27.29 So you've procrastinated again. You told yourself you wouldn't do this 2 months ago when your professor assigned you this. But you procrastinated anyway. Pick a Topic The more "legally-oriented" your topic is, the better. Make a list ...of every possible outcome that this issue could cause in...the near future...the far future...of every person that this topic affects....of any instances where this topic has come in the news....what you would do about this topic if you had the chance/power/enough-sugar...any little detail you can think ofThe important thing about this is to think of ABSOLUTELY EVERYTHING, no matter how silly or far-fetched. Reorder everything Put your most obvious argument first. Then put weird off the wall stuff, regardless of importance. Put the strongest argument for your case next. Now list the incidents that will help argue for your point. It's best to keep all this in the form of an outline. Spaces Now print it out. Write Go Back Inside

Ancient Aliens Debunked Chris White hopes to demonstrate to you that Ancient Aliens series are not wrong on just some information, but on every single point where they assert the Ancient Astronaut theory to explain evidence. He also hopes to demonstrate the often deceptive means they use to convey their ideas, which includes them fabricating evidence to substantiate their points. Ancient Aliens Debunked is a 3 hour refutation of the theories proposed on the History Channel series Ancient Aliens. It is essentially a point by point critique of the "ancient astronaut theory" which has been proposed by people like Erich von Däniken and Zecharia Sitchin as well as many others. The film covers topics like ancient building sites: Puma Punku, The Pyramids, Baalbek, Incan sites, And Easter Island. Watch the full documentary now

Download Graphic Images from the Hillis/Bull Lab Return to "Download Files" Page You are welcome to download the following graphic image of the Tree of Life for non-commercial, educational purposes: Tree of Life (~3,000 species, based on rRNA sequences) (pdf, 368 KB) (see Science, 2003, 300:1692-1697) This file can be printed as a wall poster. Tree of Life tattoo, courtesy of Clare D'Alberto, who is working on her Ph.D. in biology at the University of Melbourne. The organisms depicted in this tattoo are (starting at 4 o'clock and going around clockwise): (1) a cyanobacterium (Anabaena); (2) a radiolarian (Acantharea); (3) a dinoflagellate (Ceratium); (4) an angiosperm (Spider Orchid); (5) a couple species of fungi (Penicillium and a yeast); (6) a ctenophore (comb jelly); (7) a mollusc (nudibranch); (8) an echinoderm (brittle star); and (9) a vertebrate (Weedy Sea Dragon). Here is another great Tree of Life tattoo! Cover of Molecular Systmatics, 2nd ed Here is yet another version from Hannah Udelll at the University of Wisconson-Madisson.

Welcome to OpenGameArt.org | OpenGameArt.org 6 Insane Discoveries That Science Can't Explain We like to feel superior to the people who lived centuries ago, what with their shitty mud huts and curing colds by drilling a hole in their skulls. But we have to give them credit: They left behind some artifacts that have left the smartest of modern scientists scratching their heads. For instance, you have the following enigmas that we believe were created for no other purpose than to fuck with future generations. The Voynich Manuscript The Mystery: The Voynich manuscript is an ancient book that has thwarted all attempts at deciphering its contents. It appears to be a real language--just one that nobody has seen before. Translation: "...and when you get her to put the tennis racket in her mouth, have her stand in a fountain for a while. There is not even a consensus on who wrote it, or even when it was written. Why Can't They Solve It? Could you? Don't even try. As you can imagine, proposed solutions have been all over the board, from reasonable to completely clownshit. Our Guess:

Visible Only From Above, Mystifying 'Nazca Lines' Discovered in Mideast | Stone Wheels & Geoglyphs | Middle East Archaeology & Google Earth They stretch from Syria to Saudi Arabia, can be seen from the air but not the ground, and are virtually unknown to the public. They are the Middle East's own version of the Nazca Lines — ancient "geolyphs," or drawings, that span deserts in southern Peru — and now, thanks to new satellite-mapping technologies, and an aerial photography program in Jordan, researchers are discovering more of them than ever before. They number well into the thousands. Referred to by archaeologists as "wheels," these stone structures have a wide variety of designs, with a common one being a circle with spokes radiating inside. "In Jordan alone we've got stone-built structures that are far more numerous than (the) Nazca Lines, far more extensive in the area that they cover, and far older," said David Kennedy, a professor of classics and ancient history at the University of Western Australia. Fascinating structures Indeed, in 1927 RAF Flight Lt. What were they used for?

8 shocking things we learned from Stephen Hawking's book From the idea that our universe is one among many, to the revelation that mathematician Pythagoras didn't actually invent the Pythagorean theorem, here are eight shocking things we learned from reading physicist Stephen Hawking's new book, "The Grand Design," written with fellow physicist Leonard Mlodinow of Caltech. The book, covering major questions about the nature and origin of the universe, was released Sept. 7 by its publisher, Bantam. 1. The past is possibility According to Hawking and Mlodinow, one consequence of the theory of quantum mechanics is that events in the past that were not directly observed did not happen in a definite way. For example, if all we know is that a particle traveled from point A to point B, then it is not true that the particle took a definite path and we just don't know what it is. Yeah, we're still trying to wrap our brains around this. 2. This fun fact: A 1-watt night-light emits a billion billion photons each second. 3. 4. 5. 6. 7. 8.

BioTapestry 30 of the World's Greatest Wedding Cakes Few things are more important on a wedding day (apart from both partners turning up; the ring being secure; and nobody objecting during the ceremony) than the cake. Very few weddings are without such a centrepiece. It's just a shame that so many couples opt for the same traditional, boring designs when there is so much opportunity to impress and surprise the guests. Here are 30 brilliant examples, to be used as inspiration for your own big day. Above: A wedding cake fit for an action hero. Above: An illustration of things to come? Above: There's nothing like brutal honesty wrapped in a Portal nod to begin a marriage. Above: A wedding massacre. Above: A show of vanity so incredible as to be impressive. Above: A wedding cake fit for geeks. Above: The most unappetising wedding cake I've ever wanted. Above: A work of baked art. Above: For Stargate fans only. Above: Good news everyone! Above: A cake for the Lego lovers amongst us. Above: Binary deliciousness. Above: Nothing is safe from Steampunk.

The Mysterious Plain of Jars Often referred to as â€œan Asian version of Stonehengeâ€, the Plain of Jars is one of the most enigmatic sights on Earth. Shrouded in mystery and myth, this ancient place has fascinated archeologists and scientists ever since its discovery. [Photo Credits] Thousands of giant stone jars scattered around the Xieng Khouang plain, in Laos form one of the most bizarre archeological collections in history. Although it has been determined they are over 2000 years old, no one has yet been able to determine who built them and for what purpose. [Photo Credits] More than 400 sites have been discovered around the Plain of Jars, but only three of them have been opened to the public. [Photo Credits] But if you ask the locals, theyâ€™ll tell you of an old race of giants who once lived in these lands. [Photo Credits] Though there arenâ€™t many roads leading to the Plain of Jars, and tourist numbers are still at a minimum, man still managed to exert his destructive influence over this place.

A molecular link between the active compon... [Mol Pharm. 2006 Nov-Dec List of inventors killed by their own inventions Franz Reichelt (d. 1912) attempted to use this contraption as a parachute. Reichelt died after he jumped off the Eiffel Tower wearing his invention, which failed to operate properly as a parachute. This is a list of inventors whose deaths were in some manner caused by or related to a product, process, procedure, or other innovation that they invented or designed. Direct casualties Automotive Fred Duesenberg, killed in high speed road accident in Duesenberg automobile.William Nelson (ca. 1879−1903), a General Electric employee, invented a new way to motorize bicycles. Aviation Industrial Maritime Hunley Submarine Medical Thomas Midgley, Jr. (1889–1944) was an American engineer and chemist who contracted polio at age 51, leaving him severely disabled. Physics Publicity and entertainment Karel Soucek (19 April 1947 – 20 January 1985) was a Canadian professional stuntman who developed a shock-absorbent barrel. Punishment Railways Rocketry Popular myths and related stories See also References E.