25 Things You Need To Know About Writing Mysteries, By Susan Spann. Mystery novels work a lot like any other genre, except that mystery writers murder their imaginary friends. 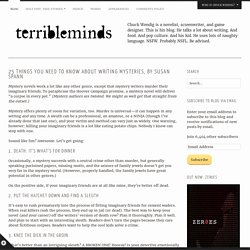 To paraphrase the Hoover campaign promise, a mystery novel will deliver “a corpse in every pot.” (Mystery authors are twisted. We might as well get that straight from the outset.) Mystery offers plenty of room for variation, too. Murder is universal—it can happen in any setting and any time. Sound like fun? Occasionally, a mystery succeeds with a central crime other than murder, but generally speaking purloined papers, missing mutts, and the seizure of family jewels doesn’t get you very far in the mystery world. On the positive side, if your imaginary friends are at all like mine, they’re better off dead. It’s easy to rush prematurely into the process of fitting imaginary friends for cement waders. What’s better than an intriguing sleuth? If not, stop now and take a hammer to your sleuth’s emotional kneecaps.

How To Write A Murder Mystery. I've never written a murder mystery, but I've always wanted to. 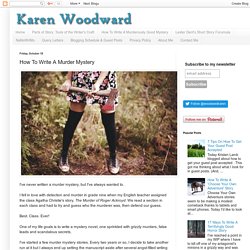 I fell in love with detection and murder in grade nine when my English teacher assigned the class Agatha Christie's story, The Murder of Roger Ackroyd. We read a section in each class and had to try and guess who the murderer was, then defend our guess. Best. Class. Ever! One of my life goals is to write a mystery novel, one sprinkled with grizzly murders, false leads and scandalous secrets. Writing A Murderously Good Mystery: The Importance of the Murder Victim. Today I'm continuing my mini-series on how to write a murderously good mystery by exploring what qualities the murder victim might have. 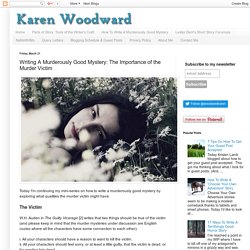 The Victim W.H. Auden in The Guilty Vicarage [2] writes that two things should be true of the victim (and please keep in mind that the murder mysteries under discussion are English cozies where all the characters have some connection to each other): i. All your characters should have a reason to want to kill the victim. ii. The trouble, of course, is that for everyone to want the victim dead it's unlikely he's going to be a shining ray of sunshine.

Survivor Guilt First of all let me mildly disagree with W.H. For example, Agatha Christie's short story, The Adventure of the Christmas Pudding, the victim is singularly despicable in every way and anything we found out about the deceased afterward just confirmed our low opinion of him. A Sympathetic Character Subsequent Victims Links/References. How To Write A Murderously Good Mystery. I said I would finish my post on narrators today but I've decided to put that off until Monday. 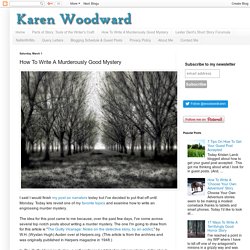 Today lets revisit one of my favorite topics and examine how to write an engrossing murder mystery. The idea for this post came to me because, over the past few days, I've come across several top notch posts about writing a murder mystery. The one I'm going to draw from for this article is "The Guilty Vicarage: Notes on the detective story, by an addict," by W.H. (Wystan Hugh) Auden over at Harpers.org. (This article is from the archives and was originally published in Harpers magazine in 1948.)

In The Guilty Vicarage Auden--a self-confessed addict of murder mysteries--talks about what elements go into creating a great, wonderfully escapist, murder mystery. The Basic Formula of a WhoDunit: Auden writes that the "basic formula is this: a murder occurs; many are suspected; all but one suspect, who is the murderer, are eliminated; the murderer is arrested or dies. " The Importance of Setting In Writing A Murderously Good Mystery. The Five Elements: Milieu, Victim, Murderer, Suspects, Detectives "The detective story has five elements — the milieu, the victim, the murderer, the suspects, the detectives. 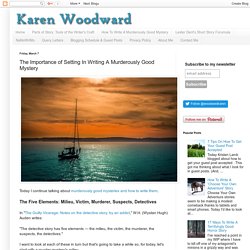 " I want to look at each of these in turn but that's going to take a while so, for today, let's start with a murder mystery's milieu. Milieu a. The Society/Setting must be closed. I think that what W.H. Small suspect pool. How To Write A Murderously Good Mystery. March 1, 2014 In The Guilty Vicarage Auden--a self-confessed addict of murder mysteries--talks about what elements go into creating a great, wonderfully escapist, murder mystery. 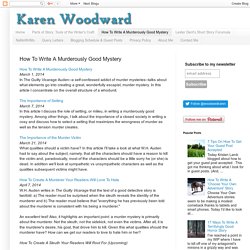 In this article I concentrate on the overall structure of a whodunit. March 7, 2014. Classic 12-Chapter Murder Mystery Formula. (Note: This has been floating around the internet for years, and I don’t know who first wrote it (if anyone does, let me know!) 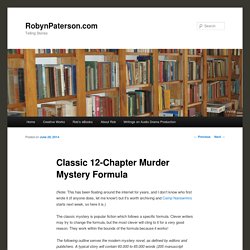 But it’s worth archiving and Camp Nanowrimo starts next week, so here it is.) Plotting the Mystery Novel. The classic mystery is popular fiction which follows a specific formula. 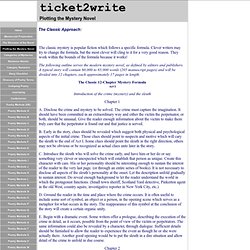 Clever writers may try to change the formula, but the most clever will cling to it for a very good reason. They work within the bounds of the formula because it works! The following outline serves the modern mystery novel, as defined by editors and publishers. A typical story will contain 60,000 to 65,000 words (205 manuscript pages) and will be divided into 12 chapters, each approximately 17 pages in length.