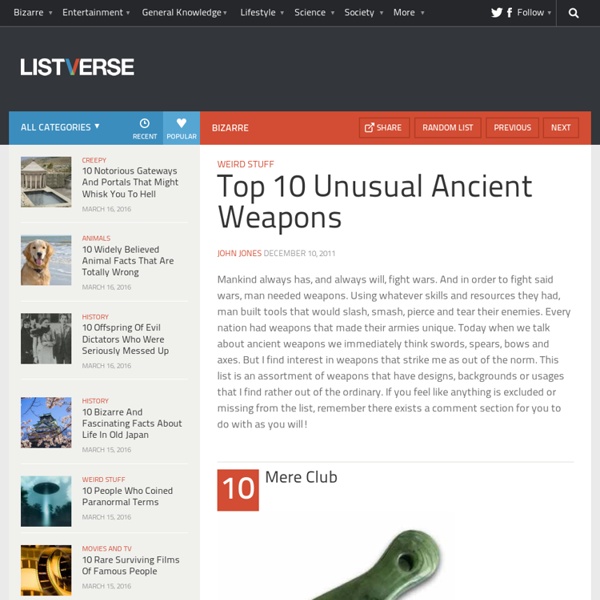 Weird Stuff Mankind always has, and always will, fight wars. And in order to fight said wars, man needed weapons. Using whatever skills and resources they had, man built tools that would slash, smash, pierce and tear their enemies. Every nation had weapons that made their armies unique. Used by the Māori tribes of New Zealand, this simple-looking, yet solid, club was built from nephrite jade. Perhaps the most well-known on this list, the Chinese hook swords were wielded by the normally passive Shoalin monks of northern China. The kpinga was a throwing knife that was used by experienced warriors of the Azande tribe. The macuahuitl was basically a large, sword-shaped piece of wood, with razor-sharp pieces of obsidian embedded in the sides. This rather odd-looking weapon was used in the arenas by the gladiators of the ancient Roman Empire. Don’t be fooled, the chakram is not something you would want to play frisbee with.

The Louvre: Highlights for Medievalists By Danielle Trynoski Le Musée du Louvre. This meandering maze lives up to all the hype. If you’re a fan of sculpture, it’s here. Oil paintings? They’re here. Tomb of Philippe Pot, the grand seneschal of Bourgogne, died 1493. Despite offering exemplary samples of almost every type of art, the Louvre showcases some great examples of medieval art. The “Eleanor” vase, a reputed gift from Eleanor of Aquitaine to the Abbey of Saint-Denis, with the eagle of Abbot Suger behind. The Decorative Arts collection is stunning. After perusing a selection of Roman sculpture and artifacts, one arrives at a glorious display of a nearly complete late Roman mosaic floor from the Church of St. Mosaic floor from St. The galleries of medieval Islamic art and artifacts are illuminating and educational. Medieval foundations at the Louvre. The medieval origins of the Louvre as a royal residence and fortress are also on display, in the Salle Basse, or Lower Hall. And finally, paintings.

Stealing the King's Crown In the year 1440, a servant woman named Helene Kottanner is given the task of stealing the crown of the King of Hungary. Helene tells us how she did it. We have very few documents from the Middle Ages that were written by women, especially those who were not high ranking members of society. However, we do have an account, The Memoirs of Helene Kottanner, that tells us the remarkable story of the theft of the Holy Crown of St. In the year 1439, Hungary was ruled by Albert II and his wife Elizabeth of Luxembourg. Helene Kottanner was one of the female servants in the royal household, and portrays herself as loyal confidant of “the noble and most gracious king.” The kingdom is thrown into an immediate crisis, as the nobles are fearful that without a strong ruler they will be invaded by the Ottoman Empire. To carry out this theft, Elizabeth called up Helen Kottanner. …they worked so hard on the other locks, that the sounds of their hammering and filing could be heard distinctly.

Bad Heritage: The Vikings in North America Bad Heritage: The Vikings in North America By Karl Steel Paper given at Nature – Culture – Ecologies: Heritage in a Transcultural Context Symposium, at Rostock University (2014) Introduction: The very first lines of Historic Newfoundland, a tourist brochure first printed in 1955, are “Come to Newfoundland! It is the cradle of white civilization in North America.” Or, rather, meet them in the middle, as they sail west. Click here to read this article from Academia.edu See also The Lure of Vikings, The Lure of Home from In the Middle The promotion of the Vikings and the L’Anse aux Meadows site in Newfoundland continues to be an important part of the province’s tourism: See also Viking Canada by Megan Arnott

Hlöðskviða Gizur challenges the Huns. Hlöðskviða or The Battle of the Goths and Huns is sometimes counted among the Eddic Poems. It has been preserved as separate stanzas interspersed among the text in Hervarar saga ok Heiðreks (chapters 13 and 14, the stanzas are numbered 1 to 32, after their arrangement within the prose). Heiðrekr, king of the Goths, had two sons, Angantýr and Hlöðr. Stanza 1 lists peoples and their rulers: After Heidrek's death, Hlod travels to Arheimar to claim half of the Gothic realm as his inheritance. Angatyr offers Hlod a third of his realm, and Gizur, the old foster-father of Heidrek's says that this is more than enough for the son of a slave. The poem ends with Angantýr finding his brother dead (stanza 32): See also[edit] References[edit] The Battle of the Goths and the Huns. External links[edit]

Fianna Historicity[edit] Geoffrey Keating, in his 17th-century History of Ireland, says that during the winter the fianna were quartered and fed by the nobility, during which time they would keep order on their behalf, but during the summer, from Beltaine to Samhain, they were obliged to live by hunting for food and for pelts to sell.[3] Keating's History is more a compilation of traditions than a reliable history, but in this case scholars point to references in early Irish poetry and the existence of a closed hunting season for deer and wild boar between Samhain and Beltaine in medieval Scotland as corroboration.[4] Legendary depiction[edit] War cry and mottos[edit] They had three mottoes: Glaine ár gcroí (Purity of our hearts)Neart ár ngéag (Strength of our limbs)Beart de réir ár mbriathar (Action to match our speech) Notable fénnid[edit] Modern use of the term[edit] In more recent history, the name Fianna Éireann has been used by a number of Irish Republican organisations. See also[edit]

Aeschylus ancient Athenian tragic playwright Aeschylus (,[1] ;[2] Greek: Αἰσχύλος Aiskhylos, pronounced [ai̯s.kʰý.los]; c. 525/524 – c. 456/455 BC) was an ancient Greek tragedian. He is often described as the father of tragedy.[3][4] Academics' knowledge of the genre begins with his work,[5] and understanding of earlier tragedies is largely based on inferences from his surviving plays.[6] According to Aristotle, he expanded the number of characters in the theatre and allowed conflict among them; characters previously had interacted only with the chorus.[nb 1] Life[edit] Aeschylus was born in c. 525 BC in Eleusis, a small town about 27 kilometers northwest of Athens, which is nestled in the fertile valleys of western Attica,[10] though the date is most likely based on counting back forty years from his first victory in the Great Dionysia. In 510 BC, when Aeschylus was 15 years old, Cleomenes I expelled the sons of Peisistratus from Athens, and Cleisthenes came to power. Death[edit] Works[edit] Sir J.

Tula, Mexico The Temple of Tlahuizcalpantecuhtli. - ('House of the Morning Star', 'Pyramid B') The major structure that remains today from the ruins of Tollán is the Temple of Tlahuizcalpantecuhtli (Lord of the House of the Morning Star) – referred to today at the site with more mundane (and more pronounceable) name of "Pyramid B." At the top of this pyramid stand four colossal statues, more than 15 feet tall, dressed as warriors. Along the base of the pyramid (on the side opposite the stairs) many Toltec carvings of jaguars, eagles and human skulls are still visible. The Telamons of Tula: ('Atlantes') These four immense statues still stand on the top of pyramid-B. The word 'Telamon' is a generic term used for any human figure used as a structural support. Tula's east-facing great warrior statues, are apparently representations not of Tezcatlipoca, but of Tlahuizcalpantecuhtli, the Plumed Serpent in his guise as Morning Star.

Balor In Irish mythology, Balor of the Evil Eye (sometimes spelled Balar or Bolar) was a king of the Fomorians, a race of giants. His father was Buarainech and his wife was Cethlenn. According to legend, he lived on Tory Island. Balor was notable for his eye in the middle of his forehead and one directly opposite at the back, which meant he couldn't be sneaked up on from behind. One legend tells that, when Balor was slain by Lugh, Balor's eye was still open when he fell face first into the ground. See also[edit] References[edit] Jump up ^ Journal of American Folklore, Vol. 61, No. 240 (Apr. - Jun., 1948), pp. 201-202Jump up ^ J.A. External links[edit] G.

Top 10 Strangest Deaths in the Middle Ages You may have heard how medieval rulers have been killed in battle or died from an assassin’s blade. But did you know about the king who died from uncontrollable laughing or the emperor who was dragged 16 miles through a forest by a deer? Check out our list of the top ten strangest deaths from the Middle Ages! Some other strange deaths from the Middle Ages: Was the White Ship disaster mass murder? Diseases and causes of death among the Popes A forgotten plague: making sense of dancing mania <A HREF=" <A HREF="

The Reverent Irreverence of Mardi Gras By Danièle Cybulskie This week, if you’ve been looking at the news, no doubt you’ve seen photo after glittering photo of celebrations of Mardi Gras / Carnival / Shrove Tuesday / Pancake Tuesday. Every year, there is a huge celebration on the day before the forty days of Lent, a time of fasting or giving up something you love to better understand the suffering of Jesus in the days leading up to Easter. In the medieval era, there were many feast days and celebrations during the Christian year. Ehrenreich reaches back to pre-Christian religious expression as a way to establish a connection to the divine through ecstatic dancing, such as during festal devotion to Dionysus in Ancient Greece. While dancing, because it was mostly recorded by people who disapproved of it, is hard to pin down, Ehrenreich may well be onto something.

Medieval Mass Grave discovered in Paris Archaeologists in the French capital have discovered more than 200 skeletons on what was once the site of a medieval hospital. It is believed that the remains date between the 14th and 16th centuries. The discovery was made in the basement of a Monoprix supermarket located on Rue Sebastopol. The archaeologists have found eight separate mass grave so far. “We expected it to have a few bones to the extent that it had been a cemetery but not find mass graves,” store manager Pascal Roy told Agence France Presse. This very large mass grave appears to correspond to a mortality crisis whose cause is currently unknown. “What is surprising is that the bodies were not thrown into the graves but placed there with care. The site was once home to l’hôpital de la Trinité, which was built in 1202. France’s National Institute for Preventive Archaeological Research (INRAP) plan to carry out extensive research on the site.

The Most Dramatic Moment of the Middle Ages! An evil king versus a good king. They are half-brothers. It’s a fight to the death. In a tent! The Middle Ages had its share of dramatic moments – battles, murders, even speeches had their share of excitement and historical importance. Alfonso XI died in 1350, a victim of the Black Death, and Pedro became the new King of Castile, under the guidance of his mother. At the heart of these intrigues was Pedro. One of the Pedro’s first victims was his father’s mistress Leonor. Now at the moment of death, I give you my final counsel – if you do not put aside the dagger, if you do not stop committing such murders, then you shall lose your realm and place your person in the greatest jeopardy. Pedro seemed to have inherited another flaw from his father – he loved his mistress more than his wife. However, at his mother’s insistence, he was arranged to be married to Blanche of Bourbon, the daughter of the Duke of Bourbon – it would solidify an alliance with France and deliver to Pedro a huge dowry.