History of the Illuminati 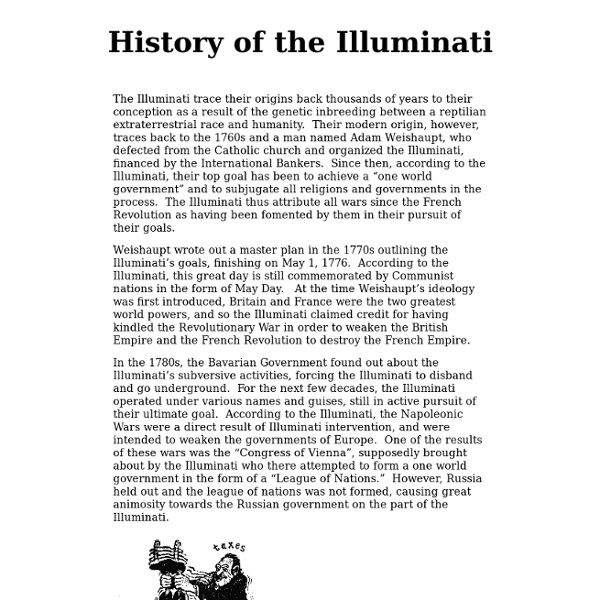 The Illuminati trace their origins back thousands of years to their conception as a result of the genetic inbreeding between a reptilian extraterrestrial race and humanity. Their modern origin, however, traces back to the 1760s and a man named Adam Weishaupt, who defected from the Catholic church and organized the Illuminati, financed by the International Bankers. Since then, according to the Illuminati, their top goal has been to achieve a “one world government” and to subjugate all religions and governments in the process. The Illuminati thus attribute all wars since the French Revolution as having been fomented by them in their pursuit of their goals. Weishaupt wrote out a master plan in the 1770s outlining the Illuminati’s goals, finishing on May 1, 1776. According to the Illuminati, this great day is still commemorated by Communist nations in the form of May Day. Their short-term plan foiled, the Illuminati adopted a different strategy. Related:  Inspiration stories, Mystery & Skeptics • 3333 • etv168

Grimm's Fairy Tales This book contains 209 tales collected by the brothers Grimm. The exact print source is unknown. The etext appears to be based on the translation by Margaret Hunt called Grimm's Household Tales, but it is not identical to her edition. The etext received by the Universal Library did not include story titles. Note that these tales are presented more or less as the Grimms collected and edited them (and as Hunt saw fit to translate them). NEW: There is now a more accurate version of the Hunt translation posted by William Barker. Quantum Light Breath What is the Quantum Light Breath? The Quantum Light Breath is a highly focused breathing meditation process that greatly accelerates the user’s personal transformation by bypassing the conscious mind and releasing old programs directly from the subconscious. It basically eliminates the need for analysis, painful emotional experiences, years of therapy or growth groups and unfruitful meditations. It usually takes the user into an expanded state of consciousness. Jeru Kabbal was a 20th century spiritual teacher and guide. He rarely spoke of his past. The early years Jeru served as an aerial photographer in the Korean War. Exploring outer and inner world Attracted by the adventures and mystics of the East, Jeru then began traveling widely, especially in Asia, seeking out and testing numerous methods of self realization he came across. Retreats and teachings In 1990, after a prolonged solitary retreat, he he was inspired to take the new name, Jeru Kabbal. Leaving the Body The benefits: Enjoy!

10 Ways to Improve Your Psychic Abilities Most people are trained to ignore intuition, so they let their psychic potential go to waste. Few realize that everyone has psychic abilities, some more than others, but everyone nonetheless. These spiritual skills can be developed and perfected; clairvoyants need little more than inner peace and meditation to keep their abilities strong. Without following certain steps, however, even psychics would be living in suspense. These ten steps that once helped them to improve their psychic abilities, and now they can help you: Believe in Yourself Negative thoughts hinder psychic abilities.

Gallery of mystery part 2 Peru bronze wheels, described by professor Rafael Larco Hoyle in his work "Peru"; they resemble very much modern gears. The famous "Kiev astronaut": it's the only European little statue found until now which shows so evident "spatial" features. Two prehistoric Japanese little statues: they represent creatures who wear special space-suits and big helmets joined to the space-suit by a sort of bolt collar. Huge limestone statue eroded by water in Lultùn Caves, in Yucatan (Mexico), today submerged at a deep of hundredths of meters under the sea level. Painting by Filippo Lippi, "La Madonna e san Giovannino", made in XV century and kept in Palazzo Vecchio, in Florence (Italy). To know more: This photo shows the remains of the Antikythera mechanism (on the right the technical scheme). Fossilized giant discovered in 1895 by Mr. The foundation of this terrace at Baalbek (Lebanon) is approximately 5 million square feet in size.

11:11 Digital Time Code 11:11 Phenomenon 11:11 Digital Time Code Reality is a consciousness program (hologram, simulation, illusion, dream) created by digital codes. The brain is an electrochemical machine (computer) that processes through binary code zeroes and ones that create patterns of experiences and realities. The illusion of physical reality is created by the patterns of the Fibonacci Sequence - the Golden Spiral of Consciousness consisting of zeros and ones that align with the brain. 11 is a double digit considered to be a Master or Power Number linked to what is called Masonic Numbers or our Reality. Seeing 11:11 frequently creates synchronicities and changes in one's life to understand reality and where consciousness is going. You may dream about the number 11, linked with things you do not as yet understand, or wake up at 11:11 every night on your digital clock. Consciousness & Reality Reality as a Hologram, Illusion of Time, Quantum Mechanics, Multiverse Quantum Entanglements: Science and Pseudoscience

Scientific evidence for survival of consciousness after death According to Wikipedia.org, "psychometry" is a psychic ability in which the user is able to relate details about the past condition of an object or area, usually by being in close contact with it. The user could allegedly, for example, give police precise details about a murder or other violent crime if they were at the crime scene or were holding the weapon used. About.com's Paranormal Phenomena website lists information about several of the most convincing psychometrists. Stefan Ossowiecki, a Russian-born psychic, is one of the most famous psychometrists. Ossowiecki claimed to be able to see people's auras and to move objects through psychokinesis. In later experiments, Ossowiecki performed remarkable psychometric feats with archeological objects - a kind of psychic archeology. Ossowiecki described his visions as being like a motion picture that he could watch, pause, rewind and fast-forward - like a videotape or DVD.

Nine Major Ways Criminals Use Facebook This Friday, Facebook will go public in one of the most anticipated IPOs in history. With more than 900 million users, Mark Zuckerberg’s expanding social media empire has become a seemingly irreplaceable part of the online experience. Unfortunately, a byproduct of its success is that millions of Americans are far more exposed to a number of cyber crimes that also teem on the site. To be sure, cyber crimes have been occurring for some time, but the presence of social media has made many crimes much easier to commit. [More from 24/7 Wall St.: 8 Products the Facebook Generation Will Not Buy] Internet security analysts warn that Facebook is a hotbed for online crime. Facebook knows that there is a problem. [Related: Facebook IPO News] Like linkjacking, malware represents yet another growing threat for Facebook users, Dr. Ultimately, all social media sites make it easier for criminals to deceive their victims. [More from 24/7 Wall St.: America’s Favorite Beers] 1. 2. 4. 5. 6. 7. 8. 9.

Ancient Alien Theory Official Site | Ancient Aliens Community Ancient Alien Theory ~ Alien Influence of Mankind? by AliensWereHere.com How did we get here? Is there proof of Ancient Alien Theory? For thousands of years, religions have attempted to answer the question where did we come from and are we alone. One of the oldest theories, new to most, is the “ancient astronaut” scenario also knows as Ancient Alien Theory. The Sumerians and the Anunnaki The Sumerians are one of the oldest known civilizations. Gobekli Tepe One of these structures that has garnered much speculation of the ancient astronaut theory is Gobekli Tepe in Southeastern Turkey. Puma Punku Another site that proponents of the ancient alien theory believe points to evidence of extraterrestrials is Puma Punku in the Bolivian Andes mountains. Nazca Lines There are many of these structures and stories throughout the world that seem to indicate there has at least been the thought of life on other planets for thousands of years. Stonehenge

girltank | blog Prepare for Change Light Force Network Casting The Runes … Lore and Legend: In Norse Mythology, the Runes came to mankind through the efforts and sacrifice of the great Norse god Odin. In the olde tale, Odin, wounded by his own blade hung upside from the Yggdrasil (pronounced ihg-drah-sil) or World Tree for nine nights until he envisioned Runic symbols. I know I hung on that windswept tree,Swung there for nine long nights,Wounded by my own blade,Bloodied for Odin,Myself an offereing to myself:Bound to the treeThat no man knowsWhither the roots of it run. None gave me bread,None gave me drink.Down to the deepest depths I peeredUntil I spied the Runes.With a roaring cry I seized them up,Then dizzy and fainting, I fell. Well-being I wonAnd wisdom too.I grew and took joy in my growth:From a word to a wordI was led to a word,From a deed to another deed. Spiritual Edict: Rune scholars believe that through the Runes, one’s nature is revealed and that through that revelation a link can be made between the Self and the Divine.