The book of Chaos, Discord and Confusion 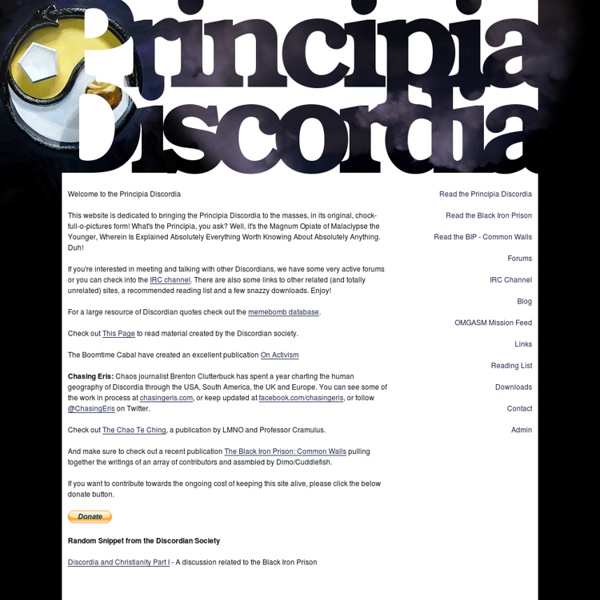 Human Resources self made scholar The best way to understand the world you live in now is to read the Western canon. By reading these classic books, you’ll develop a deep understanding of why our society is the way it is, why our government operates the way it does, and how the great ideas of history have come to shape our beliefs. You cannot truly think for yourself if you cannot recognize where your ideas and beliefs originate from. By studying the works of Western history, you’ll see that even the “modern” belief sets have been developing for hundreds of years. Once you can recognize where your preconceived beliefs come from, you become free – free to accept the knowledge that has been passed on to you or free to reject these ideas. Each Monday I plan to post a new overview of one of the Great Books of the Western World and show you where to find it for free. What is the Great Books of the Western World Series? Upon publication, Hutchins proclaimed: “This is more than a set of books, and more than a liberal education.

Steve Palmquist's Home Page 1. To see a list of all the pages on this web site (i.e., the entire HKBU domain) where a particular word or set of words appear(s), just type the keyword(s) into the form below and click the search button. If you wish to search the web site of HKBU's Faculty of Arts (where some of my web pages are located), then select that option before starting the search. If you don't find what you're looking for on this web site, you can search the entire World Wide Web by typing your keyword(s) into one of the following search engines. 2. 3. Awards, etc. This web site was initially set up between October of 1995 and February of 1996. Some of the (over 1000) pages located here are still "under construction", with some links not yet operational. My web counter identifies you as visitor number to this home page, last updated on 14 May 2010. Current Date and Time in Hong Kong .

Visions Paradox - Visual Art and Inspiration Wolfram|Alpha: Computational Knowledge Engine Collapsing Bulkheads: the Covers of Crash by Rick Poynor ‘Missing the point’: (detail, Livre de Poche edition, 1973; design: Atelier Pascal Vercken). NOTE: This is an edited version of an essay published in Designing Pornotopia: Travels in Visual Culture by Rick Poynor, Laurence King Publishing, 2006. J. Yet Crash, described by Ballard himself as a ‘psychopathic hymn’, did find a following. I read the hardback first edition of Crash as a teenager, soon after it came out. LEFT: Crash’s first jacket, designed by Bill Botton (Jonathan Cape, 1973).RIGHT: Chris Foss’s interpretation (Panther, 1975). The first jacket, published by Jonathan Cape in 1973, shows a jutting gear stick, presumably intended to be phallic, in front of a towering three-dimensional titlepiece that occupies most of the cover. (1972), treats the image as an opportunity for lurid, pulp-style exploitation. LEFT: Fashionable flirtations (illustration: James Marsh; Triad, 1985).RIGHT: ‘Too lipsticky; too neat’. Rick Poynor

The Participatory Anthropic Principle Science studies space, time, matter, and energy. Does it have a place for truth, love, beauty, or justice? Each of these depends upon “consciousness,” an “emergent property” of the material world. If intelligence here on Earth is just a statistical fluke in an otherwise lifeless universe, then categories like “beauty” or “justice” have no intrinsic meaning. In that kind of a universe, “meaning” is what humans impose on their surroundings, not something they discover within them. Modern methodogical materialism takes the position that intelligence here on Earth is, in fact, just a statistical fluke. But is this sound reasoning? John Wheeler (the physicist who coined the term “black hole”) proposed a “participatory anthropic principle” which makes the quantum concept of an “observation” even more basic than the physical realities of space, time, matter, and energy.

Upper Playground | Zuck-1 and More Facebook Office Painting with David Choe In our continuing series of posts from David Choe’s trip to Facebook this past weekend to paint the new office headquarters in Menlo Park, California, we follow Dave as he paints around Mark Zuckerberg’s desk (and on his desk and laptop for that matter), and in the Facebook lounge. Looks like the FB crew had a nice surprise or 10 when they got back to the office on Monday morning. Phenomenalism Phenomenalism is the view that physical objects cannot justifiably be said to exist in themselves, but only as perceptual phenomena or sensory stimuli (e.g. redness, hardness, softness, sweetness, etc.) situated in time and in space. In particular, some forms of phenomenalism reduce talk about physical objects in the external world to talk about bundles of sense-data. History[edit] Phenomenalism is a radical form of empiricism. Kant's "epistemological phenomenalism", as it has been called, is therefore quite distinct from Berkeley's earlier ontological version. In the late 19th century, an even more extreme form of phenomenalism was formulated by Ernst Mach, later developed and refined by Russell, Ayer and the logical positivists. Logical positivism, a movement begun as a small circle which grew around the philosopher Moritz Schlick in Vienna, inspired many philosophers in the English speaking world from the 1930s through the 1950s. Criticisms[edit] References[edit] Bibliography[edit]