Profile of the Sociopath 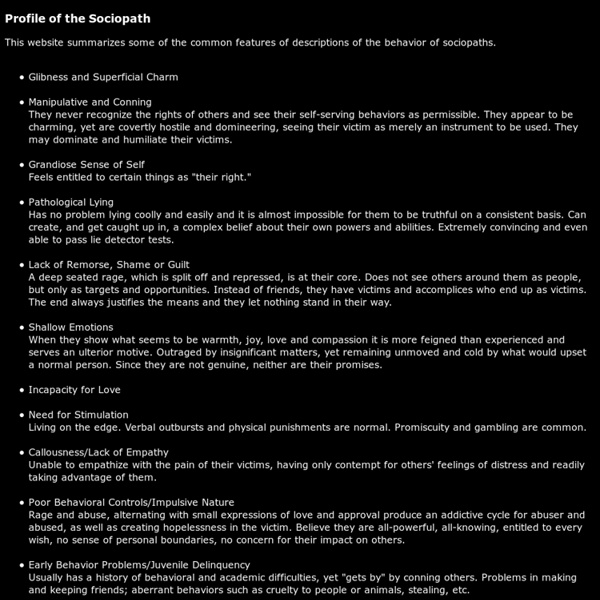 Profile of the Sociopath This website summarizes some of the common features of descriptions of the behavior of sociopaths. Glibness and Superficial Charm Manipulative and Conning They never recognize the rights of others and see their self-serving behaviors as permissible. They appear to be charming, yet are covertly hostile and domineering, seeing their victim as merely an instrument to be used. They may dominate and humiliate their victims. Grandiose Sense of Self Feels entitled to certain things as "their right." Other Related Qualities: NOTE: In the 1830's this disorder was called "moral insanity." DSM-IV Definition Antisocial personality disorder is characterized by a lack of regard for the moral or legal standards in the local culture. Diagnostic Criteria (DSM-IV) 1. 2. 3. 4. Antisocial Personality Disorder Overview (Written by Derek Wood, RN, BSN, PhD Candidate) Antisocial Personality Disorder results in what is commonly known as a Sociopath. THE PSYCHOPATH NEXT DOOR (Source:

Anatomy Of A Psychopath : The Neurobiological Basis Of Evil Editor’s Note: This is the first part of “Mind’s Matter”, a new series of articles by Dr. Jonathan Pararajasingham, exploring the Neurobiological basis of behaviour. “We serial killers are your sons, we are your husbands, we are everywhere.” – Ted Bundy One of the most controversial areas of research in neuroscience involves the search for biophysical causes of sadistic thought and behaviour. Rant on sociopathic characters I tried to prepare for this one by doing a lot of research. But a) a lot of the research contradicts itself, and b) the main point of this rant, as it is with all the ones on characterization, is not sociopathy. It’s writing characters whom the writer thinks of as sociopathic. 1) You can play with a lot of the terms under the surface. Here comes the vocabulary divide.

Psychopathic Traits – The Sociopathic Style Listed below is the Hare Psychopathy Checklist-Revised, a diagnostic tool used to identify psychopathic traits. It was compiled by Dr. Robert Hare, Emeritus Professor of Psychology at the University of British Columbia, where he has taught and conducted research for more than four decades, devoting most of his academic career to the study of psychopathy. Dr. Hare created the psychopathy checklist as a tool to determine the length of stay for criminals in prison.

Sociopath Vs. Psychopath: There is a Difference When someone hears the words psychopath or sociopath they automatically start thinking of some awful, derange, serial killer. That might have been true years ago, however the difference in the two have finally been revealed. Before understanding the two personality disorders, you first must understand what exactly each disorder consists of. The List of Psychopathy Symptoms: Hervey Cleckley and Robert Hare “I knew in my heart something was wrong with him (or with her)”. This is what nearly every victim of a psychopath has felt, usually early on in the relationship. The over-the-top flattery. The quick pace of the relationship and demands for instant commitment. The lies and inconsistencies. The callousness towards others.

Psychopaths' brains show differences in structure and function Images of prisoners' brains show important differences between those who are diagnosed as psychopaths and those who aren't, according to a new study led by University of Wisconsin-Madison researchers. The results could help explain the callous and impulsive anti-social behavior exhibited by some psychopaths. The study showed that psychopaths have reduced connections between the ventromedial prefrontal cortex (vmPFC), the part of the brain responsible for sentiments such as empathy and guilt, and the amygdala, which mediates fear and anxiety. Two types of brain images were collected. Diffusion tensor images (DTI) showed reduced structural integrity in the white matter fibers connecting the two areas, while a second type of image that maps brain activity, a functional magnetic resonance image (fMRI), showed less coordinated activity between the vmPFC and the amygdala. The study, which took place in a medium-security prison in Wisconsin, is a unique collaborative between three laboratories,

Characteristics of the Psychopathic Personality Updated September 07, 2014. The study of the psychopath reveals an individual who is incapable of feeling guilt, remorse or empathy for their actions. They are generally cunning, manipulative and know the difference between right and wrong but dismiss it as applying to them. They are incapable of normal emotions such as love, generally react without considering the consequences of their actions and show extreme egocentric and Self Test on Psychopathy ('Am I a psychopath?' - Self Assessment, Questionnaire) .:. Psychotherapy & Counseling by R.L. Fellner, Vienna & Thailand (Psychotherapist, Counselor, Coach, Supervisor) To achieve as accurate results as possible, this self-assessment combines screening methods based on the Hare Psychopathy Checklist (used in contemporary research and clinical practice to assess psychopathy) and clinical markers for narcissistic personalities and histrionic personality disorder according to the diagnostic manuals DSM-IV and ICD-10. The test thus has a relatively high potential to achieve reliable results even when done over the Internet - however, it has to be mentioned that particularly for the personality disorders tested, the quality of the result might be lower if the person doesn't answer honestly or is delusional, both parameters that are actually potential traits of a psychopathic or antisocial personality. The test involves 42 questions and will take about 10-15 minutes to complete.After submitting your answers, your results will be displayed (completely free).

Psychopath vs Sociopath Psychopathy and sociopathy are anti-social personality disorders. While both these disorders are the result of an interaction between genetic predispositions and environmental factors, psychopathy is used when the underlying cause leans towards the hereditary. Sociopath is the term used when the antisocial behavior is a result of a brain injury or negative sociological factors like parental neglect, delinquent peers, belief system and upbringing. In recent years, the term psychopath has acquired a specific meaning and the condition is now more widely understood. Psychopaths are incapable of empathy and forming loving relationships. However, they can pretend to be charming and loving, so those around them can't always detect their lack of empathy.

Codependency & Victim Blaming: Why Abuse Is Always Wrong Regardless of whether you're codependent, insecure, naive, vulnerable, or a perfectly healthy human being, abuse and exploitation are always wrong. If you're researching psychopathy, sociopathy, and narcissism, chances are, you've also come across this term called codependency. So what exactly is codependency? Ten Rules for Mystery Writing By Ginny Wiehardt Updated March 29, 2016. More than writing in many other genres, mystery writing tends to follow standard rules. This is because readers of mysteries seek a particular experience: they want the intellectual challenge of solving the crime before the detective does, and the pleasure of knowing that everything will come together in the end. Of course, the best way of testing the mystery writing rules that follow is to read widely in the genre.

Are you a Psychopath or Narcissist? Self test online. .:. Psychotherapy & Counseling Blog Jan 12 Welcome! You seem to come here for the first time. Thank you for your interest. Addiction Today: EMPATHIC PEOPLE ARE NATURAL TARGETS FOR SOCIOPATHS – PROTECT YOURSELF The empathy trap: therapists and counsellors almost by definition are empathic, to facilitate clients’ recovery – but this quality can mean those carers are targets for sociopaths, aided by what Dr Jane & Tim McGregor call “apaths”. The first UK article on this cruel sport shows how to identify and thus avoid it. Print-friendly version:Download AddictionToday145-Sociopath-empath-apath-triad People targeted by a sociopath often respond with self-deprecating comments like “I was stupid”, “what was I thinking” of “I should’ve listened to my gut instinct”.