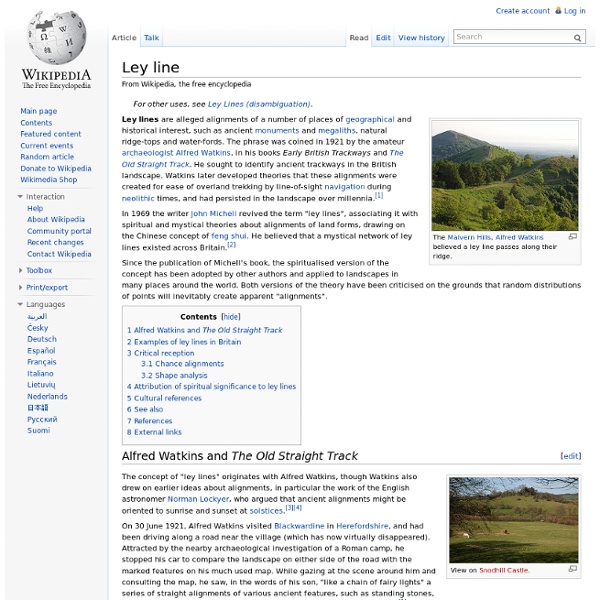 Ley lines /leɪ laɪnz/ are supposed alignments of numerous places of geographical and historical interest, such as ancient monuments and megaliths, natural ridge-tops and water-fords. The phrase was coined in 1921 by the amateur archaeologist Alfred Watkins, in his books Early British Trackways and The Old Straight Track. He sought to identify ancient trackways in the British landscape. Watkins later developed theories that these alignments were created for ease of overland trekking by line-of-sight navigation during neolithic times, and had persisted in the landscape over millennia.[1] Since the publication of Michell's book, the spiritualised version of the concept has been adopted by other authors and applied to landscapes in many places around the world. Alfred Watkins and The Old Straight Track[edit] On 30 June 1921, Alfred Watkins visited Blackwardine in Herefordshire, and had been driving along a road near the village (which has now virtually disappeared). His work referred to G.

David Sereda The Human Chakra System | Ascension 2012 A strong understanding of the chakra system is very important. However, it must be noted that there are various interpretations and models to describe the science of chakras. For this writer, the purpose here is to simply give you a basic understanding of the seven (7) primary chakras, and their role as a frequency interface between your biological body and your ethereal body. The ethereal body is located approximately 2-5cm in front and around your physical body. It is the life force body, because it provides the biological body with cellular genetic guidance. The electromagnetic energy that flows around the ethereal body is known as “Ka.” This bio energy or “Ka” is the fuel for the ethereal body. The chakras are arranged as an ascending column and start at the base of the spine and finish at the skull. The chakras could be termed "non physical organs" that operate on specific frequencies and wavelengths, and connect the biological body with the ethereal body.

Piri Reis map Surviving fragment of the Piri Reis map showing Central and South America shores. In his notes appended to it is written "the map of the western lands drawn by Columbus"[1] The Piri Reis map is a world map compiled in 1513 from military intelligence by the Ottoman admiral and cartographer Piri Reis (pronounced [piɾi ɾeis]). Approximately one-third of the map survives; it shows the western coasts of Europe and North Africa and the coast of Brazil with reasonable accuracy. Various Atlantic islands including the Azores and Canary Islands are depicted, as is the mythical island of Antillia and possibly Japan. The historical importance of the map lies in its demonstration of the extent of exploration of the New World by approximately 1510, and in its claim to have used Columbus's maps, otherwise lost, as a source. Description[edit] History[edit] After reading about the map's discovery in The Illustrated London News, United States Secretary of State Henry L. Analysis[edit] See also[edit]

Coral Castle History[edit] According to the Coral Castle's own promotional material, Edward Leedskalnin was jilted by his 16-year-old fiancée Agnes Scuffs in Latvia, just one day before the wedding. Leaving for America, he came down with allegedly terminal tuberculosis, but spontaneously healed, stating that magnets had some effect on his disease. Edward spent over 28 years building the Coral Castle, refusing to allow anyone to view him while he worked. A few teenagers claimed to have witnessed his work, reporting that he had caused the blocks of coral to move like hydrogen balloons. Leedskalnin originally built the castle, which he named Rock Gate Park, in Florida City, Florida around 1923. Leedskalnin continued to work on the castle up until his death in 1951. Leedskalnin charged visitors ten cents a head to tour the castle grounds. When asked why he had built the castle, Leedskalnin would vaguely answer it was for his "Sweet Sixteen." The Castle[edit] A view from within Leedskalnin's Coral Castle.

Top 10 Bizarre & Controversial Archeological Discoveries Many strange archeological discoveries have been made in modern history. Hundreds of artifacts have been unearthed that have baffled scientists and challenged modern man’s view of history. Many of these objects have been labeled out of place artifacts or anachronisms. These archeological discoveries are always controversial and the scientific community is extremely selective in what they accept as fact. 10. Discovered: 1944 Attempts have been made to date these figures using Thermoluminescence, or TL dating, and the results suggested a date around 2500 BCE. 9. Discovered: 1938 The alleged story of the Dropa Stones is as follows. The disks were labeled the Dropa Stones. Tsum Um Nui claims that an alien spacecraft crashed in the Bayan Har Shan region 12,000 years ago. 8. Discovered: 1880s It was not the first time that gigantic horned skulls have been unearthed in North America. 7. Discovered: 1999 The map also contains numerous inscriptions. 6. Discovered: 1974 5. 4. Discovered: 1929 3. 2.

Ray of Creation Ray of Creation The Ray of Creation is an esoteric cosmology which was taught by G. I. Levels[edit] The first level is "The Absolute", followed by "All Worlds", "All Suns", "Sun", "All Planets", "Earth", "Moon", and "The Absolute": The heaviest/last level - "The Absolute"Earth's satellite - "The Moon"Our planet - "Earth"All of the planets in the solar system to which Earth belongs to - "All Planets"The planets belong to the "Sun" or the solar systemThe Sun belongs to the Milky Way galaxy or the "All Suns" combinedAll galaxies put together belong to "All Worlds"All Worlds form a final whole called "The Absolute" This lineage indicates and compares the construction of all of the levels, matters, and laws of the Universe, placing them in scale with one another. Laws[edit] It was taught that in "The Absolute" the three holy forces form a whole, and thereby there is only one law (force) in the Absolute (which is the Will of the Absolute). Matter[edit] Higher bodies[edit] Other properties[edit]

BITNET BITNET was a cooperative USA university computer network founded in 1981 by Ira Fuchs at the City University of New York (CUNY) and Greydon Freeman at Yale University.[1] The first network link was between CUNY and Yale. The requirements for a college or university to join BITNET were simple: Lease a data circuit (phone line) from a site to an existing BITNET node.Buy modems for each end of the data circuit, sending one to the connecting point site.Allow other institutions to connect to a site without chargeback. BITNET came to mean "Because It's Time Network", although the original meaning was "Because It's There Network".[2] At its zenith around 1991, BITNET extended to almost 500 organizations and 3,000 nodes, all educational institutions. It spanned North America (in Canada it was known as NetNorth), Europe (as EARN), Israel (as ISRAEARN), India (TIFR) and some Persian Gulf states (as GulfNet). In 1996, CREN ended their support for BITNET. See also[edit] References[edit]

Digital Dead Sea Scrolls Shield of the Trinity Earliest attested version of the diagram, from a manuscript of Peter of Poitiers' writings, c. 1210. The Shield of the Trinity or Scutum Fidei is a traditional Christian visual symbol which expresses many aspects of the doctrine of the Trinity, summarizing the first part of the Athanasian Creed in a compact diagram. In late medieval England and France, this emblem was considered to be the heraldic arms of God (and of the Trinity). Basic description[edit] This diagram consists of four nodes (generally circular in shape) interconnected by six links. The three nodes at the edge of the diagram are labelled with the names of the three persons of the Trinity (traditionally the Latin-language names, or scribal abbreviations thereof): The Father ("PATER"), The Son ("FILIUS"), and The Holy Spirit ("SPIRITUS SANCTUS"). Basic "Shield of the Trinity" diagram Brief history[edit] From William Peraldus' Summa Vitiorum, c. 1255–1265. Name[edit] Variations[edit] Four variants of the "Shield of the Trinity"

NEPOMUK (framework) NEPOMUK (Networked Environment for Personal, Ontology-based Management of Unified Knowledge) is an open-source software specification that is concerned with the development of a social semantic desktop that enriches and interconnects data from different desktop applications using semantic metadata stored as RDF. Between 2006 and 2008 it was funded by a European Union research project of the same name[2] that grouped together industrial and academic actors to develop various Semantic Desktop technologies. A number of artifacts have been created in the context of the Java research implementation: WikiModel Implementation of the commercial Software as a service product Refinder[7] started in 2009 and a limited beta-version was released in December 2010.[8] Refinder was developed by Gnowsis, a spin-off company of the German Research Centre for Artificial Intelligence (DFKI) (project lead in the NEPOMUK EU project).

Atlantis or Someone Else? The report is about an Earth based scenario, a combination of the possibilities inherent in a background Earth story, some possible hypotheses by me, and then some visual evidence to add into the mix. It will be up to you to decide if there is any merit. First we'll start with the background story. In more modern times, the story of ancient Atlantis has fascinated generations and some to obsession as a real place. As many of you may know, it is acknowledged that the story of Atlantis was first introduced into public awareness via dialogues by the Greek philosopher Plato around 355–360 BC. According to the translation, it seems that the god/man Poseidon (you know, Zeus, Hera, Apollo etc.) fell in love with a human female named Cleito on the island Atlantis who bore him many sons, the oldest of which was named Atlas. However, this ignores the ancient Sumarian and Indian culture record as also referring to such "gods" in human form including conducting great wars with each other.