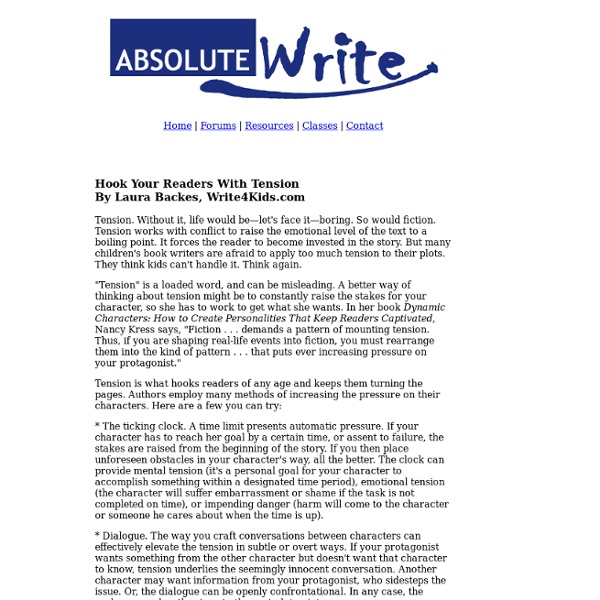 Hook Your Readers With Tension By Laura Backes, Write4Kids.com Tension. Without it, life would be—let's face it—boring. So would fiction. Tension works with conflict to raise the emotional level of the text to a boiling point. It forces the reader to become invested in the story. "Tension" is a loaded word, and can be misleading. Tension is what hooks readers of any age and keeps them turning the pages. * The ticking clock. * Dialogue. * Pacing. * Sentence structure. Each story requires a different kind of tension. Laura Backes is the author of Best Books for Kids Who (Think They) Hate to Read from Prima/Random House. Copyright © 2002, Children's Book Insider, LLC

mental_floss Blog » How to Write Movie Scenes Ever wondered how screenwriters do their thing? Lots of people have, and there's a whole genre of books out there devoted to helping up-and-comers understand the arcane art of movie-writing. Despite all the screenwriting panels and workshops and books and DVD commentaries in the world -- all the billions of words printed about screenwriting and how it's done -- when it comes down to it, most writers are relatively private about the nitty-gritty of their process.

20 Basic Plots For Story Generators - Software Secret Weapons The 20 Basic Plots are collected by the Tennessee Screenwriting Association . Writing The Perfect Scene Having trouble making the scenes in your novel work their magic? In this article, I’ll show you how to write the “perfect” scene. Maybe you think it’s impossible to write the perfect scene. After all, who can choose every word perfectly, every thought, every sentence, every paragraph?

The Thirty-Six Dramatic Situations The Thirty-Six Dramatic Situations is a descriptive list which was created by Georges Polti to categorize every dramatic situation that might occur in a story or performance. To do this Polti analyzed classical Greek texts, plus classical and contemporaneous French works. He also analyzed a handful of non-French authors. A Simple Novel Outline – 9 questions for 25 chapters « H.E. Roulo Just as every tree is different but still recognizably a tree, every story is different but contains elements that make it a story. By defining those before you begin you clarify the scope of your work, identify your themes, and create the story you meant to write. At Norwescon 2011 I sat in on a session called Outline Your Novel in 90-minutes led by Mark Teppo. I’ll give you the brief, readable, synthesized version. Answer 9 questions and create 25 chapter titles and you’re there.

Eight Secrets Which Writers Won’t Tell You Image from Flickr by Lazurite This is not particularly relevant to the post, but I’m getting an awful lot of comments telling me, often a little snarkily, “it’s ‘THAT’ not ‘WHICH’”. The “don’t use which for restrictive clauses” rule comes (as far as I can tell) from Strunk and White. How to Take Others' Ideas and Make Them Your Own Avoiding plagiarism in the internet age Thomas Edison is arguably the most famous inventor in the history of the world. But did you know that only a small fraction of the gadgets and devices he holds patents for have actually been attributed to him? That is not to say that Edison wasn’t a great inventor… he surely was. However, he ran several large workshops where he collaborated with other talented scientists, including Nickola Tesla. No one can say for certain how many of his 1,093 U.S. patens he earned on his own.

How To Write A Novel Using The Snowflake Method Writing a novel is easy. Writing a good novel is hard. That’s just life. If it were easy, we’d all be writing best-selling, prize-winning fiction. Character Chart a) If you could have two whole weeks for vacation and go and do anything you wanted, what and where would it be? b) If you had a weakness for one of the seven deadly sins, which one would it be and why? (pride, greed, lust, envy, gluttony, wrath, sloth)

writing the novel synopsis I suppose a subtitle for this subject could be: the writer’s bane. Actually the synopsis is not the terror everyone claims it to be, it’s just a matter of thinking about your novel differently. However, when most writers find they must take their seventy-plus thousand word novel and cram the entire plot into one double-spaced page, they usually start having seizures. So, everyone, take a long deep breath, get in touch with your inner peace, and let’s talk about [dramatic organ music, please] THE SYNOPSIS. 102 Resources for Fiction Writing « Here to Create UPDATE 1/10: Dead links removed, new links added, as well as Revision and Tools and Software sections. Are you still stuck for ideas for National Novel Writing Month? Or are you working on a novel at a more leisurely pace?

50 of the Best Websites for Writers There are tons of reference sites on the web that can help you find a job or write a poem, essay or story. Here is a list of the best 50 websites for writers. Reference Websites The Ultimate Guide to Writing Better Than You Normally Do. Writing is a muscle. Smaller than a hamstring and slightly bigger than a bicep, and it needs to be exercised to get stronger. Think of your words as reps, your paragraphs as sets, your pages as daily workouts.