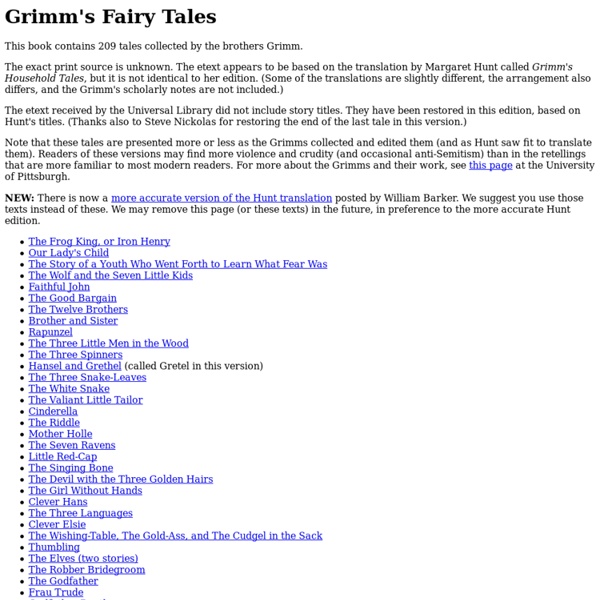 This book contains 209 tales collected by the brothers Grimm. The exact print source is unknown. The etext appears to be based on the translation by Margaret Hunt called Grimm's Household Tales, but it is not identical to her edition. (Some of the translations are slightly different, the arrangement also differs, and the Grimm's scholarly notes are not included.) The etext received by the Universal Library did not include story titles. They have been restored in this edition, based on Hunt's titles. Note that these tales are presented more or less as the Grimms collected and edited them (and as Hunt saw fit to translate them). NEW: There is now a more accurate version of the Hunt translation posted by William Barker.

Gallery of mystery part 2 Peru bronze wheels, described by professor Rafael Larco Hoyle in his work "Peru"; they resemble very much modern gears. The famous "Kiev astronaut": it's the only European little statue found until now which shows so evident "spatial" features. Two prehistoric Japanese little statues: they represent creatures who wear special space-suits and big helmets joined to the space-suit by a sort of bolt collar. One of the two "helmets" (the one on the left) provided with enormous glasses, that resemble the polar glasses used to protect eyes from the light.

The Very Secret Diaries Welcome! Here you may find the brilliant "Very Secret Diary" series by the wonderful Cassandra Claire. These are also published in her LiveJournal, but she was kind enough to agree to let your humble servant here publish them here. Enjoy! And do be sure to check out her LiveJournal. Bram Stoker Abraham "Bram" Stoker (8 November 1847 – 20 April 1912) was an Irish novelist and short story writer, best known today for his 1897 Gothic novel Dracula. During his lifetime, he was better known as personal assistant of actor Henry Irving and business manager of the Lyceum Theatre in London, which Irving owned. Early life[edit] Stoker was born on 8 November 1847 at 15 Marino Crescent, Clontarf, on the northside of Dublin, Ireland.[1] His parents were Abraham Stoker (1799–1876), from Dublin, and Charlotte Mathilda Blake Thornley (1818–1901), who was raised in County Sligo.[2] Stoker was the third of seven children, the eldest of whom was Sir Thornley Stoker, 1st Bt.[3] Abraham and Charlotte were members of the Church of Ireland Parish of Clontarf and attended the parish church with their children, who were baptised there.

Ancient maps home page Down to: 6th to 15th Centuries | 16th and 19th Centuries | 1901 to World War Two | 1946 to 21st Century The Ancient World ... index of places Aegean Region, to 300 BCE Aegean Region, 185 BCE Africa, 2500 to 1500 BCE Does Reading ‘Moral’ Stories to Children Promote Honesty? › The Next Regeneration All over the world, young children are exposed to classic fairy tales, myths and other stories. Most kids love hearing the stories, but in addition to being a fun activity, story-telling is also thought of as an educational tool which can promote moral reasoning and honesty. Conventional wisdom suggests that hearing fairy tales in which dishonest protagonists are punished might help convince the listeners to become truth-tellers.

History of the Illuminati The Illuminati trace their origins back thousands of years to their conception as a result of the genetic inbreeding between a reptilian extraterrestrial race and humanity. Their modern origin, however, traces back to the 1760s and a man named Adam Weishaupt, who defected from the Catholic church and organized the Illuminati, financed by the International Bankers. Since then, according to the Illuminati, their top goal has been to achieve a “one world government” and to subjugate all religions and governments in the process. An Imagined Girls Night With Katniss Everdeen, Hermione Granger, Bella Swan And Buffy Summers In celebration of the release of The Hunger Games in theaters, I figured there was no better way to welcome Katniss Everdeen to the pantheon of pop culture heroines, than by imagining what it would be like to be a fly on the wall during Girls Night. Clearly, Carrie Bradshaw was not invited. Buffy: Hi girls! Thanks for joining me for this Heroines of Pop Culture ladies night.

Dracula My gosh, it's full of sex! by Mysticmidget, January 10, 2013 I agree with "somethingisbrokehere". I read through this summary to aid in an essay about this book and was positively shocked...though it gave me plenty of giggles! Study Guide for Fractured Fairy Tales ***Click here...For my workshop hand-out on"Fractured Fairy Tales" and the comprehensive version Fractured Thoughts Stories - The True Story of the Three Little Pigs by Jon Scieszka - Sleeping Ugly by Jane Yolen - The Frog Prince Revisited by Marilyn Kinsella (only available on-line)ObjectiveStudents will gain a deeper understanding of the fairy tale genre by reading fractured versions of familiar tales.Standard: Students will compare and contrast the fractured tales to the originals.Before Reading First Is Best?In order for students to fully appreciate the fractured nature of these fairy tales, they must be familiar with the originals. Hold a class discussion about fairy tales. There are many definitions of a "fairy" tale. But, many genres can be used to fracture - tall tales, myths, legends, fables, folk tales, etc. Discuss the various genres and what they have in common and what sets them apart from others.

Nine Major Ways Criminals Use Facebook This Friday, Facebook will go public in one of the most anticipated IPOs in history. With more than 900 million users, Mark Zuckerberg’s expanding social media empire has become a seemingly irreplaceable part of the online experience. Unfortunately, a byproduct of its success is that millions of Americans are far more exposed to a number of cyber crimes that also teem on the site. To be sure, cyber crimes have been occurring for some time, but the presence of social media has made many crimes much easier to commit.

Douglas Hofstadter Douglas Richard Hofstadter (born February 15, 1945) is an American professor of cognitive science whose research focuses on the sense of "I",[2][3] consciousness, analogy-making, artistic creation, literary translation, and discovery in mathematics and physics. He is best known for his book Gödel, Escher, Bach: an Eternal Golden Braid, first published in 1979. It won both the Pulitzer Prize for general non-fiction[4][5] and a National Book Award (at that time called The American Book Award) for Science.[6][a] His 2007 book I Am a Strange Loop won the Los Angeles Times Book Prize for Science and Technology.[7][8][9] Early life and education[edit]

10 great science fiction novels that have been banned @djscruffy: And that's why you're a heathen and should be burned at the stake. @djscruffy: In defense of public schools, I would suggest that the reason many of these books are challenged so often is that they're frequently included in school curriculums and libraries. I grew up in a state that, according to these links, engaged in book-burning less than a decade before my birth.

Taman Shud Case Following a public appeal by police, the copy of the Rubaiyat from which the page had been torn was located. On the inside back cover of the book, detectives were able to read – in indentions from handwriting – a local telephone number, another unidentified number and a text that resembled an encrypted message. The text has not been deciphered or interpreted in a way that satisfies authorities on the case. The case has been considered, since the early stages of the police investigation, "one of Australia's most profound mysteries".[1] There has been intense speculation ever since regarding the identity of the victim, the cause of his death and the events leading up to it.