25 Things You Should Know About Character 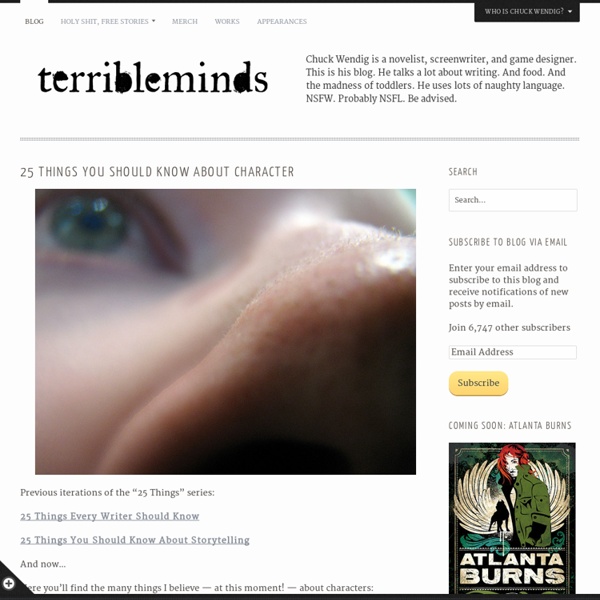 Previous iterations of the “25 Things” series: 25 Things Every Writer Should Know 25 Things You Should Know About Storytelling And now… Here you’ll find the many things I believe — at this moment! — about characters: 1. Without character, you have nothing. 2. A great character can be the line between narrative life and story death. 3. Don’t believe that all those other aspects are separate from the character. 4. The audience will do anything to spend time with a great character. 5. It is critical to know what a character wants from the start. 6. It doesn’t matter if we “like” your character, or in the parlance of junior high whether we even “like-like” your character. 7. It is critical to smack the audience in the crotchal region with an undeniable reason to give a fuck. 8. You must prove this thesis: “This character is worth the audience’s time.” 9. Don’t let the character be a dingleberry stuck to the ass of a toad as he floats downriver on a bumpy log. 10. 11. 12. 13. The law of threes.

Anne Tyler’s Tips on Writing Strong (yet Flawed) Characters Anne Tyler belongs to a disappearing generation of writers, those who came into their own in an era when it was more than enough to—well, to simply write. Intensely protective of her craft, she hasn’t given an in-person interview or participated in a book tour since 1977. In an age where writers are expected to lead double lives as self-promoters to enjoy any semblance of commercial success, Tyler carries on just as she always has, remaining steadfast in her singular devotion to her writing process. And she can get away with it, too, because she’s Anne Tyler—and she’s just that indisputably good. If Tyler’s writing career sounds like a luxury, a lofty dream come to life—penning a well-received book every few years in the quiet of her home in Baltimore, eschewing the media in favor of the companionship of her characters—it’s one she’s earned.

15 Current Technologies My Newborn Son Wont Use I was surprised when a 23-year-old co-worker told me she didn't remember a time before broadband Internet. At some point, her parents must have had dial-up, but she was so young that she doesn't even remember back that far. Wireless broadband won't dominate the home market until he's 8 to 10, but my son won't remember a world where consumers pay for wired Internet connections. Even today, 4G LTE provides comparable download speeds and better upload speeds than cable Internet, but the cost of using mobile broadband all the time is prohibitive. At some point in the next few years, broadband providers are going to realize that giving everyone home antennas is more scalable than wiring and maintaining each street's network of fiber-optic cables. At that point, the paradigm will shift and it will be cheaper to purchase wireless than wired Internet.

Physical Descriptions - List of Hair Colors Hair Color List (Note: an updated and expanded version of this list appears in my 15K-word book How to Describe Hair and Skin. See below.) [First, my profound apologies to the vast majority of readers who don't steal content, but I have to state the following. This article and all content on this website belongs to Val Kovalin, copyright © Obsidianbookshelf.com, except where noted. Unauthorized use and/or duplication of this material without written permission from Val Kovalin is strictly prohibited. Excerpts and links may be used, provided that full and clear credit is given to Val Kovalin and Obsidianbookshelf.com with a return link to the original content.]

8 Ways to be UBER Charismatic What did JFK, Marilyn Monroe and Hitler all have in common? They were all renowned charismatics that lit up every room they entered. You’ve most likely met one of these kinds before. The guy/girl at the party. Character Chart for Fiction Writers - EpiGuide.com - StumbleUpon If you're a fiction writer -- whether you're working on a novel, short story, screenplay, television series, play, web series, webserial, or blog-based fiction -- your characters should come alive for your reader or audience. The highly detailed chart below will help writers develop fictional characters who are believable, captivating, and unique. Print this page to complete the form for each main character you create. IMPORTANT: Note that all fields are optional and should be used simply as a guide; character charts should inspire you to think about your character in new ways, rather than constrain your writing. Fill in only as much info as you choose. Have fun getting to know your character!

Top 10: Conversation Etiquette Mistakes photo: *clairity* We’re all capable of the occasional social blunder. Of course, some of us seem more prone to it than others, but even the savviest people aren’t impervious to such gaffes. And no scenario is richer with these potential faux pas than the everyday conversation, in which you can say the wrong thing, do the wrong thing, and occasionally spit on others when trying to pronounce nouns with German etymology. No worries. We’ve all had our moments with conversation etiquette mistakes. Creating Stunning Character Arcs, Pt. 1: Can You Structure Characters? What if there were a sure-fire secret to creating stunning character arcs? Would you be interested in discovering it? If you care about connecting with readers, grabbing hold of their emotions, and creating stories that will resonate with them on a level deeper than mere entertainment, then the answer has to be a resounding yes!

Creative Writing Prompts: Secrets and Lies for Your Characters Nothing is better (or more fun for the writer) than a story-relevant secret or lie. Give some dilemma beneath the surface story to give your character depth, add suspense and tension, and keep your reader turning the pages. You can drop hints throughout your writing and when the reveal comes—you will surprise, shock, and delight your reader. Creating a character with a strong internal conflict, secret, or burden makes for one compelling read! (To see more on writing a compelling protagonist, check out The Compelling Protagonist Part 1 and Compelling Protagonist Part 2.)