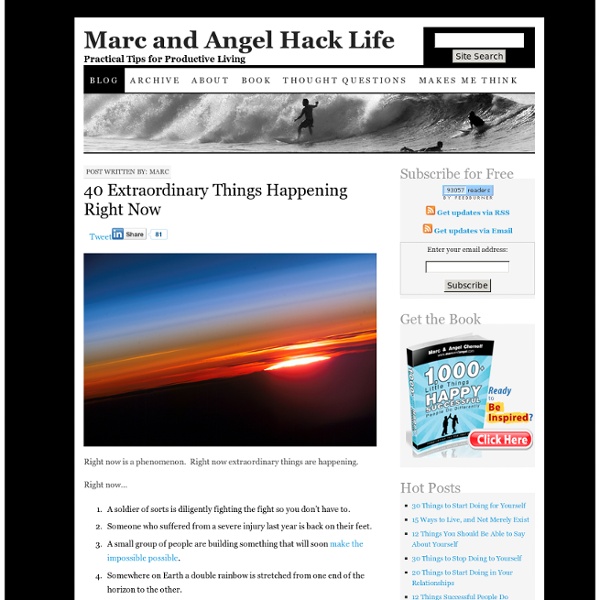 History of the Illuminati The Illuminati trace their origins back thousands of years to their conception as a result of the genetic inbreeding between a reptilian extraterrestrial race and humanity. Their modern origin, however, traces back to the 1760s and a man named Adam Weishaupt, who defected from the Catholic church and organized the Illuminati, financed by the International Bankers. Since then, according to the Illuminati, their top goal has been to achieve a “one world government” and to subjugate all religions and governments in the process. Weishaupt wrote out a master plan in the 1770s outlining the Illuminati’s goals, finishing on May 1, 1776. In the 1780s, the Bavarian Government found out about the Illuminati’s subversive activities, forcing the Illuminati to disband and go underground. Their short-term plan foiled, the Illuminati adopted a different strategy.

38 Life Lessons I've Learned in 38 Years | zen habits 15 Powerful Things Happy People Do Differently What are the differences between happy people and unhappy people? Of course, it should be very obvious: happy people are happy while unhappy people are unhappy, right? Well, that is correct. But, we want to know what happy people do differently, so I have put together a list of things that happy people do differently than unhappy people. 1. Love vs. Well, I can tell you for sure that those people who are really happy, fear less and love a lot more. 2. Happy people understand that you can’t really change a situation by resisting it, but you can definitely change it by accepting that it is there and by understanding that there might be a reason for its existence. 3. Really happy people know that it’s not healthy to hold on to anger. “Holding on to anger is like grasping a hot coal with the intent of throwing it at someone else; you are the one who gets burned.” ~ Buddha 4. They trust themselves and the people around them. 5. 6. 7. 8. 9. 10. 11. 12. 13. 14. 15. ~love, Luminita Comments

How To&8230; - StumbleUpon Embed This Infographic <a href= ‎"><img src=" title="10 How Tos" alt="How To Infographic" border="0" class="nopin" /></a><br />Source: <a href=' title='Interesting Facts'><a href=' title='Interesting Facts'>Today I Found Out</a></a> 1) How to drastically increase the life of your shaving razor Before or after you shave (I prefer before so that the blades are dry), place your jeans on a hard flat surface; then run the razor up the pant legs about 10-15 times quickly; then repeat running it down the pant legs 10-15 times quickly. The threads on the jeans then will very effectively both fix any tiny bends in the blades that inevitably happen and will also sharpen the blades on your shaver cartidge. 2) How to make your teeth whiter Baking soda makes a good teeth whitener. 1.

Grimm's Fairy Tales This book contains 209 tales collected by the brothers Grimm. The exact print source is unknown. The etext appears to be based on the translation by Margaret Hunt called Grimm's Household Tales, but it is not identical to her edition. (Some of the translations are slightly different, the arrangement also differs, and the Grimm's scholarly notes are not included.) The etext received by the Universal Library did not include story titles. Note that these tales are presented more or less as the Grimms collected and edited them (and as Hunt saw fit to translate them). NEW: There is now a more accurate version of the Hunt translation posted by William Barker.

Maslow Self Actualization - unlearn. "Self Actualization is the intrinsic growth of what is already in the organism, or more accurately, of what the organism is." Abraham Maslow Maslow studied healthy people, most psychologists study sick people. The characteristics listed here are the results of 20 years of study of people who had the "full use and exploitation of talents, capacities, potentialities, etc.." Self-actualization implies the attainment of the basic needs of physiological, safety/security, love/belongingness, and self-esteem. Maslow's Basic Principles: The normal personality is characterized by unity, integration, consistency, and coherence. Realistic Realistically oriented, SA persons have a more efficient perception of reality, they have comfortable relations with it. Acceptance Accept themselves, others and the natural world the way they are. Spontaneity, Simplicity, Naturalness Spontaneous in their inner life, thoughts and impulses, they are unhampered by convention. Problem Centering Peak experiences Creativity

One Day On Earth Gallery of mystery part 2 Peru bronze wheels, described by professor Rafael Larco Hoyle in his work "Peru"; they resemble very much modern gears. The famous "Kiev astronaut": it's the only European little statue found until now which shows so evident "spatial" features. Two prehistoric Japanese little statues: they represent creatures who wear special space-suits and big helmets joined to the space-suit by a sort of bolt collar. One of the two "helmets" (the one on the left) provided with enormous glasses, that resemble the polar glasses used to protect eyes from the light. Huge limestone statue eroded by water in Lultùn Caves, in Yucatan (Mexico), today submerged at a deep of hundredths of meters under the sea level. Painting by Filippo Lippi, "La Madonna e san Giovannino", made in XV century and kept in Palazzo Vecchio, in Florence (Italy). To know more: This photo shows the remains of the Antikythera mechanism (on the right the technical scheme).

8 Things Everybody Ought to Know About Concentrating - StumbleUpon “Music helps me concentrate,” Mike said to me glancing briefly over his shoulder. Mike was in his room writing a paper for his U.S. History class. On his desk next to his computer sat crunched Red Bulls, empty Gatorade bottles, some extra pocket change and scattered pieces of paper. Mike made a shift about every thirty seconds between all of the above. Do you know a person like this? The Science Behind Concentration In the above account, Mike’s obviously stuck in a routine that many of us may have found ourselves in, yet in the moment we feel it’s almost an impossible routine to get out of. When we constantly multitask to get things done, we’re not multitasking, we’re rapidly shifting our attention. Phase 1: Blood Rush Alert When Mike decides to start writing his History essay, blood rushes to his anterior prefrontal cortex. Phase 2: Find and Execute Phase 3: Disengagement While in this state, Mike then hears an email notification. The process repeats itself sequentially. 1. 2. 3. 4. 5. 6.