4.10: Symbiosis. On the Origins of New Forms of Life 4.10: Symbiosis (Continued from the previous page) Production of Symbiotic Associations. 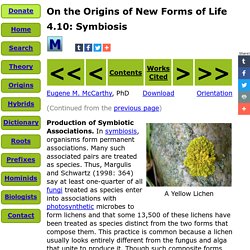 In symbiosis, organisms form permanent associations. Many such associated pairs are treated as species. A special form of symbiotic association can exist between cells, in which one type of cell lives inside another. Most shared on Macroevolution.net: The MFAP Hypothesis for the origins of Homo sapiens. I know you’re thinking we’ve had more than enough discussion of one simplistic umbrella hypothesis for the origin of unique human traits — the aquatic ape hypothesis — and it’s cruel of me to introduce another, but who knows, maybe the proponents of each will collide and mutually annihilate each other, and then we’ll all be happy. 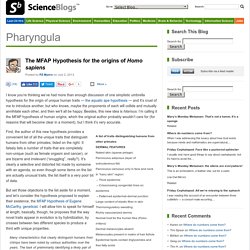 Besides, this new idea is hilarious. I’m calling it the MFAP hypothesis of human origins, which the original author probably wouldn’t care for (for reasons that will become clear in a moment), but I think it’s very accurate. FACIAL FEATURESLightly pigmented eyes commonProtruding, cartilaginous mucous nose Narrow eye openingShort, thick upper lipPhiltrum/cleft lip Glabrous mucous membrane bordering lipsEyebrowsHeavy eyelashesEarlobes RARE OR ABSENT IN NONHUMAN PRIMATES:Heart attackAtherosclerosisCancer (melanoma) Many characteristics that clearly distinguish humans from chimps have been noted by various authorities over the years. Ankylodillos and other chimeras — another crackpot alternative to evolution. It’s all Matt Dillahunty’s fault. 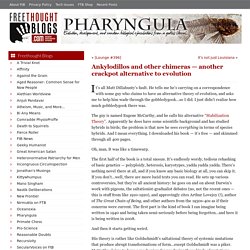 He tells me he’s carrying on a correspondence with some guy who claims to have an alternative theory of evolution, and asks me to help him wade through the gobbledygook…so I did. I just didn’t realize how much gobbledygook there was. The guy is named Eugene McCarthy, and he calls his alternative “Stabilization Theory”. Apparently he does have some scientific background and has studied hybrids in birds; the problem is that now he sees everything in terms of species hybrids.

One crank dies, another rises to take his place. The regulars here may recall John A. 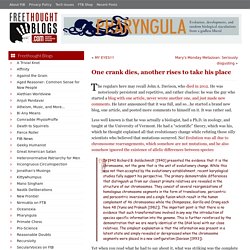 Davison, who died in 2012. He was notoriously persistent and repetitive, and rather clueless: he was the guy who started a blog with one article, never wrote another one, and just made new comments. He later announced that it was full, and so…he started a brand new blog, one article, and posted more comments to himself on it. It was rather sad. Less well known is that he was actually a biologist, had a Ph.D. in zoology, and taught at the University of Vermont. In 1940 Richard B. Yet when you read what he had to say about it, what was striking was the complete failure to read and understand the scientific literature — he had come up with his scientific theory, by God, and he didn’t have to address it critically, ever.

So he died, but you knew another had to emerge, and he has come. No, Humans Are Not Chimp-Pig Hybrids. Are Pigs Really Like People? We hear this all the time. 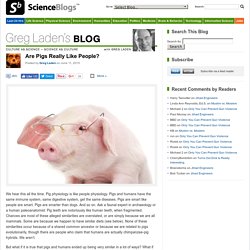 Pig physiology is like people physiology. Pigs and humans have the same immune system, same digestive system, get the same diseases. Pigs are smart like people are smart. Pigs are smarter than dogs. And so on. But what if it is true that pigs and humans ended up being very similar in a lot of ways? There are two things you need to know about this study. In a moment I’ll run down the interesting findings on pig behavior, but first I want to outline the larger context of what such results may mean. Dr. What does that mean? Humans have MSR. But we also see MSR in other species including, for example, elephants. This is why the word “relationship” is so important in this kind of research.

It is clear that Dr. One could argue, of course, that a species that is a lot like us for reasons other than shared evolutionary history is a bit spooky. I’ve been interested in pigs for a long time. Then something went off for the pigs. Grandpa the pig. It bears mention that having a Ph.D. 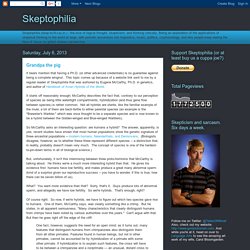 (or other advanced credentials) is no guarantee against being a complete wingnut. This topic comes up because of a website link sent to me by a regular reader of Skeptophilia that was authored by Eugene McCarthy, Ph.D. in genetics, and author of Handbook of Avian Hybrids of the World. It starts off reasonably enough; McCarthy describes the fact that, contrary to our perception of species as being little watertight compartments, hybridization (and thus gene flow between species) is rather common. Not all hybrids are sterile, like the familiar example of the mule; a lot of them are back-fertile to either parental species (an example is the "Brewster's Warbler," which was once thought to be a separate species and is now known to be a hybrid between the Golden-winged and Blue-winged Warblers).

So McCarthy asks an interesting question: are humans a hybrid? What? Of course right. Nevertheless, that doesn't stop McCarthy: