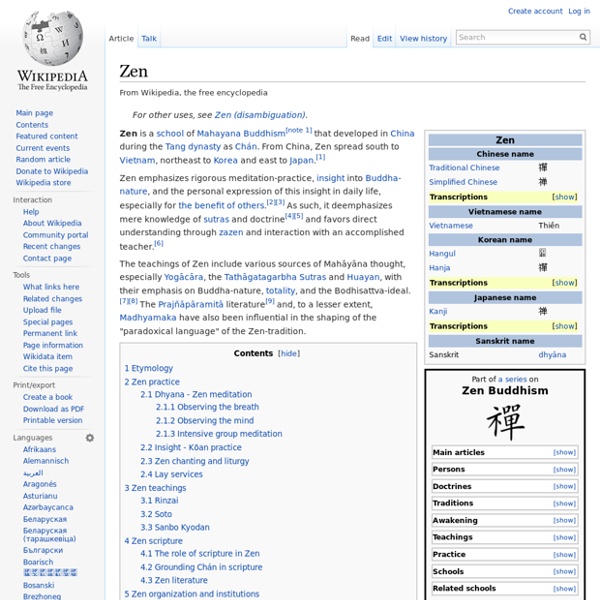 Zen is a school of Mahayana Buddhism[note 1] that developed in China during the Tang dynasty as Chán. From China, Zen spread south to Vietnam, northeast to Korea and east to Japan. Zen emphasizes rigorous meditation-practice, insight into Buddha-nature, and the personal expression of this insight in daily life, especially for the benefit of others. As such, it deemphasizes mere knowledge of sutras and doctrine and favors direct understanding through zazen and interaction with an accomplished teacher. The teachings of Zen include various sources of Mahāyāna thought, especially Yogācāra, the Tathāgatagarbha Sutras and Huayan, with their emphasis on Buddha-nature, totality, and the Bodhisattva-ideal. The Prajñāpāramitā literature and, to a lesser extent, Madhyamaka have also been influential in the shaping of the "paradoxical language" of the Zen-tradition. Etymology[edit] Zen practice[edit] Dhyana - Zen meditation[edit] Central to Zen is the practice of dhyana or meditation. Lay services[edit]

article8011035 Vedanta philosophy refers to the term “Maya” as the cosmic illusion on account of which the one appears as many, the Absolute as the Relative. Adi Sankara in the hymn Bhaja Govinda, also known as Moha Mudgara, cautions people about the power of Maya by which this entire creation is constituted, pointed out Sri B. Sundarkumar in a lecture. ‘The world is only as real as the image that is seen in a mirror,’ says the acharya in the Dakshinamurthy Stotra. Patikulamanasikara Type of traditional Buddhist meditation Translation[edit] Paṭikkūla (Pāli) literally means "against" (paṭi) "the slope" or "embankment" (kūla) and has been translated adjectivally as "averse, objectionable, contrary, disagreeable" and, in its nounal form, as "loathsomeness, impurity".[3]

www.britannica Prajnaparamita, (Sanskrit: “Perfection of Wisdom”) body of sutras and their commentaries that represents the oldest of the major forms of Mahayana Buddhism, one that radically extended the basic concept of ontological voidness (shunyata). The name denotes the female personification of the literature or of wisdom, sometimes called the Mother of All Buddhas. In the Prajnaparamita texts, prajna (wisdom), an aspect of the original Eightfold Path, has become the supreme paramita (perfection) and the primary avenue to nirvana. The content of this wisdom is the realization of the illusory nature of all phenomena—not only of this world, as in earlier Buddhism, but of transcendental realms as well. The main creative period of Prajnaparamita thought extended from perhaps 100 bce to 150 ce.

Pratītyasamutpāda Pratītyasamutpāda (Sanskrit: प्रतीत्यसमुत्पाद; Pali: पटिच्चसमुप्पाद paṭiccasamuppāda) is commonly translated as dependent origination or dependent arising. The term is used in the Buddhist teachings in two senses: On a general level, it refers to one of the central concepts in the Buddhist tradition—that all things arise in dependence upon multiple causes and conditions.On a specific level, the term is also used to refer to a specific application of this general principle—namely the twelve links of dependent origination. Etymology[edit] Pratityasamutpada (Sanskrit: प्रतीत्यसमुत्पाद) consists of two terms:

en.m.wikipedia Popular Sutra in Mahāyāna Buddhism A reproduction of the palm-leaf manuscript in Siddham script, originally held at Hōryū-ji Temple, Japan; now located in the Tokyo National Museum at the Gallery of Hōryū—ji Treasure. The original copy may be the earliest extant Sanskrit manuscript dated to the 7th–8th century CE. Buddhānusmṛti Theravada[edit] One thing — when developed & pursued — leads solely to disenchantment, to dispassion, to cessation, to stilling, to direct knowledge, to self-awakening, to Unbinding. Which one thing? en.m.wikipedia Nihilism is also a characteristic that has been ascribed to time periods: for example, Jean Baudrillard and others have called postmodernity a nihilistic epoch,[4] and some Christian theologians and figures of religious authority have asserted that postmodernity[5] and many aspects of modernity[3] represent a rejection of theism, and that such rejection of their theistic doctrine entails nihilism. Forms of nihilism[edit] Nihilism has many definitions, and thus can describe philosophical positions that are arguably independent. [edit] Metaphysical nihilism is the philosophical theory that there might be no objects at all—that is, that there is a possible world where there are no objects at all—or at least that there might be no concrete objects at all—so that even if every possible world contains some objects, there is at least one that contains only abstract objects.

en.m.wikipedia Indian philosopher Nāgārjuna (c. 150 – c. 250 CE), (Tibetan: mGon-po kLu-grub) is widely considered one of the most important Buddhist philosophers.[2] Along with his disciple Āryadeva, he is considered the founder of the Madhyamaka school of Mahāyāna Buddhism.[2] Nāgārjuna is also credited with developing the philosophy of the Prajñāpāramitā sūtras and, by some sources, with having revealed these scriptures to the world after recovering them from the nāgas. He is traditionally thought to have written many treatises on rasayana, as well as serving a term as the head of Nālandā.[3] History