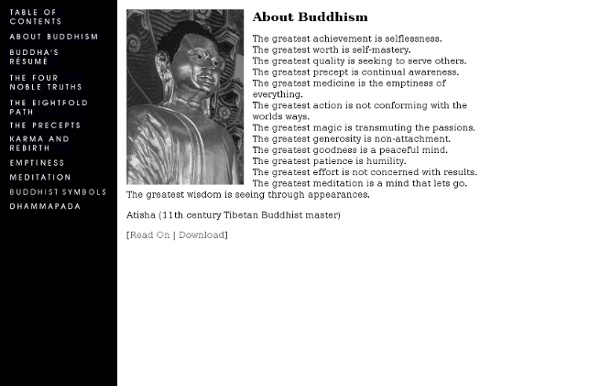 SHIN BUDDHISM IN A NUTSHELL A Brief History Originally, in the 13th century, Shin was a lay reform movement during a decadent age of monastical spiritual materialism that focused more on power, fame and gold than the original intent of Buddhism. In those days, women, butchers, samurai, fisherman, merchants etc. were forbidden to practice the dharma. It was Shinran Shonin and others who dared to challenge the religious elites, by returning the Buddhist religion to the original intent and teachings of the Buddha who stressed universal salvation, compassion and simplicity of practice. As a result, Shin opened the gates of the way to the suffering masses. For a longtime after that, Shin was relegated as a minor fringe group and was even oppressed by the government and the elites.

Pema Chodron In order to have compassion for others, we have to have compassion for ourselves. In particular, to care about other people who are fearful, angry, jealous, overpowered by addictions of all kinds, arrogant, proud, miserly, selfish, mean —you name it— to have compassion and to care for these people, means not to run from the pain of finding these things in ourselves. In fact, one's whole attitude toward pain can change. Instead of fending it off and hiding from it, one could open one's heart and allow oneself to feel that pain, feel it as something that will soften and purify us and make us far more loving and kind. The tonglen practice is a method for connecting with suffering —ours and that which is all around us— everywhere we go.

Buddhist Work: Things I Learned About Work from my Tibetan Friends Every year I travel to the North Indian Himalayas to see my Tibetan friends and Buddhist teachers. In that time I have learned a lot of life lessons and a lot of lessons about how to make my work more meaningful. In this post I want to look at a few things my Tibetan friends taught me about work.

The Three Vehicles: Hinayana, Mahayana and Tantrayana "The difference between the wise Buddhist and the sectarian Buddhist is like that between the vastness of space and the narrowness of a vase." Kongtrul Rinpoche In order to clarify the variations between the many different schools and traditions of Buddhism, the schools are often divided into the three Yanas (Skt.), meaning 'Vehicles' or 'Paths'. These three are; the Hinayana, Mahayana and Tantrayana. Within the various vehicles, much variation can still exist, which is further explained in the pages that deal with the traditions, like Zen and Tibetan Buddhism.

Tiny Buddha: Wisdom Quotes, Letting Go, Letting Happiness In - StumbleUpon “Being deeply loved by someone gives you strength, while loving someone deeply gives you courage.” ~Lao Tzu Ten years ago I thought I was going to marry my college sweetheart and become a young bride, which made it all the more devastating when happily ever after didn’t pan out. 6 Questions That Will Make You Fee Peaceful and Complete “The best place to find a helping hand is at the end of your own arm.” ~Swedish Proverb When I was in my mid-twenties an unhealthy relationship with an unhealthy guy sent me packing off to the corner of New Mexico to find myself. In a new age, self-discovery kind of world—a hubbub of a town filled with people in transition—I was graced to meet many powerful healers, gurus, shamans, and teachers. I became a workshop junkie. I went on Shamanic power journeys to spiritual centers around the world, chanted with Indian gurus, and became a certified yoga instructor and Reiki master.

100 Ways to Simplify Your Life (and Make Yourself Happier) I’ve been striving to simplify my life for many years now, and have recently (through my writing) been advising others how to do the same. In the process, I’ve learned that making little changes in our attitudes, habits, and environment can have a big impact. So today, I thought I’d compile a list of 100 ways to simplify your life – from the practical to the philosophical, and everything in between. Of course, not every item on the list will work for every person reading it. However, I hope that you’ll find at least a little something that speaks to you, helps you save some time, space, and energy — and perhaps even increases your serenity and happiness! AROUND THE HOUSE1.

Basic ideas of Yogacara Buddhism by Roger Zim A Paper Prepared for Philosophy 772 "Yogacara Buddhism"San Francisco State UniversityFall, 1995 If we do not have in ourselves the Buddha mind, then where are we to seek Buddha? INTRODUCTION: The Yogacara school, also known as the "consciousness-only" school, is a fourth century outgrowth of Mahayana Madhyamika Buddhism. The Yogacaras, "by establishing a systematic presentation of mind,...a world-view based on their three-nature theory...and...a path system..." of Buddhist practice, conceived a new philosophical system that "brought Mahayana thought to its full scope and completion." Yogacara itself is not a specific meditative practice, but is meant to be applied as a descriptive tool to understand situations of action and intention.