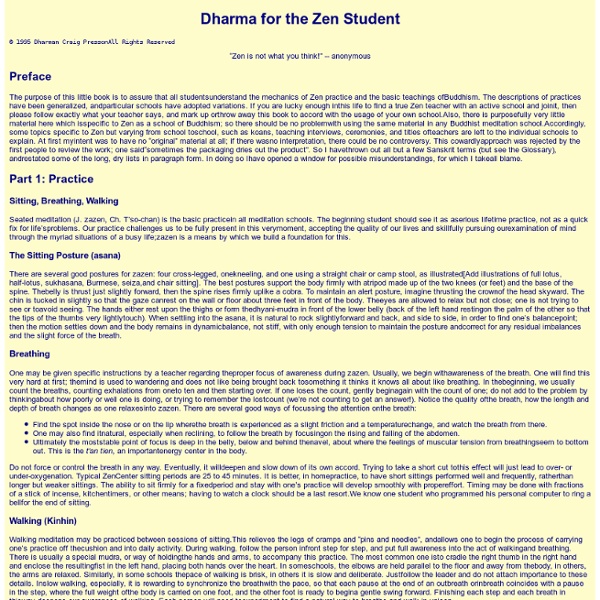 © 1995 Dharman Craig PressonAll Rights Reserved “Zen is not what you think!” -- anonymous Preface The purpose of this little book is to assure that all studentsunderstand the mechanics of Zen practice and the basic teachings ofBuddhism. The descriptions of practices have been generalized, andparticular schools have adopted variations. Part 1: Practice Sitting, Breathing, Walking Seated meditation (J. zazen, Ch. The Sitting Posture (asana) There are several good postures for zazen: four cross-legged, onekneeling, and one using a straight chair or camp stool, as illustrated[Add illustrations of full lotus, half-lotus, sukhasana, Burmese, seiza,and chair sitting]. Breathing One may be given specific instructions by a teacher regarding theproper focus of awareness during zazen. Do not force or control the breath in any way. Walking (Kinhin) Part 2: Theory The Buddha The Dharma The Four Noble Truths 1. 2. 3. This Truth is the basis of the Buddhist system. 4. The Eightfold Noble Path 1. 2. 3. 4. 5. 6.

Deep Breathing Exercises Organic Health Blog Pages Categories Home The content you requested could not be found and may not exist. What Buddhists Believe - The Buddhist Concept of Heaven and Hell The wise man makes his own heaven while the foolish man creates his own hell here and hereafter. The Buddhist concept of heaven and hell is entirely different from that in other religions. Buddhists do not accept that these places are eternal. Fallacy List 1. FAULTY CAUSE: (post hoc ergo propter hoc) mistakes correlation or association for causation, by assuming that because one thing follows another it was caused by the other. example: A black cat crossed Babbs' path yesterday and, sure enough, she was involved in an automobile accident later that same afternoon. example: The introduction of sex education courses at the high school level has resulted in increased promiscuity among teens. A recent study revealed that the number of reported cases of STDs (sexually transmitted diseases) was significantly higher for high schools that offered courses in sex education than for high schools that did not. 2.

Labyrinth In Greek mythology, the Labyrinth (Greek λαβύρινθος labyrinthos,[1]) was an elaborate structure designed and built by the legendary artificer Daedalus for King Minos of Crete at Knossos. Its function was to hold the Minotaur eventually killed by the hero Theseus. Daedalus had so cunningly made the Labyrinth that he could barely escape it after he built it.[2] In colloquial English, labyrinth is generally synonymous with maze, but many contemporary scholars observe a distinction between the two: maze refers to a complex branching (multicursal) puzzle with choices of path and direction; while a single-path (unicursal) labyrinth has only a single path to the center.

Buddhism and the God-idea Do Buddhists believe in a god? No, we do not. There are several reasons for this. The Buddha, like modern sociologists and psychologists, believed that religious ideas and especially the god idea have their origins in fear. The Buddha says: 100 Breaths Meditation This exercise will help increase concentration by using the breath as a focal point for meditation. It should take between 10-15 minutes depending on your natural pace of breathing. This is a great technique to use in the morning before you start your day, or during a break at work. Posture Posture can be very important to help minimize discomfort and/or avoid falling asleep. Sit on a comfortable cushion or rug, and try your best to keep your spine straight and head level.

Coming Home: An Integral Christian Practicum The other day I received the following email from David Riordan, announcing a 12-week online practicum lead by Leslie Flood Hershberger. I suspect that this will be of interest to quite a few who participated in The Advent of Evolutionary Christianity teleseries, especially (but not limited to) those who have found Integral Theory helpful or inspiring. I’ve met Leslie and she’s wonderful. And this program sure looks interesting and timely to me. Check it out! (Additionally, if you’ve not already done so, I invite you to take time to listen to my conversations with a dozen other Integral and Progressive Christian leaders, here.) Mindfulness In Plain English A PDF preview from the 20th edition - Click Here Special Offer - 20% Off the latest edition / The 20th Anniversary Edition - eBook or paperback / See Below "Mindfulness in Plain English" has been on UrbanDharma.org a while now for free download, but the edition I posted years ago was the first edition and is now rather dated. Over the last few months I have been in contact with the publisher at Wisdom Publications about M.I.P.E...

The Art of Living: Vipassana Meditation The following text is based upon a talk given by Mr. S.N. Goenka in Berne, Switzerland. Everyone seeks peace and harmony, because this is what we lack in our lives. From time to time we all experience agitation, irritation, dishar­mony. 12 great free online courses Much ado has been made in recent years over the quickly rising cost of healthcare in the United States. But the cost of college tuition and fees has skyrocketed at nearly twice that rate. Going to college today will cost a student 559% more than it did in 1985, on average.