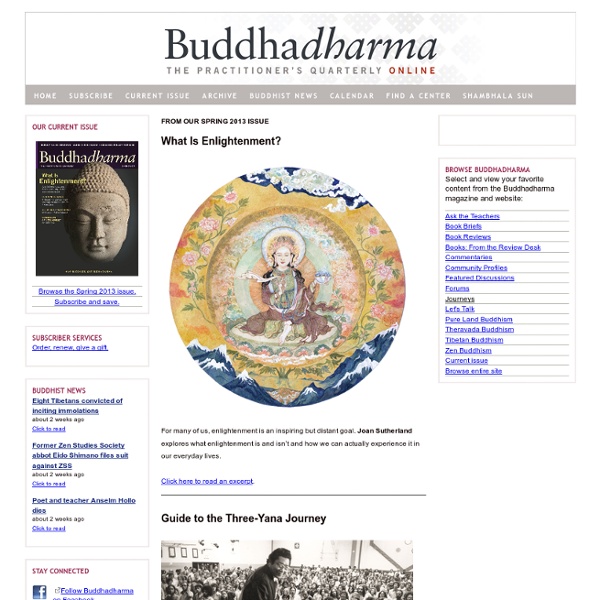 How to Meditate - Guided Meditation Techniques 'New Chinese law aimed at wiping out Tibetan identity' Joseph Goldstein | Insight Meditation Society Biography Joseph Goldstein has been leading insight and lovingkindness meditation retreats worldwide since 1974. He is a cofounder of the Insight Meditation Society in Barre, Massachusetts, where he is one of the organization's guiding teachers. In 1989, together with several other teachers and students of insight meditation, he helped establish the Barre Center for Buddhist Studies. Joseph first became interested in Buddhism as a Peace Corps volunteer in Thailand in 1965. Teaching schedule Publications Selected interviews Podcast with Tami Simon, Part 1 and Part 2 (via Sounds True) The Nature of Mindfulness Audio (via Buddhist Geeks) The Benefits of Long Term Practice The Science of Insight Text The Inner Investigation from "30 Years - Best of Buddhism" in Shambhala Sun, Dec 2009 / Jan 2010 Here, Now, Aware: The Power of Mindfulness, Shambhala Sun, Nov 2007 The Practice of Impermanence, Inquiring Mind, Fall 2000

Buddhist Geeks - Download free podcast episodes by Personal Life Media on iTunes. ShambhalaSun.com: Buddhism | Culture | Meditation | Life Wildmind Buddhist Meditation - Learn Meditation Online Urban Dharma - Buddhism in America Gentle Voice Gentle Voice Online Issue 4 "If we believe in the continuity of mind, then love inconspicuously connects us to the ones we love with continuous positive energy, so that even tangible separations between people who love each other do not reduce the intangible power of love." Thinley Norbu Rinpoche Hello Everyone, With the world so full of sad happenings, and in the case of our dear Tibetan brothers and sisters, tragic acts of despair many of us maybe feeling disheartened so as an inspiration here is Art – Unlimited. This issue has come together with enthusiastic support from Teachers and students around the world. Thank you to all of you who have contributed both outwardly and inwardly. Sarasvati Sarasvati, Deer Park Photo Noa Jones SŔĪ SARASVATI STOTRAM. YĀ KUNDEN DUTU SARĀH ADHA VALĀ Your manifestations thoroughly destroy the afflictions like the scent of the jasmine flower, YĀ SUBHRA VASTRĀ VRTĀ your appearance radiantly beautiful, shining protector Happy Year of the Water Dragon

Audio: The Buddha's Teaching As It Is", by Bhikkhu Bodhi Ten Audio lectures in on the fundamentals of the Buddha's Teaching, by Venerable Bhikkhu Bodhi Bhikkhu Bodhi is an American Buddhist monk from New York City. Born in Brooklyn, New York, in 1944, he obtained a BA in philosophy from Brooklyn College (1966) and a PhD in philosophy from Claremont Graduate School (1972). Drawn to Buddhism in his early 20s, after completing his university studies he traveled to Sri Lanka, where he received novice ordination in 1972 and full ordination in 1973, both under the late Ven. He was appointed editor of the Buddhist Publication Society (in Sri Lanka) in 1984 and its president in 1988. In May 2000 he gave the keynote address at the United Nations on its first official celebration of Vesak (the day of the Buddha's birth, enlightenment, and passing away). This course consists of 10 lectures on the fundamentals of the Buddha’s Teachings, the Dhamma: Each lecture is in two parts, making a total of 20 tracks. • Lecture 1. • Lecture 2. • Lecture 3.

Meaning of the Medicine Buddha Mantra 1. OM: we begin with Om, the under-current tone of the universe 2. NAMO: means yielding or full of trust; can also mean to bend or bow, and might mean to melt into 3. 4. 5. 6. 7. 8. 9. 10. 11. 12. 13. 14. 15. 16. (my prayer shall go to the highest and the widest and the deepest) 17. Explanation of the meaning of the Mantra Bekandze means eliminating pain, maha bekandze means great eliminating of pain. The second bekandze eliminates all the true cause of suffering, which is not external but within the mind. Scientists claim that intense exposure to the sun causes skin cancer. For example, not everyone who sunbathes on the beach gets skin cancer. If someone has created the cause, as long as they do not do anything to purify it, the cause will definitely bring its own result; just as a seed that is planted will definitely result in a sprout as long as it is not eaten by birds, and so forth. The Medicine Buddha mantra actually contains the remedy of the whole graduated path to enlightenment.

About Us Archives | BODHI MONASTERY Bodhi Monastery is a distinctive Buddhist monastery located in the rolling hills of Sussex County, New Jersey. Set on 188 acres of verdant woodlands and fields, amidst herds of deer, the monastery offers a fresh yet ancient perspective on the practice of Buddhism in today’s world. The origins of Bodhi Monastery lie in the comprehensive, non–sectarian vision of Master Yin–Shun, the foremost Chinese scholar–monk of modern times, whose work has inspired a Buddhist intellectual renaissance in Taiwan. Bodhi Monastery aims to promote the study and practice of Buddhism as an integral whole, with special focus on the clear and direct teachings of ancient Pali Buddhism and their philosophical and ethical elaboration in the early Mahayana.