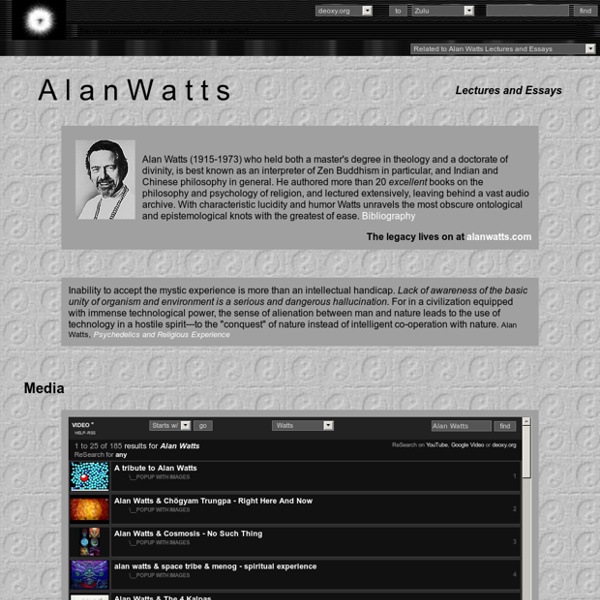 Ishtar Ishtar (pronounced /ˈɪʃtɑːr/; Transliteration: DIŠTAR; Akkadian: 𒀭𒈹 ; Sumerian 𒀭𒌋𒁯) is the East Semitic Akkadian, Assyrian and Babylonian goddess of fertility, love, war, and sex.[1] She is the counterpart to the Sumerian Inanna, and is the cognate for the Northwest Semitic Aramean goddess Astarte. Characteristics[edit] Ishtar was the goddess of love, war, fertility, and sexuality. Ishtar was the daughter of Ninurta.[2] She was particularly worshipped in northern Mesopotamia, at the Assyrian cities of Nineveh, Ashur and Arbela (Erbil).[2]

Fascinating Figures: Alan Watts I was recently asked to write a series of profiles of fascinating people and events from the 60s and 70s for a Spanish magzine called Cañamo. Because the various cultural revolutions that swept through the U.S. and the rest of Europe never made it past the dictatorship in control of Spain, the editors asked me to write about some worthy figures the Spanish might not know of. Here's the first article, about Alan Watts. Alan Watts Kāla (time) Head of Kala carved on top of Kidal temple portal, East Java. Kālá (Sanskrit: काल, IPA: [kɑːˈlə]) is a Sanskrit word which means "Time".[1] It is also the name of a deity in which sense it is not always distinguishable from kāla meaning "black". It often used as one of the various names or forms of Yama. Monier-Williams's widely used Sanskrit-English dictionary[2] lists two distinct words with the form kāla.

Zen: The Best of Alan Watts A person who thinks all the time has nothing to think about except faults, so he loses touch with reality and lives in a world of illusions. By thought I mean the chattering inside the skull; perpetual and compulsive repetition of words, of calculations, and symbols going on inside the head. For as a result of confusing the real world of nature with mere signs, such as money, stocks and bonds, title deeds, and so forth. This is a disaster. Ori (Yoruba) Ori is a metaphysical concept important to Yoruba spirituality and philosophy. Ori, literally meaning "head," refers to one's spiritual intuition and destiny. It is the reflective spark of human consciousness embedded into the human essence, and therefore is often personified as an Orisha in its own right . In Yoruba tradition, it is believed that human beings are able to heal themselves both spiritually and physically by working with the Orishas to achieve a balanced character, or iwa-pele.

The Nature Of Consciousness The legacy lives on at alanwatts.com I find it a little difficult to say what the subject matter of this seminar is going to be, because it's too fundamental to give it a title. I'm going to talk about what there is. Now, the first thing, though, that we have to do is to get our perspectives with some background about the basic ideas that, as Westerners living today in the United States, influence our everyday common sense, our fundamental notions about what life is about. And there are historical origins for this, which influence us more strongly than most people realize. Baal Bronze figurine of a Baal, ca. 14th–12th century BC, found at Ras Shamra (ancient Ugarit) near the Phoenician coast. Musée du Louvre. "Baal" may refer to any god and even to human officials. In some texts it is used for Hadad, a god of thunderstorms, fertility and agriculture, and the lord of Heaven. Since only priests were allowed to utter his divine name, Hadad, Ba‛al was commonly used.

Alan Watts Vault : The Nature of Consciousness I find it a little difficult to say what the subject matter of this seminar is going to be, because it's too fundamental to give it a title. I'm going to talk about what there is. Now, the first thing, though, that we have to do is to get our perspectives with some background about the basic ideas which, as Westerners living today in the United States, influence our everyday common sense, our fundamental notions about what life is about. And there are historical origins for this, which influence us more strongly than most people realize. Ideas of the world which are built into the very nature of the language we use, and of our ideas of logic, and of what makes sense altogether. And these basic ideas I call myth, not using the word 'myth' to mean simply something untrue, but to use the word 'myth' in a more powerful sense.

Brahma Etymology[edit] In Sanskrit grammar, the noun stem brahman forms two distinct nouns; one is a neuter noun bráhman, whose nominative singular form is brahma ब्रह्म; this noun has a generalized and abstract meaning. Contrasted to the neuter noun is the masculine noun brahmán, whose nominative singular form is brahmā ब्रह्मा. This noun is used to refer to a person, and as the proper name of a deity Brahmā it is the subject matter of the present article. Origin[edit] According to Shri Madha Bhagawata Mahapurana, Brahmā was born through Vishnu's navel, Vishnu is the main source of whatsoever exists in the world; that is created by him of a part of his own body materials in this universe,;later he was wondered about the establishment of Mankind in the planet, hence at first he has created a lotus from his navel and from lotus Brahmā origin.

Brahman In Hinduism, Brahman (ब्रह्मन् brahman) is "the unchanging reality amidst and beyond the world",[2] which "cannot be exactly defined". It has been described in Sanskrit as Sat-cit-ānanda (being-consciousness-bliss) and as the highest reality.[note 1][note 2] The Isha Upanishad says: Auṃ – That supreme Brahman is infinite, and this conditioned Brahman is infinite. The Dagda Description[edit] Despite his great power and prestige, the Dagda is sometimes depicted as oafish and crude, even comical, wearing a short, rough tunic that barely covers his rump, dragging his great penis on the ground.[1] Such features are thought to be the additions of Christian redactors for comedic purposes. Tellingly, the Middle Irish language Coir Anmann (The Fitness of Names) paints a less clownish picture: "He was a beautiful god of the heathens, for the Tuatha Dé Danann worshipped him: for he was an earth-god to them because of the greatness of his (magical) power."[2]