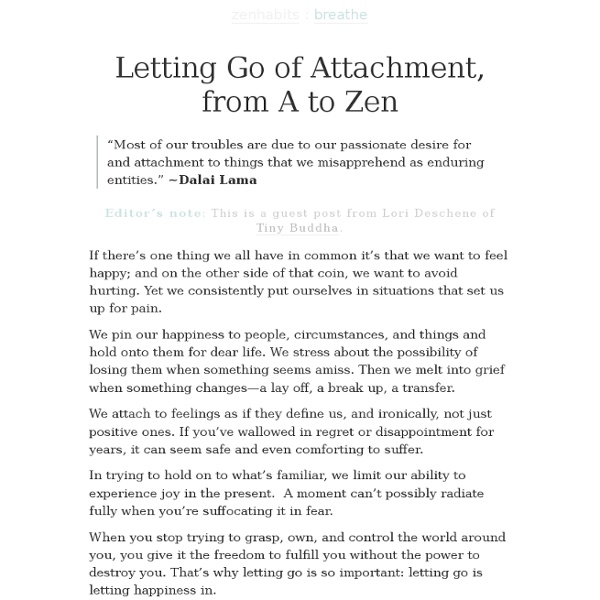 “Most of our troubles are due to our passionate desire for and attachment to things that we misapprehend as enduring entities.” ~Dalai Lama Editor’s note: This is a guest post from Lori Deschene of Tiny Buddha. If there’s one thing we all have in common it’s that we want to feel happy; and on the other side of that coin, we want to avoid hurting. Yet we consistently put ourselves in situations that set us up for pain. We pin our happiness to people, circumstances, and things and hold onto them for dear life. We attach to feelings as if they define us, and ironically, not just positive ones. In trying to hold on to what’s familiar, we limit our ability to experience joy in the present. When you stop trying to grasp, own, and control the world around you, you give it the freedom to fulfill you without the power to destroy you. It’s no simple undertaking to let go of attachment—not a one-time decision, like pulling off a band-aid. Experiencing Without Attachment Believe now is enough.

how to erase memory (PhysOrg.com) -- Researchers working with mice have discovered that by removing a protein from the region of the brain responsible for recalling fear, they can permanently delete traumatic memories. Their report on a molecular means of erasing fear memories in rodents appears this week in Science Express. “When a traumatic event occurs, it creates a fearful memory that can last a lifetime and have a debilitating effect on a person’s life,” says Richard L. Huganir, Ph.D., professor and director of neuroscience at the Johns Hopkins University School of Medicine and a Howard Hughes Medical Institute investigator.

10 Ways to Play the Most Beautiful Open Chord Shapes 10 Ways to Play the Most Beautiful Open Chord Shapes Part I A great way to make your chord progressions and songs sound awesome is to use open chord shapes. I always love to use these chords to add some flavor to my chord progressions. One of my favorite chords is Fsus2.That chord has got the whole package for me. It’s sounds beautiful, gentle, tight, cool and rough at the same time. How to Be Alone I once knew a man who hated to be alone. It panicked him to the point where he sought to fill all of his waking hours with people. On the streets, at the bus stop, in restaurants, if he was unaccompanied he would soon find someone to talk to.

Tips for Living an Extraordinary Life by Henrik Edberg Is truth stranger than fiction? Perhaps. In this great article written by Henrik Edberg, we find that Mark Twain had expressed in his writings over the years an entire philosophy for living. If he were around today, it seems he would be on the lecture circuit with the likes of Eckhart Tolle or Wayne Dyer. Most underrated songs by the most overrated artists. Songs for when you’re stuck in the friend zone… Requested by Big Teddy Bear · Compiled by BFFE Man, do I know the feeling. Six Steps to Meditation This meditation lasts 15 to 20 minutes. It is a meditation of SIX steps. Each step will take roughly two and half to about three minutes.

The 100 Best Lifehacks of 2010: The Year in Review Happy New Year everyone! It’s the first week of 2011 and many of us are getting ready to kick off the brand new year with a big bang. As we start off 2011 with our new resolutions and goals, let us now look back at the best posts at Lifehack in the past year. In this review post, I have gathered 100 of the best LifeHack articles in 2010.

The most amazing Article I've ever read and anyone else would. This is what we should be presribing depression. by mlharrington Sep 25