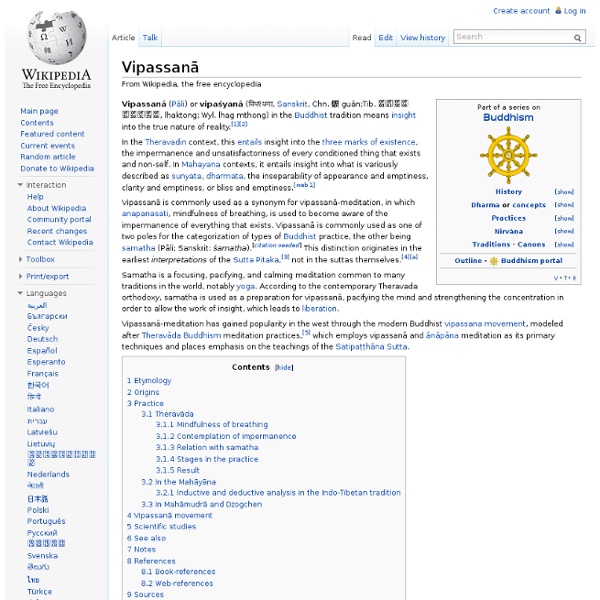 Vipassanā (Pāli) or vipaśyanā (विपश्यना, Sanskrit; Chn. 觀 guān; Tib. ལྷག་མཐོང་, lhaktong; Wyl. lhag mthong) in the Buddhist tradition means insight into the true nature of reality.[1][2] In the Theravadin context, this entails insight into the three marks of existence - (1) the impermanence of and (2) the unsatisfactoriness of every conditioned thing that exists, and (3) non-self. In Mahayana contexts, it entails insight into what is variously described as sunyata, dharmata, the inseparability of appearance and emptiness (two truths doctrine), clarity and emptiness, or bliss and emptiness.[3] Vipassanā is commonly used as a synonym for vipassanā-meditation, in which satipatthana, four foundations of mindfulness or anapanasati, "mindfulness of breathing," is used to become aware of the impermanence of everything that exists. Samatha is a focusing, pacifying, and calming meditation common to many traditions in the world, notably yoga. Etymology[edit] Henepola Gunaratana defined Vipassanā as:

Buddhism Religion founded by the Buddha Buddhism (, ) is an Indian religion based on a series of original teachings attributed to Gautama Buddha. It originated in ancient India as a Sramana tradition sometime between the 6th and 4th centuries BCE, spreading through much of Asia. It is the world's fourth-largest religion[3] with over 520 million followers, or over 7% of the global population, known as Buddhists.[6] Buddhism encompasses a variety of traditions, beliefs and spiritual practices largely based on the Buddha's teachings (born Siddhārtha Gautama in the 5th or 4th century BCE) and resulting interpreted philosophies. Two major extant branches of Buddhism are generally recognized by scholars: Theravāda (Pali: "The School of the Elders") and Mahāyāna (Sanskrit: "The Great Vehicle"). Theravada has a widespread following in Sri Lanka and Southeast Asia such as Cambodia, Laos, Myanmar and Thailand. Life of the Buddha Worldview Four Noble Truths – dukkha and its ending The cycle of rebirth Saṃsāra

Skandha In the Theravada tradition, suffering arises when one identifies with or clings to an aggregate. Suffering is extinguished by relinquishing attachments to aggregates. The Mahayana tradition further puts forth that ultimate freedom is realized by deeply penetrating the nature of all aggregates as intrinsically empty of independent existence. Etymology[edit] Outside of Buddhist didactic contexts, "skandha" can mean mass, heap, pile, gathering, bundle or tree trunk.[3][c] According to Thanissaro, the buddha gave a new meaning to the term "khanda": Prior to the Buddha, the Pali word khandha had very ordinary meanings: A khandha could be a pile, a bundle, a heap, a mass. Description in the Sutta Pitaka[edit] The Sutta Pitaka of the Pali Canon contains the teachings of the Buddha, as preserved by the Theravada tradition. The five skandhas[edit] The sutras describe five aggregates:[d] Suffering and release[edit] Understanding dukkha[edit] Clinging causes future suffering[edit] ... No essence[edit]

U Dhammaloka In this Burmese name, U is an honorific. U Dhammaloka (Burmese: ဦးဓမ္မလောက; c. 1856 – c. 1914) was an Irish-born hobo (migrant worker)[1] turned Buddhist monk, atheist critic of Christian missionaries, and temperance campaigner who took an active role in the Asian Buddhist revival around the turn of the twentieth century. Dhammaloka was ordained in Burma prior to 1900, making him one of the earliest attested western Buddhist monks. Buddhist Tract Society stationery. Early life[edit] Dhammaloka's early life and given name are as yet uncertain. Burmese career[edit] In Burma, he found work in Rangoon as a tally clerk in a logging firm before becoming interested in the Burmese Buddhism he saw practised all around him. British forces enter Mandalay in 1885 marking the final conquest of Burma. After some years' absence Dhammaloka returned to Burma in 1907, establishing the Buddhist Tract Society (see below). Other Asian projects and travels[edit] Singapore[edit] Japan[edit] Siam[edit] Notes[edit]

Zen Zen is a school of Mahayana Buddhism[note 1] that developed in China during the Tang dynasty as Chán. From China, Zen spread south to Vietnam, northeast to Korea and east to Japan. Zen emphasizes rigorous meditation-practice, insight into Buddha-nature, and the personal expression of this insight in daily life, especially for the benefit of others. The teachings of Zen include various sources of Mahāyāna thought, especially Yogācāra, the Tathāgatagarbha Sutras and Huayan, with their emphasis on Buddha-nature, totality, and the Bodhisattva-ideal. Etymology[edit] The word Zen is derived from the Japanese pronunciation of the Middle Chinese word 禪 (dʑjen) (pinyin: Chán), which in turn is derived from the Sanskrit word dhyāna, which can be approximately translated as "absorption" or "meditative state". Zen practice[edit] Dhyana - Zen meditation[edit] Central to Zen is the practice of dhyana or meditation. Observing the breath[edit] Venerable Hsuan Hua meditating in the Lotus Position. Soto[edit]

Chandragupta Maurya Chandragupta Maurya (340 BC – 298 BC) was the founder of the Mauryan Empire and the first emperor to unify India into one state. He ruled from 322 BC until his voluntary retirement and abdication in favour of his son Bindusara in 298 BC.[2][3][4] After unifying India, Chandragupta and his chief advisor Chanakya passed a series of major economic and political reforms. He established a strong central administration patterned after Chanakya’s text on politics, the Arthashastra (English: Economics and Political Science). Mauryan India was characterised by an efficient and highly organised bureaucratic structure with a large civil service. Due to its unified structure, the empire developed a strong economy, with internal and external trade thriving and agriculture flourishing. Chandragupta was influenced to accept Jainism by the sage Bhadrabahu; he abdicated his throne to spend his last days at the Shravana Belgola, a famous religious site in southwest India, where he fasted to death.

Meontology Meontology is the philosophical study of non-being or the philosophical discourse concerning the negation of the actual being of something, but not its possibility.[1] History[edit] Nishida was the first to thoroughly expand the Eastern notion of nothingness in the Continental paradigm and is thus responsible for bringing to the West a clearer understanding of the Buddhist notion of non-being. It can also be associated more recently, with the emphasis placed upon absence or deferral by both Martin Heidegger and Jacques Derrida. Levinas on meontology[edit] For Emmanuel Levinas, what was meontological was what had meaning beyond being, beyond ontology; for him this was the ethical, the primary demand of the other in the face-to-face encounter. See also[edit] Meonism References[edit]

Mettā Mettā (Pali: मेत्ता in Devanagari) or maitrī (Sanskrit: मैत्री) is loving-kindness,[1][2] friendliness,[3][4][5] benevolence,[2][4] amity,[3] friendship,[4] good will,[4] kindness,[3][6] close mental union (on same mental wavelength),[4] and active interest in others.[3] It is one of the ten pāramīs of the Theravāda school of Buddhism, and the first of the four sublime states (Brahmavihāras). This is love without clinging (upādāna). "Compassion meditation" is a contemporary scientific field that demonstrates the efficacy of metta and related meditative practices. Basic methods[edit] Mettā meditation is regularly recommended to the Buddha's followers in the 2,500-year-old Pali canon. Visuddhimagga instructions[edit] This traditional approach is best known for identifying successive stages of meditation during which one progressively cultivates loving-kindness towards: Buddha sends love to all beings. Contemporary trainings[edit] All sentient beings desire happiness and do not desire misery.