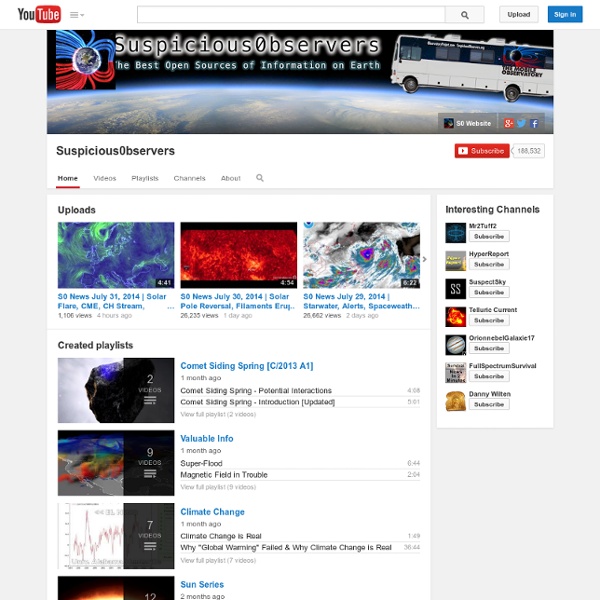 Climate Viewer News - Mapping Climate Change, Pollution, and Privacy Breathingearth - CO2, birth & death rates by country, simulated real-time ZergNet - Discover Interesting Articles The Extinction Protocol: 2012 and beyond | 2012 and Earthchanges News events Dutchsinse Civilian investigator Is the New Madrid Mega Quake Being Engineered? The Powers-That-Be seem to be making a continuous effort to drive a stake right into America's heart(land). Natural disasters are on the rise, and an increasing amount of evidence is leading to the conclusion that these natural disasters might not be completely natural. Louisiana Sink Hole - Will This Trigger the Big One? As you peruse the points below and the accompanying illustrations, you'll see a very clear, seriously dangerous weak spot. If someone wanted to deal a disastrous blow to this nation, where would you trigger a "natural disaster" if you could? The recent developments with the growing Louisiana sinkhole caving into a potentially massively explosive gas repository also used for nuclear waste storage is something to keep a close eye on and take very seriously. Will A New Madrid Quake Be Natural, Manipulated, or Both? The Evidence of a Plan Predictive Programming -- This is where the groundwork is laid for directing people toward an imagined future. Disaster Making in the Making

DRUDGE REPORT 2014® SOLARCYCLE 24.com / SolarHam.com / Solar Cycle 24 / Spaceweather / Amateur Radio VHF Aurora Website / Sunspots / Solar Flares Tornado Weather Modification and HAARP A situation is gaining national interest due to investigative journalist and human rights defender known as Dutch Since, who specializes in HAARP weather warfare and unmistakably predicted this week's series of deadly southland's storms with extraordinary accuracy. He allegedly bases his predictions on HAARP rings and scaler squares that he documents on video using official US data. On the 26th, Since presented geo-engineering information in a video that indicated areas in the south that would be hit. Geo-engineering, the artificial modification of the earth's climate systems, is an environment modification (ENMOD) science for "deliberate manipulation of natural processes - the dynamics, composition or structure of the Earth, including its biota, lithosphere, hydrosphere and atmosphere, or of outer space that can be applied as a weapon of mass destruction." Weather Mitigation "Half-moon shapes indicate an epicenter," explains Since, among many details he explains in his videos.

Writing Is Thinking Writing is intimidating. There’s this expectation of artful precision, mercurial grammatical rules, and the weird angst that comes with writing for other people. You start with a tidy nugget of an idea, but as you try to string it into language, it feels more like you’re pulling out your own intestines. But you’re not a writer, so this isn’t your problem, right? Well, the thing is, writing is not some mystic art. Done well, it means you’re contributing signal, instead of noise. No one’s born with this skill, though. But writing sucks. I mean, yeah. Think about the things you had to look up on the internet just to figure out how to do your current job. Choosing the words to describe your work means you’re doing it on purpose. Starting with something messy#section2 Thinking: check. When the words aren’t forthcoming, stick to paraphrasing. In other words, it’s a rough draft. With this, you have formally started writing. Coming to your point#section3 Your rough draft is the yakking.