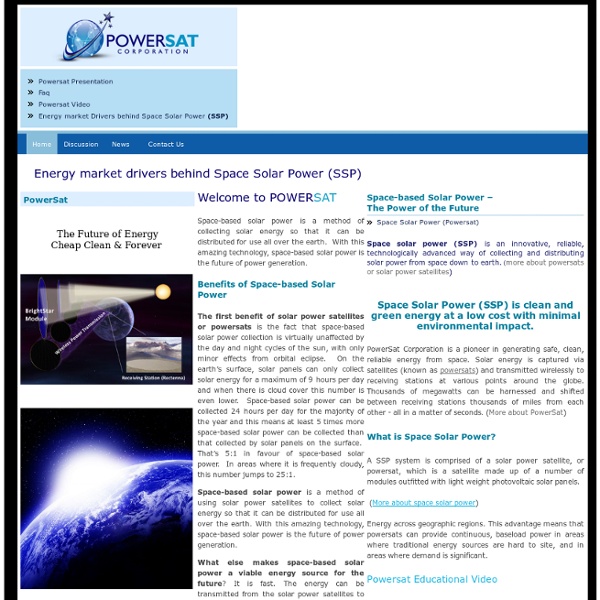 Laptops * Prices, specifications, availability and terms of offers may change without notice. Quantity limits may apply to orders, including orders for discounted and promotional items. Despite our best efforts, a small number of items may contain pricing, typography, or photography errors. Correct prices and promotions are validated at the time your order is placed. Ultrabook, Celeron, Celeron Inside, Core Inside, Intel, Intel Logo, Intel Atom, Intel Atom Inside, Intel Core, Intel Inside, Intel Inside Logo, Intel vPro, Itanium, Itanium Inside, Pentium, Pentium Inside, vPro Inside, Xeon, and Xeon Inside are trademarks of Intel Corporation in the U.S. and/or other countries. CNET and the CNET logo are the trademarks of CBS Interactive Inc.

Czech Space Alliance (czechspace.eu) Competition Grows For Orbital Solar Power Jun June 25, 2009 | 35 Comments PowerSat Corp. has filed a provisional patent for two technologies called BrightStar and Solar Power Orbital Transfer, that are expected make the transmission of space solar power more cost-effective by reducing the price for launch and operation of systems as large as 2,500 megawatts by about $1 billion. This follows Solaren’s recently signed deal for the first-ever power purchase agreement to deliver 200 megawatts of solar energy from space with California’s Pacific Gas & Electric. Meanwhile the Swiss company Space Energy is working toward the launch of a prototype satellite in the next 2 to 3 years. Quickly reviewing, the idea is to use orbiting satellites, called powersats, to collect solar energy in space, many times more potent than the hottest brightest desert sun and beam it down to earth. PowerSat Corp., a partner of PowerSat Limited in London and a subsidiary of PowerSat International in Gibraltar has filed U.S. PowerSat's Brightstar.

Human Space & Exploration Systems Mission Updates Feature Stories News Room Careers at Orbital Power company plans first orbital solar power satellite - Boing Boing Pacific Gas and Electric is reportedly seeking permission to test a solar power satellite, which would send energy generated in orbit to a radio receiver station in Fresno County, California. the solar energy available in space is eight-to-ten times greater than on earth. There’s no atmospheric or cloud interference, no loss of sun at night, and no seasons. That means space solar can be a baseload resource, not an intermittent source of power.In addition, real estate in space is still free (if hard to reach). Solaren needs to acquire land only for an energy receiving station. It can locate the station near existing transmission lines, greatly reducing delays that face some renewable power projects sited far from existing facilities.While the concept of space solar power makes sense, making it all work at an affordable cost is a major challenge, which Solaren says it can solve. Unfortunately, despite the 200 megawatt output. the frequency used means that it’s completely safe.

Orbital Sciences Corporation Japan Plans $21 Billion Solar Space Post to Power 294,000 Homes The concept of space-based solar power was introduced way back in 1968, but it’s only recently that the world has latched on to the idea. Japan is definitely getting in on the action with its latest spacey plan – a $21 billion solar-powered generator in the heavens to produce one gigawatt of energy, or enough to power 294,000 homes. The Japanese government announced the plan back in June, but there has been an important new development – Mitsubishi Electric Corp. and industrial design company IHI Corp. are now teaming up in the race to develop new technology within four years that can beam electricity back to Earth without the use of cables. Mitsubishi and IHI are joining a research group containing 14 other countries to tackle the daunting task of getting Japan’s four square kilometer solar space station up and running in the next three decades. There are still a number of hurdles to work through before space-based solar power becomes a reality though. Via Bloomberg

Space Future Journal - Space-based Solar Power by 2016? In 2009, Manhattan Beach, CA-based company Solaren, Inc. signed a contract with Pacific Gas & Electric (PG&E) to provide 200 megawatts (MW) of clean, reliable electrical power to customers at a rate comparable with existing power generation facilities. But unlike hydroelectric, coal, fossil fuel, and nuclear production, this power will come from that constant, inexhaustible source, the Sun. This is known as “Space Based Solar Power,” and until recently, it was also known as “science fiction.” But in the here and now, Solaren designers have developed a system involving multiple satellites to be delivered into geosynchronous orbit ( GEO ) on heavy lift launch vehicles similar to the Falcon 9 being tested successfully by the US firm SpaceX Solaren plans this for 2016—and as of now, the company is on schedule. To learn more about the current status of the project, Space Future Journal interviewed Mr. Cal Boerman: Solaren was issued our US patent No. 2006/185726-A1 on August 24, 2006. system.

Science & Environment - Space-based solar farms power up It would solve our energy needs overnight. But with huge technological and financial challenges, can space-based solar power ever take off? “Ex-Nasa scientist seeks visionary billionaire to help change the world. High risk venture. John Mankins, the scientist in question, has not yet reached the point of placing a classified ad, but it could soon be an option. Mankins initially had research funding from an advanced concepts arm at Nasa, but that money dried up in September 2012; hence his continuing search for a benefactor. “I can't think of a better solution than to find somebody who is very wealthy, very visionary and willing to make this happen,” he says. But not everyone shares Mankins' optimism. High times SBSP has its roots in the 1941 short story Reason, by Isaac Asimov, which depicts a space station – run by robots – collecting energy from the sun to distribute to Earth and other planets. “England dominated the world economy during the industrial revolution because of coal.