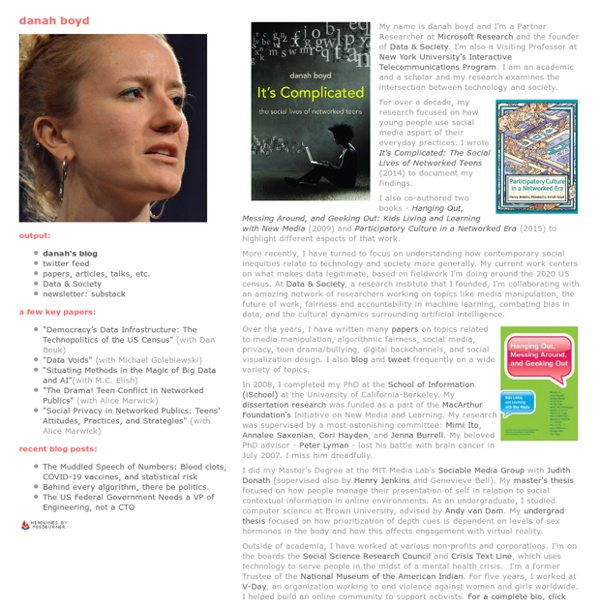 My new book released on February 25! Order it now! <grin> About Me My name is danah boyd and I'm a Principal Researcher at Microsoft Research, a Research Assistant Professor in Media, Culture, and Communication at New York University, and a Fellow at Harvard's Berkman Center. I am an academic and a scholar and my research examines social media, youth practices, tensions between public and private, social network sites, and other intersections between technology and society.

The World Is a Symphony - From the series: Sparks of Things to Come - Ethics & Morality All that exists sings. Not that it exists and it sings. No. Its song is its being. Brad's Thoughts on the Social Graph Translations: [ Беларускі ] I've been thinking a lot about the social graph for awhile now: aggregating the graph, decentralization, social network portability, etc. If you've seen me at any conference recently, I probably talked your ear off about it.

Clay Shirky Fifteen years ago, a research group called The Fraunhofer Institute announced a new digital format for compressing movie files. This wasn’t a terribly momentous invention, but it did have one interesting side effect: Fraunhofer also had to figure out how to compress the soundtrack. The result was the Motion Picture Experts Group Format 1, Audio Layer III , a format you know and love, though only by its acronym, MP3. The recording industry concluded this new audio format would be no threat, because quality mattered most. Who would listen to an MP3 when they could buy a better-sounding CD at the record store? Then Napster launched, and quickly became the fastest-growing piece of software in history.

Mark D. Griffiths Mark D. Griffiths is an English chartered psychologist focusing in the field of Behavioural Addictions, namely Gambling Disorder, Gaming Addiction, Internet Addiction, Sex Addiction, and Work Addiction. He is a Professor of Gambling Studies at Nottingham Trent University, and director of the International Gaming Research Unit.[1] He is the author of several books, including Gambling Addiction and its Treatment Within the NHS, Gambling and Gaming Addictions in Adolescence, Adolescent Gambling and over 400 refereed papers, 70 book chapters and more than 1,000 articles,[1] and has won several awards for his research, including a Lifetime Achievement Award For Contributions to the Field of Youth Gambling in 2006 and International Excellence Award For Gambling Research in 2003.[2] Education and Early career[edit]

The Mysterious Reappearance of Consciousness I recently published an article on IAI News criticizing the bizarre notion—called ‘eliminativism’ or ‘illusionism’ in philosophy—that phenomenal consciousness, experience itself, with its felt qualities, doesn’t actually exist. This position is held, among others, by Princeton neuroscientist Michael Graziano, who has published a reply to my essay, to which this article is a response. Let me start by saying that I appreciate Graziano’s willingness to engage; this is the only way that we will slowly inch our way towards clarity and—hopefully—some level of consensus regarding the nature of consciousness. It is also in the same spirit that I offer this rejoinder, for—as attentive readers will have noticed—Graziano’s reply doesn’t require a reaction: if anything, it unintentionally strengthens and confirms my original criticisms, making my own points better than I did.

Explaining what the “Social Graph” is to your Executives Many are talking about the Social Graph at the technical level, leaving many business folks with many questions. The following, using clear business language (void of tech speak), will explain what is the Social Graph, why it matters, and what you should do. In respecting your time, I’ve boiled down the entire post to seventy words: Executive SummaryThe Social Graph is the representation of our relationships. Howard Rheingold Syllabi Social Media Literacies (Based on Net Smart) First taught at Stanford, Winter 2013. Editable Google Doc version (ask me for editing privs) and editable Google Doc high school version (ask me). Social Media Issues I’ve taught this course at Stanford since 2007.

Howard Rheingold Media Lab Conversations Series: Howard Rheingold Thursday, May 10, 2012 | 2:00pm - 4:00pm All talks at the Media Lab, unless otherwise noted, are open to the public. Join us on Twitter: #MLTalks Co-Presented with the MIT Press. How can we use digital media so that they help us become empowered participants rather than passive consumers? Why Would Philosophers Deny That Consciousness Is Real? A Dutch computer scientist and philosopher who has reflected deeply on the mind–matter problem finds himself asking, how can serious scientists or philosophers convince themselves that their own consciousness “doesn’t exist” or is a “mistaken construct”? What, exactly, is thinking the thought that their consciousness doesn’t exist? I want to understand what makes the consciousness of an intelligent human being deny its own existence with a straight face. For I find this denial extremely puzzling for both philosophical and psychological reasons. Don’t get me wrong, the motivation behind the denial is obvious enough: it is to tackle a vexing problem by magically wishing it out of existence. As a matter of fact, the ‘whoa-factor’ of this magic gets eliminativists and illusionists a lot of media attention.

Meet The First Miners of the New Social Graph George Stephanopoulos. Wolf Blitzer. Ana Marie Cox. 15 Inspiring TED Talks You've selected your classes and shopped for your dorm room. You've bought some new clothes and packed your favorite things. The new semester is around the corner and you're as ready as you'll ever be.