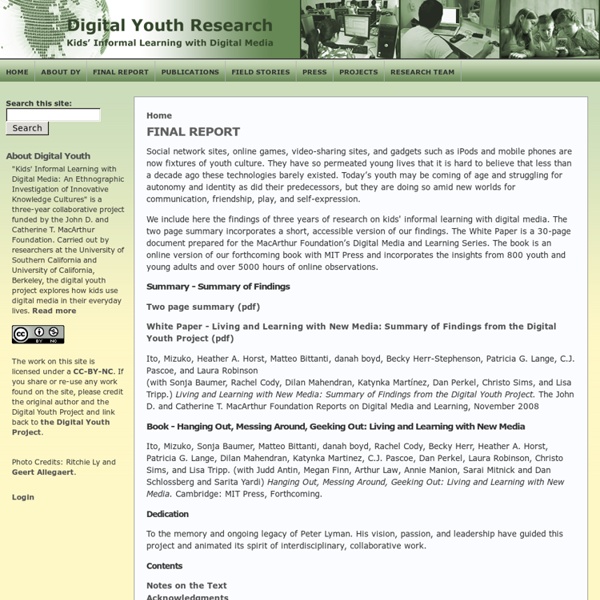 Social network sites, online games, video-sharing sites, and gadgets such as iPods and mobile phones are now fixtures of youth culture. They have so permeated young lives that it is hard to believe that less than a decade ago these technologies barely existed. Today’s youth may be coming of age and struggling for autonomy and identity as did their predecessors, but they are doing so amid new worlds for communication, friendship, play, and self-expression. We include here the findings of three years of research on kids' informal learning with digital media. The two page summary incorporates a short, accessible version of our findings. Summary - Summary of Findings Two page summary (pdf) White Paper - Living and Learning with New Media: Summary of Findings from the Digital Youth Project (pdf) Ito, Mizuko, Heather A. Book - Hanging Out, Messing Around, Geeking Out: Living and Learning with New Media Ito, Mizuko, Sonja Baumer, Matteo Bittanti, danah boyd, Rachel Cody, Becky Herr, Heather A.

How Parents Normalized Teen Password Sharing In 2005, I started asking teenagers about their password habits. My original set of questions focused on teens’ attitudes about giving their password to their parents, but I quickly became enamored with teens’ stories of sharing passwords with friends and significant others. So I was ecstatic when Pew Internet & American Life Project decided to survey teens about their password sharing habits. Pew found that one third of online 12-17 year olds share their password with a friend or significant other and that almost half of those 14-17 do. I love when data gets reinforced. Last week, Matt Richtel at the New York Times did a fantastic job of covering one aspect of why teens share passwords: as a show of affection. Meixing, 17, TN: It made me feel safer just because someone was there to help me out and stuff. For Meixing, sharing her password with her boyfriend is a way of being connected. The idea of teens sharing passwords didn’t come out of thin air. Can password sharing be abused?

This Is Generation Flux: Meet The Pioneers Of The New (And Chaotic) Frontier Of Business Whether the digital era improves society is up to its users – that's us | Danah Boyd Most technology designers engage in their trade to make the world a better place. Technologists love to celebrate the amazing things that people can do with technology – bridge geography, connect communities and transform societies. Meanwhile, plenty of naysayers bemoan the changes brought on by technology, highlighting issues of distraction and attention for example. Unfortunately, this results in a battle between those with utopian and dystopian viewpoints, over who can have a more extreme perspective on technology. One of my favourite maxims about the role of technology in society is called Kranzberg's first law. With this complexity in mind, I would like to introduce a question that I have been struggling with for the past few years: what role does social media play in generating or spreading societal fear? This question is grounded in three foundational claims: 1. Fear and attention Fear is an important emotion. Fear can also be enticing. Yet, fear can also be a tool of control.

m.guardian.co.uk This month, the US chain Walmart bought the startup Social Calendar, one of the most popular calendar apps on Facebook, which lets users record special events, birthdays and anniversaries. More than 15 million registered users have posted over 110m personal notifications, and users receive email reminders totalling over 10m a month. Of course, when a Social Calendar user listed a friend's birthday or details of a holiday to Malaga, she or he probably had no idea the information would end up in the hands of a US supermarket. The second decade of the 21st century is epitomised by Big Data. The most important thing for data holders in the Big Data age is the kind of information they have access to. Aggregated, this data can prove powerful. In a trend that is remarkably similar to the plotline of Philip K Dick's Minority Report, Big Data is being used to predict social unrest or criminal intent. Expectations of privacy are being renegotiated. The weakest link is the technology itself.

The Evolution from Private to Public: Is There Privacy in the Digital Age? Duration: Approximately 60 minutes. Cost: Free Sponsored by: O'Reilly authors, Terence Craig & Mary Ludloff, "Privacy and Big Data" Moderator: Natalie Fonseca, Co-Founder and Executive Producer, Privacy Identity Innovation It is safe to say that the digital age has fundamentally changed all our lives. Certainly, it has given us the ability to share more information with more people (and more companies) than ever before. The evolution of the public (versus private) persona.The upsides and downsides of living a more transparent life.What our expectation of privacy should be in the digital age and what responsibilities companies have to protect personal information. Join the panelists as they consider the evolution from private to public: how are our worlds colliding in the digital age? About Jim Adler Jim Adler is the Chief Privacy Officer and General Manager of Data Systems at Intelius. Prior to Intelius, Mr. About danah boyd About Terence Craig About Natalie Fonseca About Heather West

Privacy in an Era of Social Media The Mediasite presentation cannot be played back. The requested presentation content can be played using the following plugins:WindowsMedia, Silverlight We have detected that your browser supports the following plugins:None Danah Boyd: Why Parents Help Tweens Violate Facebook's 13+ Rule "At what age should I let my child join Facebook?" This is a question that countless parents have asked my collaborators and me. Often, it's followed by the following: "I know that 13 is the minimum age to join Facebook, but is it really so bad that my 12-year-old is on the site?" While parents are struggling to determine what social media sites are appropriate for their children, government tries to help parents by regulating what data internet companies can collect about children without parental permission. Yet, as has been the case for the last decade, this often backfires. In order to understand how parents were approaching this dilemma, my collaborators -- Eszter Hargittai (Northwestern University), Jason Schultz (University of California, Berkeley), John Palfrey (Harvard University) -- and I decided to survey parents. While Facebook has often sparked anger over its cavalier attitudes towards user privacy, Zuckerberg's challenge with regard to COPPA has merit.