Danah boyd. The World Is a Symphony - From the series: Sparks of Things to Come - Ethics & Morality. All that exists sings. 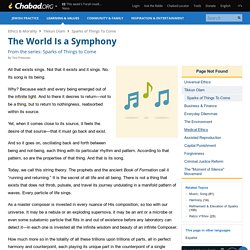 Not that it exists and it sings. No. Its song is its being. Why? Because each and every being emerged out of the infinite light. Yet, when it comes close to its source, it feels the desire of that source—that it must go back and exist. And so it goes on, oscillating back and forth between being and not-being, each thing with its particular rhythm and pattern. Today, we call this string theory. As a master composer is invested in every nuance of His composition, so too with our universe. How much more so in the totality of all these trillions upon trillions of parts, all in perfect harmony and counterpoint, each playing its unique part in the counterpoint of a single symphony.

That is the way it is in all the higher, spiritual worlds. Once we find that harmony, our world responds with a symphony to outshine all others. Create harmony—at home, at work, in all the world around you. FREUD VERSUS JUNG: AN ELABORATION OF A RECENT DEBATE CONCERNING BASIC PSYCHOLOGICAL CONCEPTIONS† H. G. BAYNES. Does Art Originate From the Same Necessity That Gives Rise to Beehives? Nature has its necessity, its direction, its force. 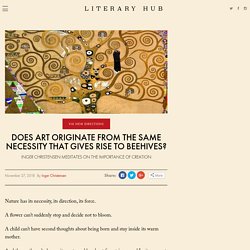 A flower can’t suddenly stop and decide not to bloom. A child can’t have second thoughts about being born and stay inside its warm mother. And the earth can’t change its route and head out for a trip around Jupiter, or out beyond the solar system. Article continues after advertisement. Anthro{dendum} Why Would Philosophers Deny That Consciousness Is Real? A Dutch computer scientist and philosopher who has reflected deeply on the mind–matter problem finds himself asking, how can serious scientists or philosophers convince themselves that their own consciousness “doesn’t exist” or is a “mistaken construct”? 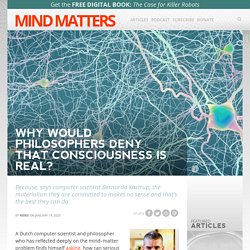 What, exactly, is thinking the thought that their consciousness doesn’t exist? I want to understand what makes the consciousness of an intelligent human being deny its own existence with a straight face. For I find this denial extremely puzzling for both philosophical and psychological reasons. The Mysterious Reappearance of Consciousness. I recently published an article on IAI News criticizing the bizarre notion—called ‘eliminativism’ or ‘illusionism’ in philosophy—that phenomenal consciousness, experience itself, with its felt qualities, doesn’t actually exist. 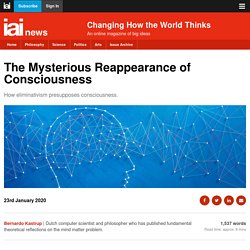 This position is held, among others, by Princeton neuroscientist Michael Graziano, who has published a reply to my essay, to which this article is a response. Let me start by saying that I appreciate Graziano’s willingness to engage; this is the only way that we will slowly inch our way towards clarity and—hopefully—some level of consensus regarding the nature of consciousness. Bicameralism. Legislature with two chambers A bicameral legislature has legislators in two separate assemblies, chambers, or houses. 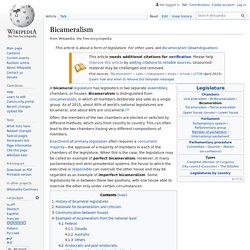 Bicameralism is distinguished from unicameralism, in which all members deliberate and vote as a single group. As of 2015[update], about 40% of world's national legislatures are bicameral, and about 60% are unicameral.[1] Often, the members of the two chambers are elected or selected by different methods, which vary from country to country. This can often lead to the two chambers having very different compositions of members. Enactment of primary legislation often requires a concurrent majority—the approval of a majority of members in each of the chambers of the legislature.

History of bicameral legislatures[edit] Many nations with parliaments have to some degree emulated the British "three-tier" model. Flow – A Measure of Student Engagement. When I first heard about Czikszentmihalyi’s “Flow” concept and research, I became quite intrigued with this research. 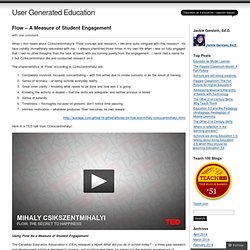 Its face validity immediately resonated with me. I always cherished those times in my own life when I was so fully engaged that I had no other thoughts than the task at hand, with joy coming purely from the engagement. Mr Tayer - Teilhard de Chardin. Photo was not included in story Or there was the time that Mr. 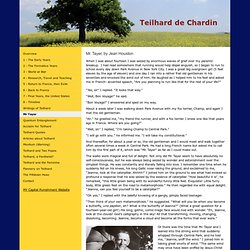 Tayer and I leaned into the strong wind that suddenly whipped through Central Park, and he told me, “Jeanne, sniff the wind. " I joined him in taking great snorts of wind. Talk Less. Listen More. Here’s How. Good listeners ask good questions. 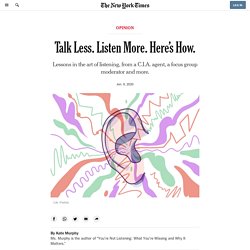 One of the most valuable lessons I’ve learned as a journalist is that anyone can be interesting if you ask the right questions. That is, if you ask truly curious questions that don’t have the hidden agenda of fixing, saving, advising, convincing or correcting. It’s time to tune in: why listening is the real key to communication. 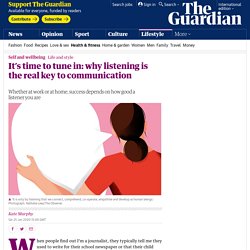 Or they might say they loved a film about a newsroom, but can’t remember the name. They might try to look up the film on their phones and, while they are at it, will show me a cat video trending on Twitter. It’s rare that people don’t interrupt and shift conversation to themselves. Bad listeners are not necessarily bad or boorish people. Why Intentionally Building Empathy Is More Important Now Than Ever. “I don’t argue that what we want is maximal empathy at all times,” Zaki said. 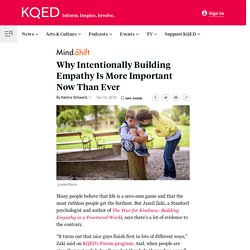 “If you felt everyone’s pain at all times, you wouldn’t make it down one block in San Francisco without falling down in a heap.” And, he recognizes that there are many professions that experience empathy fatigue, which is why he thinks empathy is a skill and a tool that needs to be cultivated and used at the right times. Part of functioning in this world is to know when to fall back and when to employ empathy. Those in helping professions like teaching, social work, or medicine can buffer themselves from burnout and “compassion fatigue” with self-care strategies, including meditation and social support. A study of nurses in acute mental health settings found staff support groups helped buffer the nurses, but only if they were structured to minimize negative communication and focused on talking about challenges in constructive ways.

When A Heart Goes Walking Around Outside Your Body - Letters to Solomon - Medium. “Making the decision to have a child — it’s momentous. It is to decide forever to have your heart go walking around outside your body.” — Elizabeth Stone In many ways, today was a day like any other. In some ways, it was a first — which wasn’t actually a first. It was the first day you went to daycare, the first day you spent all day away from your home — but which also wasn’t the first time we left you in someone else’s care.

When we dropped you off in the morning, you barely batted an eye lash. ... en vue. Memory in Miniature. The conscious man is not identified by the intensity of his consciousness, but by the constancy of it. Ruminie. Ricaner. *joi de vivre. Libraria. Myth Story Tale. Rigmarole. Revealing. Roundabout. Super memo learning. T.ripping. META.PHUSIKA.