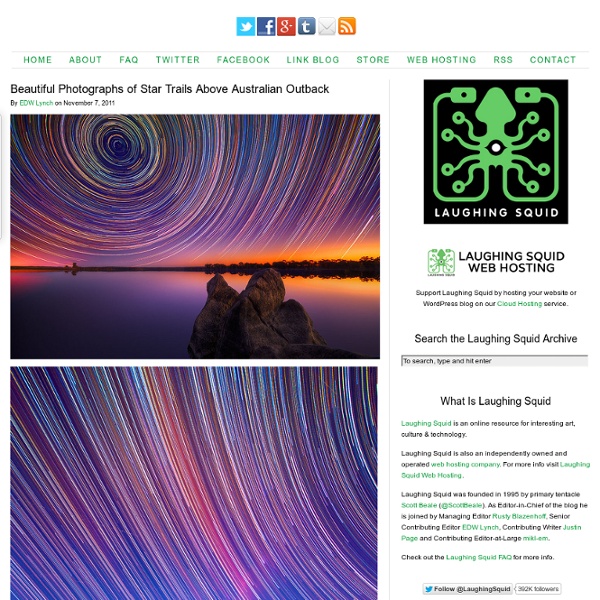 Laughing Squid Beautiful Photographs of Star Trails Above Australian Outback by EDW Lynch at 5:21 pm on November 7, 2011 Australian photographer Lincoln Harrison captures long exposures of gorgeous star trails in the night sky above the Australian outback. He describes the grueling (and freezing) process of capturing the photos in the Daily Mail. via PetaPixel & New School of Photography

Most Amazing Sand Sculptures Most Amazing Sand Sculptures Anyone who has ever been to the beach has probably tried to sculpt a simple sand structure of some sort.Well leave it to the pros, because we have some great sand sculpture pictures listed below. 36 Comments: rachael said... I've tried making sandcastles before.. I suck. The Top 50 'Pictures of the Day' for 2011 Every day at 5pm the Sifter posts the Picture of the Day. Below you will find a collection of the Sifter’s Top 50 from 2011. It’s hard to imagine the year is almost over, time seems to fly faster each successive year so it’s fun to take a moment and look back at the year that was. Crystal River - The most beautiful river on earth [Pics] Cano Cristales - Crystal River. River of five colors, as the locals call it, originates in the south of the mountain chain Macarena, Colombia, and flows eastward to its confluence with the Guayabero river. In the Cano Cristales found five colors: yellow, blue, green, black and red. All of them are waste product of many algae and, depending on time of year, color saturation, or weakened or strengthened.

The 2012 Astronomy Photographer of the Year competition winners Australian based photographer Martin Pugh has claimed the top prize in the Royal Observatory’s Astronomy Photographer of the Year competition for the second time, after originally winning the accolade back in 2009. As well as securing the £1,500 top prize, his image takes pride of place in the exhibition of winning photographs opening at the Royal Observatory Greenwich on 20 September. Pugh impressed the judges in this year’s competition with the depth and clarity of his winning shot depicting the famous Whirlpool Galaxy (M51). The image combines incredible detail in the galaxy’s spiral arms with the faint tails of light that show M51’s small companion galaxy being gradually torn apart by the gravity of its giant neighbour; a closer look also reveals more distant galaxies beyond.

The Top 25 Photo Galleries of 2011 Dec 29, 2011 Below you will find a collection of the Sifter’s top 25 galleries posted in 2011. Often the most popular posts on the site, the galleries not only take our readers around the world, but back in time as well. Some galleries even show us the farthest reaching points of the Cosmos and the thriving microscopic world invisible to the human eye.

Amazing jellyfish lake Jellyfish Lake is a marine lake located on Eil Malk island in Palau. Eil Malk is part of the Rock Islands, a group of small, rocky, mostly uninhabited islands in Palau’s Southern Lagoon, between Koror and Peleliu. It is notable for the millions of golden jellyfish which migrate horizontally across the lake daily. photo source Jellyfish Lake is connected to the ocean through fissures and tunnels in the limestone of ancient Miocene reef. However the lake is sufficiently isolated and the conditions are different enough that the diversity of species in the lake is greatly reduced from the nearby lagoon.

20 awesome examples of street art If you still need a proof that art can be found anywhere, those awesome examples of great street art should convince you. National Geographic Photo Contest 2011 - In Focus National Geographic is currently holding its annual photo contest, with the deadline for submissions coming up on November 30. For the past nine weeks, the society has been gathering and presenting galleries of submissions, encouraging readers to vote for them as well. National Geographic was kind enough to let me choose among its entries from 2011 for display here on In Focus. Gathered below are 45 images from the three categories of People, Places, and Nature, with captions written by the individual photographers. [45 photos]

Miniature racetrack sculpture, inspired by cult film Metropolis, takes artist 4 years to make By Louise Boyle Updated: 14:04 GMT, 10 January 2012 The 1927 science-fiction film Metropolis is an expressionistic portrayal of a dystopian, capitalist society which has become a cult classic among movie lovers. Artist Chris Burden used the film by German director Fritz Lang as the inspiration for his racetrack sculpture and spent four years building Metropolis II. The model city features 1,100 toy cars zipping around a track through miniature skyscrapers, at speeds of up to 230mph. The kinetic sculpture is set to open to the public at the Los Angeles County Museum of Art in California on January 14.

Awesome pictures from around the world Someone sent me these in a chain email, it was horribly formatted. I also do not know who made the comments, or how accurate they are. I take zero credit in the pictures, I just wanted to compile them nicely for all to see. The world’s highest chained carousel, located in Vienna, the height of 117 meters. Thor’s Well – “the gates of the dungeon.” Water wonderful world! Photographer captures amazing images in a single droplet By Daily Mail Reporter Updated: 10:34 GMT, 11 October 2011 These incredible images are little drops of magic - capturing iconic images within a single droplet of water. Photographer Markus Reugels spends hundreds of hours painstakingly trying to capture the impressive and beautiful images. Amazingly Creative Drawing Vs Photography This wonderful work has done by a very talented Belgian painter, illustrator, portraitist, caricaturist and photographer Ben Heine. This creative artist was born in Abidjan, Ivory Coast. He Studied graphic arts and sculpture and I also have a degree in journalism. Lets take a look at some of his awesome works that he calls “Drawing Vs Photography” or “Imagination Vs Reality”.

Incredible Space Pics from ISS by NASA astronaut Wheelock Go Discovery! It was October 23, 2007 at 11:40am EST when I had my first ride to space on Discovery. She’s beautiful… just sad that this will be her last voyage. Looking forward to climbing aboard the flight deck when Discovery arrives at the Space Station in November. (9-23-2010). Incredible Photos from Space: Larry Tanner, NASA. Special thanks: Bethbeck’s blog