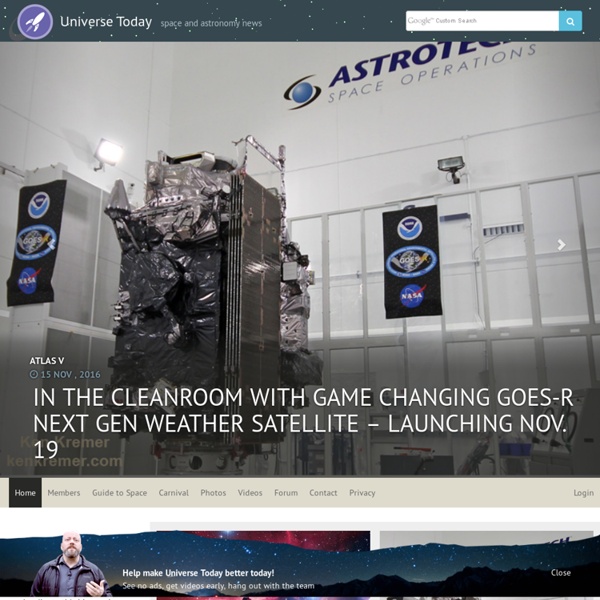 The Falcon 9 and Dragon capsule stand ready for launch prior to the detection of a helium leak in one of the engines forcing a scrub of the launch attempt on April 14. 2014 – now reset to April 18, 2014. Credit: nasatech.net NASA and SpaceX are marching forward towards a Friday, April 18 liftoff attempt for the Falcon 9 rocket sending a commercial Dragon cargo craft on the company’s third resupply mission to the International Space Station following the scrubbed launch attempt on Monday, April 14 – forced by the discovery of a Helium gas leak inside the rocket during the latter stages of the countdown. An on time blastoff of the upgraded Falcon 9 sets the stage for an Easter Sunday rendezvous and berthing of the Dragon resupply spacecraft at the massive orbiting outpost packed with almost 5000 pounds of science experiments and supplies for the six person crew. However the weather prognosis is rather [click to continue…]

Science for celebrities In January 2007, exasperated by the tide of influential and misleading claims made by celebrities in the public sphere, we worked with scientists to produce Making Sense of Science for Celebrities. Each year since, Sense About Science has reviewed the odd science claims people in the public eye have made - about diets, cancer, magnets, radiation and more - sent in to us by scientists and members of the public. Many of these claims promote theories, therapies and campaigns that make no scientific sense. Lingua Franca Writing tutors, teaching assistants, usage columnists, and even word-processor grammar-checkers flag passives for “correction” because they have been told they should. (The disastrously confused Page 18 of Strunk & White’s The Elements of Style is often implicated—but don’t get me started on them.) These critics are often clearly inexpert at accurate identification of what they deprecate: collecting published critical comments about the passive by soi-disant rhetoric gurus, I have found that the most frequently occurring score for telling passives from actives is zero (I put this extraordinary statistic aside to discuss another day). Naturally, the critics also have no idea how many they use themselves.

Latest Mars Weather Captioned Image Release No. MSSS-321 — 16 April 2014 Martian weather between 7 April 2014 and 13 April 2014: The MARCI acquires a global view of the red planet and its weather patterns every day. Please click and play the Quicktime movie (.mov file) to see how the weather on Mars changed during this time. The Alchemist Newsletter: Apr 26, 2012 — Welcome to ChemWeb Aspirin by any other name An international research program has revealed once more that the earliest of commercial pharmaceuticals, aspirin, has yet more roles to play in medicine. The researchers have demonstrated that salicylate, the active metabolite, directly increases the activity of AMP-activated protein kinase. This enzyme is key player in the regulation of cell growth and metabolism and is, figuratively speaking, the cellular fuel-gauge. It is triggered by exercise and by the anti-diabetic medication metformin, so understanding and modulating its activity could be relevant to overweight, obesity and type 2 diabetes. “We show that salicylate increases fat burning and reduces liver fat in obese mice," says McMaster University's Greg Steinberg who is a principal investigator on the project.

Foundational Questions Institute The Foundational Questions Institute (FQXi) To catalyze, support, and disseminate research on questions at the foundations of physics and cosmology, particularly new frontiers and innovative ideas integral to a deep understanding of reality but unlikely to be supported by conventional funding sources. FQXi has five goals: {*style:<ul style="padding-left:20px;"><li> To expand the purview of scientific inquiry to include scientific disciplines fundamental to a deep understanding of reality, but which are currently largely unsupported by conventional grant sources To redress incrementalism in research programming by establishing or expanding new "islands" of understanding via flexible funding of high-risk, high-reward research in these areas

Astronomy Picture of the Day Discover the cosmos! Each day a different image or photograph of our fascinating universe is featured, along with a brief explanation written by a professional astronomer. 2016 April 15 The Story of Science: Power, Proof and Passion For thousands of years we have wrestled with the great questions of existence. Who are we? What is the world made of? How did we get here?

Start Page - The Faculty of Science, University of Gothenburg, Sweden The Faculty of Science The Faculty of Science includes all the major subject areas in the fields of mathematics and natural sciences. With 6 500 students and 730 employees it is the second largest Faculty at the University of Gothenburg. The World Factbook People from nearly every country share information with CIA, and new individuals contact us daily. If you have information you think might interest CIA due to our foreign intelligence collection mission, there are many ways to reach us. If you know of an imminent threat to a location inside the U.S., immediately contact your local law enforcement or FBI Field Office.

Wallpaper Videos See the universe come to life via animations, scientific visualizations, expert commentary, and more. EDGE 2011: What scientific Concept would improve everybody's cognitive toolkit? There's a lot of stuff in the world: trees, cars, galaxies, benzene, the Baths of Caracalla, your pancreas, Ottawa, ennui, Walter Mondale. How does it all fit together? In a word… Supervenience. (Pronounced soo-per-VEEN-yence. Top Sites That Make Science Awesome posted by Elizabeth Harper on April 24, 2013 in Internet & Networking, Computers and Software, Family and Parenting, Kids, Guides & Reviews, Fab Websites :: 0 comments Though you may remember science class as dull, much has changed. The Internet has done the impossible and made science a lot more accessible, bringing scientists and science enthusiasts together to share and discuss the most interesting discoveries of the day. Online, you can find fascinating science news and explanations on YouTube, Facebook, Twitter and more if you know where to look—and it's all a lot more interesting than any high school science textbook. Here's the best of what's out there.