Apollo's Legacy: 50 Years of Lunar Geology. July 20, 1969, will forever be carved into the history books: the day that humankind took its first small step into the cosmos. 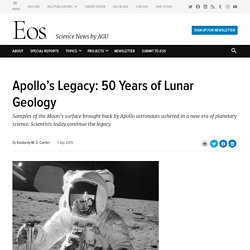 The dawn of a new scientific era came just 4 days later. When Apollo 11 splashed down on 24 July, planetary scientists knew they would soon get their hands on the first samples of material brought back from the surface of the Moon. Apollo 11 astronauts brought back a scant 22 kilograms of material for scientists to study.

Voyages. Search - AstroBin. Contents. National Academies Call for Large Mission to Study Exoplanets. This post is adapted from a National Academies press release: To answer significant questions about planetary systems, such as whether our solar system is a rare phenomenon or if life exists on planets other than Earth, NASA should lead a large direct imaging mission — an advanced space telescope — capable of studying Earth-like exoplanets orbiting Sun-like stars, says a new congressionally mandated report by the National Academies of Sciences, Engineering, and Medicine. 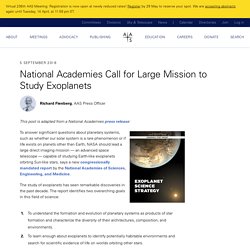 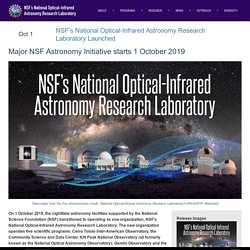 The National Science Foundation (NSF) and the Association of Universities for Research in Astronomy (AURA) are proud to announce the launch of integrated operations of all of NSF’s nighttime astronomical facilities under NSF’s National Optical-Infrared Astronomy Research Laboratory (NSF’s OIR Lab). Patrick McCarthy New Director Over 60 Years of Optical-Infrared Astronomy Programs Cutting Edge Research. Mark Wyatt. My research mostly focusses on the formation and evolution of stars and their planetary systems. 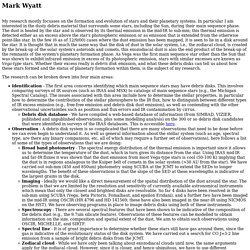 In particular I am interested in the dusty debris material that surrounds some stars, including the Sun, during their main sequence phase. Research resolves a debate over ‘killer electrons’ in space. New findings by a UCLA-led international team of researchers answer a fundamental question about our space environment and will help scientists develop methods to protect valuable telecommunication and navigation satellites. 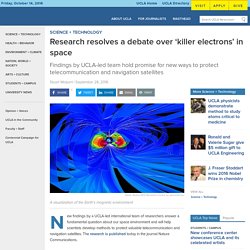 The research is published today in the journal Nature Communications. Using measurements from the first U.S. satellite that traveled to space, Explorer 1 physicist James Van Allen discovered in 1958 that space is radioactive. The Earth is surrounded by two doughnut-shaped rings of highly charged particle radiation — an inner ring of high-energy electrons and positive ions and an outer ring of high-energy electrons — that are now known as Van Allen Radiation Belts. Flying close to the speed of light, the high-energy particles that populate the belts create a harsh environment for satellites and humans in space. Zentrum für Astronomie: Gaia Sky. Asteroseismology of Stellar Populations in the Milky Way. Astronomy Image Explorer. Chandra Sky Map. Guess what? A compelling new mathematical definition makes our humble moon a planet. Over the weekend, the world had to digest the horror of the Paris attacks that killed at least 129 people and injured another 300. 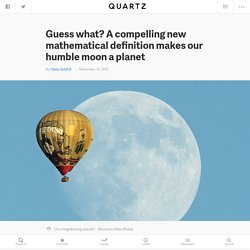 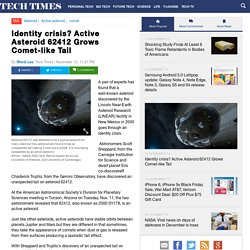 It is now being reclassified as an active asteroid. (Photo : NASA, ESA, M.A. Garlick (space-art.co.uk), University of Warwick, and University of Cambridge.) An asteroid just missed Earth. We won't always be so lucky. On Sunday, September 7 — at 2:15 pm Eastern time, to be exact — a small asteroid whizzed by the Earth. 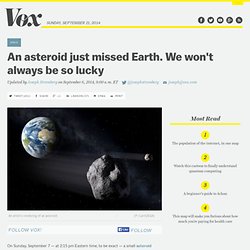 Don't worry: it missed us by about 25,000 miles, though a tiny chunk may have broken off and landed in Nicaragua. But in the long-term, worrying a little about asteroids isn't an unreasonable idea. Now, the odds of a massively destructive asteroid impact at any given time are tiny — but the potential costs would be enormous. Yet we still haven't invested in all the infrastructure needed to spot small asteroids with much warning (we spotted this one less than a week ago). And we've done nothing to develop the ability to divert a larger one if it threatened us.

NASA research gives guideline for future alien life search. Astronomers searching the atmospheres of alien worlds for gases that might be produced by life can't rely on the detection of just one type, such as oxygen, ozone, or methane, because in some cases these gases can be produced non-biologically, according to extensive simulations by researchers in the NASA Astrobiology Institute's Virtual Planetary Laboratory. 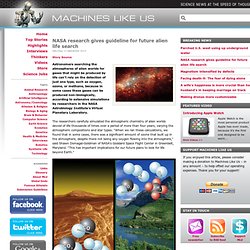 The researchers carefully simulated the atmospheric chemistry of alien worlds devoid of life thousands of times over a period of more than four years, varying the atmospheric compositions and star types. "When we ran these calculations, we found that in some cases, there was a significant amount of ozone that built up in the atmosphere, despite there not being any oxygen flowing into the atmosphere," said Shawn Domagal-Goldman of NASA's Goddard Space Flight Center in Greenbelt, Maryland.

"This has important implications for our future plans to look for life beyond Earth. " Methane is a carbon atom bound to four hydrogen atoms. It All Began in Chaos. The Nice Model. Background. 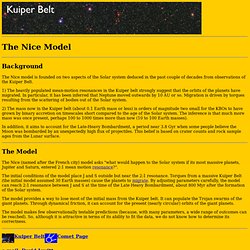