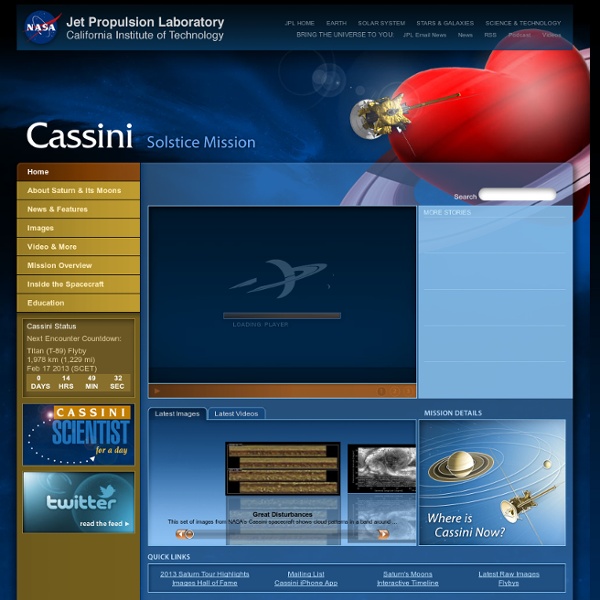 News Blog - Mike Lynch's "Exploding" Telescope Here's a cautionary story about someone who was careful with his observing gear — and still got burned. Some of you probably know (or know of) Mike Lynch, an avid amateur astronomer who hosts frequent star parties in the Minneapolis-St. Paul area. He's the author of several skywatching books, writes a column for the Twin Cities' Pioneer Press, and hosts an astronomy website. You might not know that he's been a meteorologist for radio station WCCO for nearly 30 years. A week ago Lynch headed off to the radio station after observing the night before with his 14½-inch Starmaster Dobsonian. Apollo 11 Flight Journal - Index Page National Aeronautics and Space AdministrationNASA History Division David Woods, Ken MacTaggart and Frank O'Brien Welcome to this 29 March 2011 release of the Apollo 11 Flight Journal, part of the Apollo Flight Journal series. Like its companion, the Apollo Lunar Surface Journal, it is intended to be a resource for all those interested in the Apollo program, whether in a passing or scholarly capacity. This journal covers the flight of Apollo 11, eventually from launch to splashdown.

Signs of Hidden Ocean Underneath Titan's Crust Astronomers' mental image of Titan, the solar system's second-largest moon, used to be that of a vast swimming pool. But maybe they should have imagined a water bed instead. Last year, researchers reported that radar mapping of Titan by the Cassini spacecraft had found a peculiar shift in landmarks on the moon's surface of up to 19 miles (30 kilometers) between October 2004 and May 2007. Now investigators say the best explanation is a moon-wide underground ocean that disconnects Titan's icy crust from its rocky interior.

NASA-engineered collision spills new Moon secrets Scientists led by Brown University are offering the first detailed explanation of the crater formed when a NASA rocket slammed into the Moon last fall and information about the composition of the lunar soil at the poles that never has been sampled. The findings are published in a set of papers in Science stemming from the successful NASA mission, called LCROSS for Lunar CRater Observing and Sensing Satellite. Peter Schultz and graduate student Brendan Hermalyn analyzed data from bits of the Moon’s surface kicked up by a NASA-engineered collision. They found unexpected complexity — and traces of silver. Credit: Mike Cohea/Brown University Mission control at NASA Ames sent the emptied upper stage of a rocket crashing into the Cabeus crater near the Moon’s south pole last October.

Wow! Signal - 30th Anniversary Report Introduction The "Wow!" source radio emission entered the receiver of the Big Ear radio telescope at about 11:16 p.m. 2005 March 28 - A Tether in Space Discover the cosmos! Each day a different image or photograph of our fascinating universe is featured, along with a brief explanation written by a professional astronomer. 2005 March 28 A Tether in Space Credit: TSS-1, STS-46 Crew, NASA

LROC Image Browser :: Homepage > Images :: LROC Browse Gallery « Previous 1 2 3 4 5 6 7 8 9 … 70 71 Next » Recent Scenes from Antarctica - Alan Taylor - In Focus Winter is coming back to Antarctica and, after a busy season for both scientists and tourists, most researchers stationed there have traveled north for the season. Among them were a Russian team that recently came within 30 meters of drilling into Lake Vostok -- a subglacial lake some 4,000 meters below the surface of the ice -- and the crew of the IceCube Neutrino Observatory, who have been burying a massive array of detectors deep in the ice. (They placed their final detector in December.) Gathered here are recent images of Antarctica, its environment, and some of the scientific work taking place there. [47 photos]