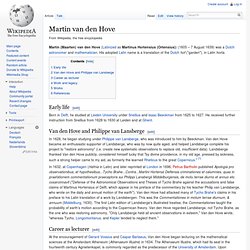 His adopted Latin name is a translation of the Dutch hof ("garden"), in Latin horta. Early life[edit] Born in Delft, he studied at Leiden University under Snellius and Isaac Beeckman from 1625 to 1627. He received further instruction from Snellius from 1628 to 1630 at Leiden and at Ghent. Van den Hove and Philippe van Lansberge[edit] In 1628, he began studying under Philippe van Lansberge, who was introduced to him by Beeckman. 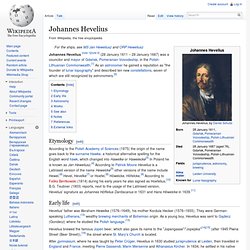 They were German-speaking Lutherans,[12] wealthy brewing merchants of Bohemian origin. As a young boy, Hevelius was sent to Gądecz (Gondecz) where he studied the Polish language.[13] Hevelius brewed the famous Jopen beer, which also gave its name to the "Jopengasse"/"Jopejska"[14][15] (after 1945 Piwna Street (Beer Street)),[16] the street where St.

Astronomy[edit] Throughout his life, Hevelius took a leading part in municipal administration, becoming town councillor in 1651; but from 1639 on, his chief interest was astronomy. The observatory was known by the name Sternenburg[7][18] (Latin: Stellaeburgum; Polish: Gwiezdny Zamek) or "Star Castle"[19] This private observatory was visited by Polish Queen Marie Louise Gonzaga on 29 January 1660. Johannes Hevelius and wife Elisabeth making observations. Jeremiah Horrocks. Jeremiah Horrocks (1618 – 3 January 1641), sometimes given as Jeremiah Horrox (the Latinised version that he used on the Emmanuel College register and in his Latin manuscripts),[1] was an English astronomer. 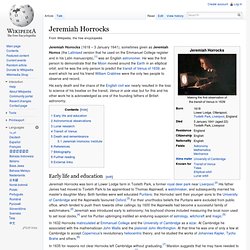 Giovanni Domenico Cassini. Isaac Newton. Sir Isaac Newton PRS MP (/ˈnjuːtən/;[8] 25 December 1642 – 20 March 1726/7[1]) was an English physicist and mathematician (described in his own day as a "natural philosopher") who is widely recognised as one of the most influential scientists of all time and as a key figure in the scientific revolution. 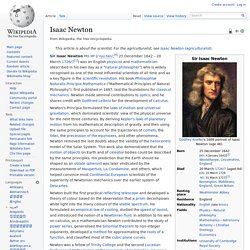 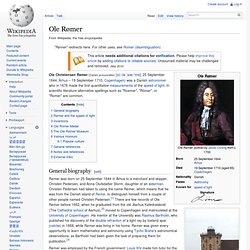 In scientific literature alternative spellings such as "Roemer", "Römer", or "Romer" are common. General biography[edit] Rundetårn, or round tower, in Copenhagen, on top of which the university had its observatory from the mid 17th century until the mid 19th century, when it was moved to new premises. The current observatory there was built in the 20th century to serve amateurs. Rømer's determination of the speed of light. Meridian circle. The similar transit instrument, transit circle or transit telescope is likewise mounted on a horizontal axis, but the axis need not be fixed in the east-west direction. 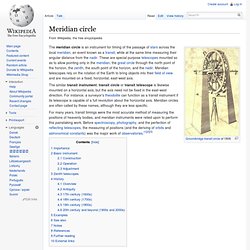 For instance, a surveyor's theodolite can function as a transit instrument if its telescope is capable of a full revolution about the horizontal axis. Meridian circles are often called by these names, although they are less specific. For many years, transit timings were the most accurate method of measuring the positions of heavenly bodies, and meridian instruments were relied upon to perform this painstaking work. Before spectroscopy, photography, and the perfection of reflecting telescopes, the measuring of positions (and the deriving of orbits and astronomical constants) was the major work of observatories.[1][2][3] Importance[edit] Meridian circle at Saint Petersburg Kunstkamera, built by T.L. Basic instrument[edit] Meridian circle at the Kuffner observatory, Vienna, Austria, built by Repsold & Sons, Hamburg, 1886. John Flamsteed. John Flamsteed FRS (19 August 1646 – 31 December 1719) was an English astronomer and the first Astronomer Royal. 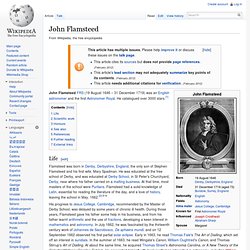 He catalogued over 3000 stars.[1] Life[edit] Flamsteed was born in Denby, Derbyshire, England, the only son of Stephen Flamsteed and his first wife, Mary Spadman. He was educated at the free school of Derby, and was educated at Derby School, in St Peter's Churchyard, Derby, near where his father carried on a malting business. At that time, most masters of the school were Puritans. In September 1670, Flamsteed visited Cambridge and entered his name as an undergraduate at Jesus College.[3] While it seems he never took up full residence, he was there for two months in 1674, and had the opportunity to hear Isaac Newton's Lucasian Lectures.[2]:26 Ordained a deacon, he was preparing to take up a living in Derbyshire when he was invited to London. After his death, his papers and scientific instruments were taken by his widow.

Samuel Molyneux. Samuel Molyneux FRS (16 July 1689 – 13 April 1728), son of William Molyneux, was an 18th-century member of the British parliament from Kew and an amateur astronomer whose work with James Bradley attempting to measure stellar parallax led to the discovery of the aberration of light. 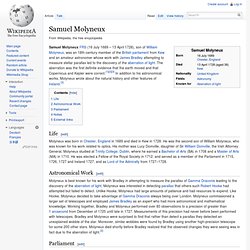 The aberration was the first definite evidence that the earth moved and that Copernicus and Kepler were correct.[1][2][3] In addition to his astronomical works, Molyneux wrote about the natural history and other features of Ireland.[3] Life[edit] Astronomical Work[edit] Molyneux is best known for his work with Bradley in attempting to measure the parallax of Gamma Draconis leading to the discovery of the aberration of light. Molyneux was interested in detecting parallax that others such Robert Hooke had attempted but failed to detect. 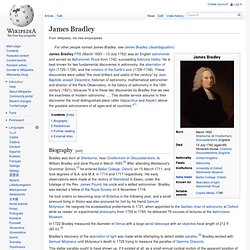 He is best known for two fundamental discoveries in astronomy, the aberration of light (1725–1728), and the nutation of the Earth's axis (1728–1748). These discoveries were called "the most brilliant and useful of the century" by Jean Baptiste Joseph Delambre, historian of astronomy, mathematical astronomer and director of the Paris Observatory, in his history of astronomy in the 18th century (1821), because "It is to these two discoveries by Bradley that we owe the exactness of modern astronomy. .... This double service assures to their discoverer the most distinguished place (after Hipparchus and Kepler) above the greatest astronomers of all ages and all countries.