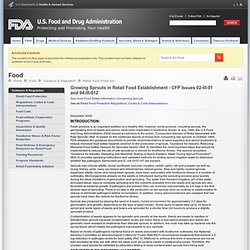 See all Retail Food Protection Regulations, Codes & Code Interpretations . December 2004 Fresh produce is an important addition to a healthy diet, however, some produce, including sprouts, the germinating form of seeds and beans, have been implicated in foodborne illness. In July 1999, the U.S Food and Drug Administration (FDA) issued an advisory to the public, "Consumers Advised of Risks Associated with Raw Sprouts" (Ref. 4) based on the continued reports of illness from consuming raw sprouts. In October 1999, FDA released two guidance documents to provide recommendations to seed suppliers and sprout producers to reduce microbial food safety hazards common to the production of sprouts. Sprouts may include alfalfa, clover, sunflower, broccoli, mustard, radish, garlic, dill and pumpkin as well as mung, kidney, pinto, navy, soy beans and wheat berries (wheat grass). Contamination of seeds appears to be sporadic and usually at low levels. Cottage Food Laws - cottagefoods.org. 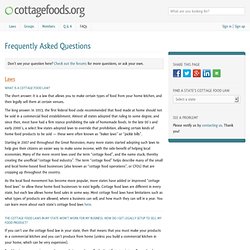 The short answer: It is a law that allows you to make certain types of food from your home kitchen, and then legally sell them at certain venues. The long answer: In 1993, the first federal food code recommended that food made at home should not be sold in a commercial food establishment. Almost all states adopted that ruling to some degree, and since then, most have had a firm stance prohibiting the sale of homemade foods. In the late 90′s and early 2000′s, a select few states adopted laws to override that prohibition, allowing certain kinds of home food products to be sold — these were often known as “baker laws” or “pickle bills”.

Starting in 2007 and throughout the Great Recession, many more states started adopting such laws to help give their citizens an easier way to make some income, with the side-benefit of helping local economies. The cottage food laws in my state won’t work for my business. Can I make food outside of my home? Probably not. American Forum - Fast-Food History. Activity #1: Where Did Our Food Originate? 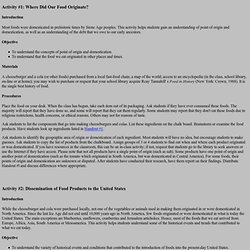 Introduction Most foods were domesticated in prehistoric times by Stone Age peoples. This activity helps students gain an understanding of point of origin and domestication, as well as an understanding of the debt that we owe to our early ancestors. Objective To understand the concepts of point of origin and domestication. Materials A cheeseburger and a cola (or other foods) purchased from a local fast-food chain; a map of the world; access to an encyclopedia (in the class, school library, on-line or at home); you may wish to purchase or request that your school library acquire Reay Tannahill' s Food in History (New York: Crown, 1988).

Procedures Place the food on your desk. Ask students to list the components that go into making cheeseburgers and colas. Ask students to identify the geographic area of origin or domestication of each ingredient. Activity #2: Dissemination of Food Products to the United States Suggestions for Further. End Child Hunger in America. Find out up-to-date hunger statistics for your area. 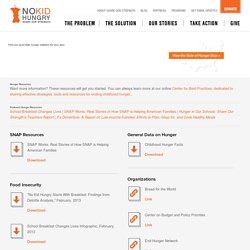