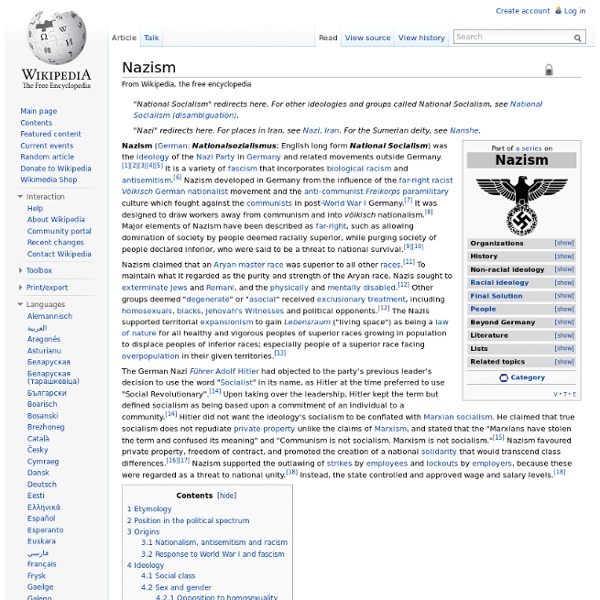 Nazism, or National Socialism in full (German: Nationalsozialismus), is the ideology and practice associated with the 20th-century German Nazi Party and state as well as other related far-right groups. Usually characterised as a form of fascism that incorporates scientific racism and antisemitism, Nazism originally developed from the influences of pan-Germanism, the Völkisch German nationalist movement and the anti-communist Freikorps paramilitary culture in post-First World War Germany, which many Germans felt had been left humiliated by the Treaty of Versailles. German Nazism subscribed to theories of racial hierarchy and social Darwinism, asserted the superiority of an Aryan master race, and criticised both capitalism and communism for being associated with Jewish materialism. The Nazi Party was founded as the pan-German nationalist and antisemitic German Workers' Party in January 1919. Etymology Position in the political spectrum Origins Völkisch nationalism

German Propaganda Archive (Guide Page) Nazi and East German Propaganda Guide Page Propaganda was central to Nazi Germany and the German Democratic Republic. The German Propaganda Archive includes both propaganda itself and material produced for the guidance of propagandists. The goal is to help people understand the two great totalitarian systems of the twentieth century by giving them access to the primary material. For further information on the site, see the FAQ. New items are described in the GPA Blog. Adolf Hitler Adolf Hitler (German: [ˈadɔlf ˈhɪtlɐ]; 20 April 1889 – 30 April 1945) was an Austrian-born German politician who was the leader of the Nazi Party (German: Nationalsozialistische Deutsche Arbeiterpartei (NSDAP); National Socialist German Workers Party). He was Chancellor of Germany from 1933 to 1945 and Führer (leader) of Nazi Germany from 1934 to 1945. As effective dictator of Nazi Germany, Hitler was at the centre of World War II in Europe, and the Holocaust.

Armenian Genocide The Armenian Genocide[7] (Armenian: Հայոց Ցեղասպանություն Hayots Tseghaspanutyun),[8] also known as the Armenian Holocaust, the Armenian Massacres and, traditionally by Armenians, as Medz Yeghern (Armenian: Մեծ Եղեռն, "Great Crime"),[9] was the Ottoman government's systematic extermination of its minority Armenian subjects from their historic homeland within the territory constituting the present-day Republic of Turkey. The total number of people killed as a result has been estimated at between 1 and 1.5 million. The starting date is conventionally held to be 24 April 1915, the day Ottoman authorities rounded up and arrested some 250 Armenian intellectuals and community leaders in Constantinople. Turkey, the successor state of the Ottoman Empire, denies the word genocide is an accurate term for the mass killings of Armenians that began under Ottoman rule in 1915.[22] It has in recent years been faced with repeated calls to recognize them as genocide.

Adolf Hitler Adolf Hitler was born on 20th April, 1889, in the small Austrian town of Braunau near the German border. Both Hitler's parents had come from poor peasant families. His father Alois Hitler, the illegitimate son of a housemaid, was an intelligent and ambitious man and was at the time of Hitler's birth, a senior customs official in Lower Austria. Alois had been married before. In 1873 he had married Anna Glasl, the fifty-year-old adopted daughter of another customs collector. According to Ian Kershaw, the author of Hitler 1889-1936 (1998): "It is unlikely to have been a love-match. Moses Moses (Hebrew: מֹשֶׁה‎, Modern Moshe Tiberian Mōšéh ISO 259-3 Moše ; Syriac: ܡܘܫܐ Moushe; Arabic: موسى‎ Mūsā ) was, according to the Hebrew Bible, the Qur'an, and Baha'i scripture, a former Egyptian prince and warrior,[citation needed] later turned religious leader, lawgiver, and prophet, to whom the authorship of the Torah is traditionally attributed. Also called Moshe Rabbenu in Hebrew (מֹשֶׁה רַבֵּנוּ, Lit. "Moses our Teacher/Rabbi"), he is the most important prophet in Judaism.[1][2] He is also an important prophet in Christianity and Islam, as well as a number of other faiths. According to the Book of Exodus, Moses was born in a time when his people, the Children of Israel, were increasing in numbers and the Egyptian Pharaoh was worried that they might ally with Egypt's enemies. God sent Moses back to Egypt to demand the release of the Israelites from slavery. Name

Rwanda Genocide - A Short History of the Rwanda Genocide What Was the Rwanda Genocide Beginning on April 6, 1994, Hutus began slaughtering the Tutsis in the African country of Rwanda. As the brutal killings continued, the world stood idly by and just watched the slaughter. Lasting 100 days, the Rwanda genocide left approximately 800,000 Tutsis and Hutu sympathizers dead.

Adolf Hitler Adolf Hitler, a charismatic, Austrian-born demagogue, rose to power in Germany during the 1920s and early 1930s at a time of social, political, and economic upheaval. Failing to take power by force in 1923, he eventually won power by democratic means. Once in power, he eliminated all opposition and launched an ambitious program of world domination and elimination of the Jews, paralleling ideas he advanced in his book, Mein Kampf. His "1,000 Year Reich" barely lasted 12 years and he died a broken and defeated man. 1. German Jews during the Holocaust 1933-1939 In January 1933, some 522,000 Jews by religious definition lived in Germany. Over half of these individuals, approximately 304,000 Jews, emigrated during the first six years of the Nazi dictatorship, leaving only approximately 214,000 Jews in Germany proper (1937 borders) on the eve of World War II. In the years between 1933 and 1939, the Nazi regime had brought radical and daunting social, economic, and communal change to the German Jewish community. Six years of Nazi-sponsored legislation had marginalized and disenfranchised Germany's Jewish citizenry and had expelled Jews from the professions and from commercial life. By early 1939, only about 16 percent of Jewish breadwinners had steady employment of any kind. Thousands of Jews remained interned in concentration camps following the mass arrests in the aftermath of Kristallnacht (Night of the Broken Glass) in November 1938.

Nicolae Ceaușescu Nicolae Ceaușescu (/ˌniːkɔːˈlaɪ tʃaʊˈʃɛskuː/[1] NEE-koh-LY chow-SHES-koo; Romanian: [nikoˈla.e t͡ʃe̯a.uˈʃesku]; 26 January 1918[2] – 25 December 1989) was a Romanian communist politician. He was General Secretary of the Romanian Communist Party from 1965 to 1989, and as such was the country's second and last Communist leader. He was also the country's head of state from 1967 to 1989. A member of the Romanian Communist youth movement, Ceaușescu rose up through the ranks of Gheorghe Gheorghiu-Dej's Socialist government and, upon the death of Gheorghiu-Dej in 1965, he succeeded to the leadership of Romania’s Communist Party as General Secretary. After a brief period of relatively moderate rule, Ceaușescu's regime became increasingly brutal and repressive.

History of the Jews during World War II Group of Jewish parachutists under British command, who was sent into Slovakia. Palestine, wartime World War II is the most tragic period in Jewish history. German Nazi occupied Europe[edit] By World War II, nearly all Jewish companies had either collapsed under financial pressure and declining profits, or had been forced to sell out to the Nazi-German government as part of the "Aryanization" policy inaugurated in 1937. As the war started, large massacres of Jews took place. Jallianwala Bagh massacre The Jallianwala Bagh massacre, also known as the Amritsar massacre, was a seminal event in the British rule of India. On 13 April 1919, a crowd of non-violent protesters, along with Baishakhi pilgrims, had gathered in the Jallianwala Bagh garden in Amritsar, Punjab to protest the arrest of two leaders despite a curfew which had been recently declared.[1] On the orders of Brigadier-General Reginald Dyer, the army fired on the crowd for ten minutes, directing their bullets largely towards the few open gates through which people were trying to run out. The dead numbered between 370 and 1,000, or possibly more.

The Nazis thought the germans were the superior race of society. They then try to change society by making it better by exterminating the jewish and handicap people. In sweetgrass basket, they send the aboriginal children to residential schools to change their way of living. I find this relates very well to Nazism because in both cases theyre trying to make society better by making it more powerful by changing the way of living of people, by either killing them or changing their way of living in the schools. by shaynuswardus Oct 31

The nazis made the citizens believe that their race was superior. They said that blond hair and blue eyes were pure and their goal was to eliminate the jews, as they were not pure. In Sweetgrass basket, Mrs Dwyer stripped the aboriginals of their culture to teach them the american way of life. Her and the teachers aslo spoke down on them telling them that they will go to hell because they are aboriginals. by stephnso Oct 30

The Nazis, in Germany, thought they were superior because they occupied the majority of the society. They controlled, manipulated, and brainwashed the citizens. This horrible community reminds me of the teachers at the Resident School in Sweetgrass Basket. Especially Mrs. Dwyer, the principal, believes that because she is superior, she has the power to manipulate and hurt, not only emonationally but also physacilly, the students. by sofiapetsalis Oct 29

I find that the Nazi way of mind could be very well compared with the industrious way of mind of the teachers at the residential school. Both parties can be related to the cause of loss culture in different societies. by gomezguay Oct 29