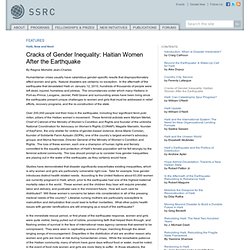 Natural disasters are certainly no exception. Haiti - Gender Equality: the Right and Smart Thing to Do – World Bank Report. "When it rains, we will grow again": Haitian Women Observe International Women's Day. Haiti: Human Rights Organization Alarmed at Rise of Insecurity. Friday, March 16, 2012 3:35 PM RNDDH Director Pierre Esperance PORT-AU-PRINCE, Haiti (defend.ht) - The National Network for the Defense of Human Rights (RNDDH) is deeply concerned by the rise of insecurity and organized violence in Haiti, particularly in the metropolitan area of Port-au-Prince, at a time when the Haitian authorities talk about establishing a rule of law in the country. 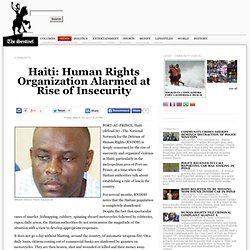 For several months, RNDDH notes that the Haitian population is completely abandoned. Despite the fact that spectacular cases of murder, kidnapping, robbery, spinning aboard motorcycles followed by robberies, rapes, daily arson, the Haitian authorities do not seem assess the magnitude of the situation with a view to develop appropriate responses. It does not go a day without blasting, around the country, of automatic weapons fire. For the only period January 1 to March 14, 2012, at least one hundred forty-seven (147) people were killed, one hundred thirty (130) shot.

Murders Fire. Kim Kardashian: We Came to Haiti to Celebrate... Who knew a woman who runs around on TV with a gun and another who runs around in heels would have so much in common? 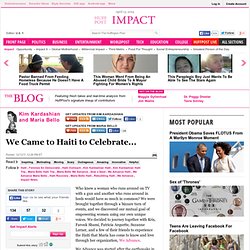 We were brought together through a bizzare turn of events, and we discovered our mutual goal of empowering women using our own unique voices. We decided to journey together with Kris, Farouk Shami, Patricia Arquette, Suzanne Lerner, and a few of their friends to experience the Haiti that Maria has come to know and love through her organization, We Advance. We Advance was started after the earthquake in January 2010, as a direct response to the increase in gender-based violence and poor health care for women in the poorest areas of the country.

We Advance works with and represents the voices of over 40 micro-organizations working in the most desperate situations and communities in Haiti. This is who we celebrated: Danielle St. Community of Women Entrepreneurs » Blog Archive » Women Advance the Fundamentals for Haiti’s Future. Haitian president Michel Martelly visits the women involved in drafting a National Platform of Action in Port-au-Prince on March 1, 2012. 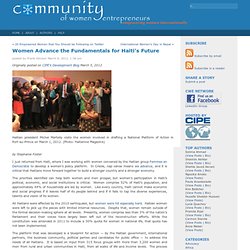 (Photo: Haitienne Magazine) by Stephanie Foster I just returned from Haiti, where I was working with women convened by the Haitian group Femmes en Democratie to develop a women’s policy platform. In Creole, nap vanse means we advance, and it is critical that Haitians move forward together to build a stronger country and a stronger economy. Pathway’s Entrepreneurs Demonstrate Solidary With Women of Haiti.

About the Author: Marsha McLean serves as Senior Consultant in the Bureau of Western Hemisphere Affairs Office of Public Diplomacy. 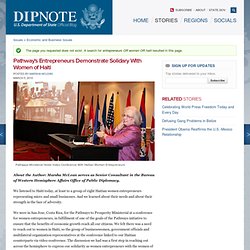 We listened to Haiti today, at least to a group of eight Haitian women entrepreneurs representing micro and small businesses. And we learned about their needs and about their strength in the face of adversity. We were in San Jose, Costa Rica, for the Pathways to Prosperity Ministerial at a conference for women entrepreneurs, in fulfillment of one of the goals of the Pathways initiative to ensure that the benefits of economic growth reach all our citizens. We felt there was a need to reach out to women in Haiti, so the group of businesswomen, government officials and multilateral organization representatives at the conference linked to our Haitian counterparts via video-conference.

As we listened to the Haitian entrepreneurs' stories, we were struck by their courage and perseverance. Maria Bello: Women Key to Haitian Rebuilding. Voters in Haiti go to the polls on Sunday, March 20, 2011 to elect a new president and a new Parliament. 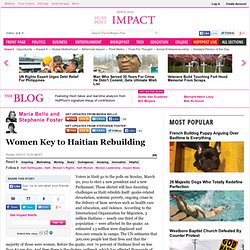 Those elected will face daunting challenges as Haiti rebuilds itself: quake-related devastation, systemic poverty, ongoing crises in the delivery of basic services such as health care and education, and violence. According to the International Organization for Migration, 3 million Haitians -- nearly one third of the population -- were affected by the quake; an estimated 1.3 million were displaced and 800,000 remain in camps. The UN estimates that 300,000 people lost their lives and that the majority of those were women.

Before the quake, over 70 percent of Haitians lived on less than $2 per day. Fonkoze - Haiti's leading microfinance institution. Women & Gender. Key Statistics Prior to the January 2010 Earthquake 44 percent of all households are female headed households.1 60 percent of female headed households are living in extreme poverty.2 83 percent of economically active women work within the informal sector.3 26 percent of all women and girls (15 years+) have been victims of sexual and gender-based violence.4 Women comprise less than 13 percent of the Senate and 4 percent of the Lower Chamber.5 Despite significant progress in promoting women’s rights, considerable gender disparities persist. 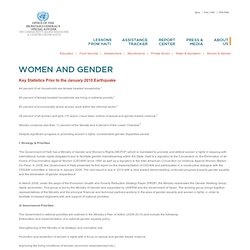 I. FEMMES EN DEMOCRATIE. Rebuilding Haiti Will Take A Village Of Women. WIP_HOME.